Analytics and trading signals for beginners. How to trade EUR/USD on August 11. Analysis of Tuesday. Getting ready for Wednesday 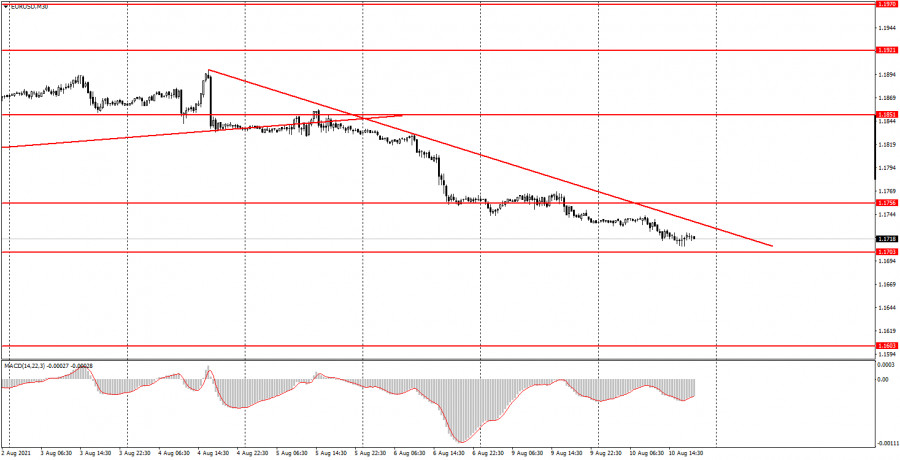 The EUR/USD pair continued its downward movement on Tuesday. Recently, a new downward trend line has been formed, which supports the bearish traders at this time. However, the volatility of the euro/dollar pair remains extremely weak, therefore, although there is a downward movement, it is very difficult to work it out. Today the MACD indicator turned down only once on the 30-minute timeframe, which could be interpreted by novice traders as a sell signal. However, the indicator generated a signal that was too low, below the zero level, so it should not have been worked out. It should also be noted that there was no important macroeconomic or fundamental event in the European Union and the United States on Tuesday. Therefore, the volatility of the day, equal to 33 points, is quite logical and understandable. And, of course, we note once again that it is extremely difficult to trade the pair with such volatility. 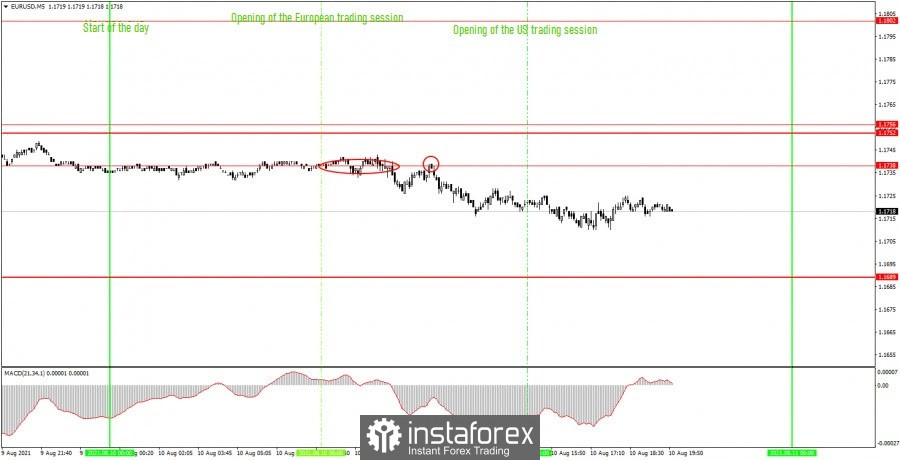 Meanwhile, the movement looks exactly as it really is on the 5-minute timeframe. Simply put, during the day, the downward movement was the weakest, so it was very difficult to work out. Nevertheless, two sell signals were generated on Tuesday. If the first signal was not clear and not accurate, then the second one is already much better. However, in any case, whichever of these signals was used by novice traders to open a short position, there should have been one, since at the moment of the formation of the second signal in the form of a rebound from the level of 1.1738, the first deal was not closed either by Stop Loss or by Take Profit. However, the price did not even reach the nearest target level of 1.1689 during the day, and could not go down a total of 30 points, which would have been enough to trigger the least Take Profit. Thus, the short position should have been manually closed in the late afternoon. In this case, the profit on it would be about 20 points, which is an excellent result in conditions of low volatility.

The EUR/USD pair continues a very weak downward movement on the 30-minute timeframe. However, the downward trend continues, so short positions should be considered. As long as the trend line remains relevant, novice traders can pay attention to the signals from the MACD indicator, which are formed near the zero level. Also, a rebound from a trend line can act as a sell signal, and a buy signal can be overcome. On the 5-minute timeframe, it is recommended to trade from the levels of 1.1689, 1.1738, 1.1752 (1.1756), 1.1802. Take Profit, as before, is set at a distance of 30-40 points. Stop Loss - to breakeven when the price passes in the right direction by 15-20 points. At the 5M TF, the target can be the nearest level if it is not too close or too far away. If located - then you should act according to the situation. A very important inflation report is due out in America on Wednesday, which could spark a strong market reaction. Therefore, during its publication, novice traders should exercise the utmost care.

Interesting? Write a comment below.
 Analytics and trading signals for beginners. How to trade EUR/USD on August 11. Analysis of Tuesday. Getting ready for Wednesday
Forward 
Backward 