Analytics and trading signals for beginners. How to trade EUR/USD on August 12. Analysis of Wednesday. Getting ready for 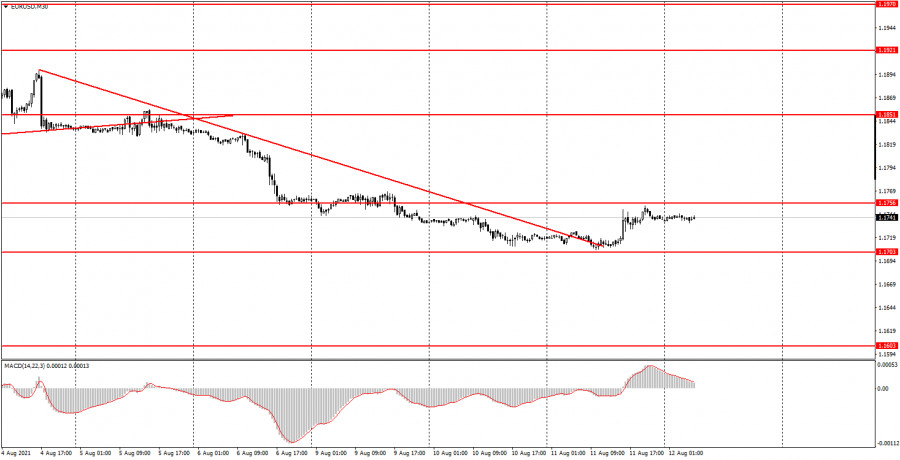 The EUR/USD pair continued to move very sluggishly on Wednesday. Throughout the European trading session, the quotes of the pair, in fact, stood in one place. A more or less strong movement began only with the beginning of the US session, thanks to which the pair rose to the level of 1.1752. Naturally, this movement did not happen out of the blue. A report on inflation was published at the very beginning of the US session in America, which recently rose to 5.4%, which is a 13-year high. Therefore, most traders, based on the statements of Federal Reserve Chairman Jerome Powell, believed that inflation will slightly decrease in July. However, this did not happen. The consumer price index remained at 5.4%, which somewhat disappointed dollar bulls. Therefore, in the second half of the day, the US currency fell (= growth of the euro/dollar pair). Thus, on the one hand, it is gratifying that this important report has been worked through and not ignored. On the other hand, the reaction was rather weak. The pair also broke the downward trend line, so the downward trend can be considered complete for now. 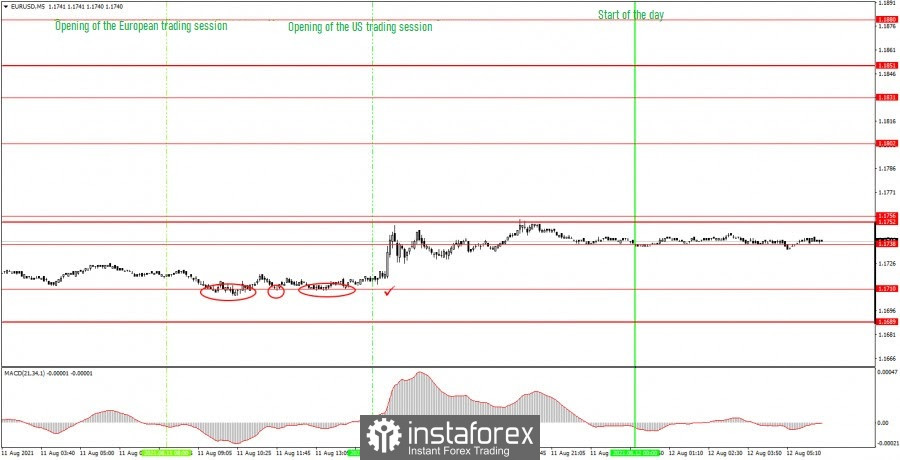 Meanwhile, the movement on the 5-minute timeframe looks rather complex. Three buy signals were formed at once in the first half of the day - all in the form of rebounds from the level of 1.1710, which is the previous day's low. Based on these signals, it was possible to open a long position, but only one, since each subsequent signal simply duplicated the previous one. However, these signals would not have brought any profit if it were not for the US inflation report. We always warn novice traders to trade with extreme caution or leave the market before publishing important reports. Yesterday, since the transaction at the time when the inflation report was published was in the least amount of profit, it was possible to set the Stop Loss level just below the level of 1.1710 in case inflation was below the forecast value and would provoke the dollar to rise. However, in the end, the pair moved up and passed a total of 30 points after the formation of a buy signal. And in the end it reached the level of 1.1752. However, before doing this, it crossed the 1.1738 level several times, which is no longer relevant. However, no deals should have been opened near it, since these signals were generated immediately after the US inflation report was published.

The EUR/USD pair completed the downward movement on the 30-minute timeframe. At the moment, the pair has made the first upward spurt, which may be the beginning of a new upward trend. Thus, formally, we can now consider buy signals from the MACD indicator, but it should be remembered that the volatility for the pair remains low. On a 5-minute timeframe, it is recommended to trade from the levels 1.1689, 1.1710, 1.1752 (1.1756), 1.1802. Take Profit, as before, is set at a distance of 30-40 points. Stop Loss - to breakeven when the price passes in the right direction by 15-20 points. At the 5M TF, the target can be the nearest level if it is not too close or too far away. If located - then you should act according to the situation. On Thursday, novice traders will have nothing to pay attention to in the European Union and America. There will be no important macroeconomic publications and events on 12 August.

Interesting? Write a comment below.
 Analytics and trading signals for beginners. How to trade EUR/USD on August 12. Analysis of Wednesday. Getting ready for
Forward 
Backward 