Analytics and trading signals for beginners. How to trade EUR/USD on August 20. Analysis of Thursday. Getting ready for Friday 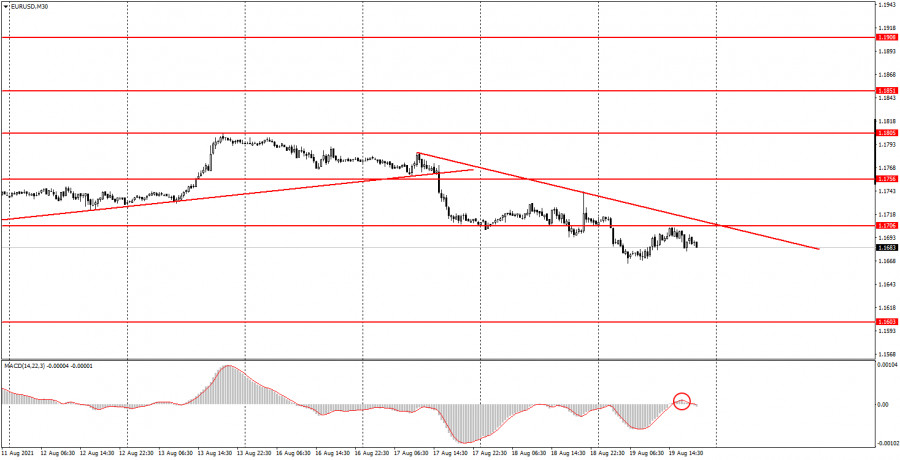 The EUR/USD pair moved in different directions all day on Thursday. Each individual movement should be considered here. Yesterday evening, at about 9 o'clock (GMT +3), the pair jumped by 50 points in ten minutes. This movement was provoked solely by the publication of the Federal Reserve's minutes from their last meeting. This point should be explained to novice traders. Markets rarely react to Fed minutes. Simply because the minutes themselves rarely contain information that was not announced immediately after the central bank's meeting. And Wednesday night's events were no exception. After the publication of the minutes, the markets could only draw one conclusion: the Fed and members of its monetary committee continue to prepare to wind down the quantitative stimulus program, which is a bullish factor for the US dollar. And this information was not new! Simply put, the more likely it is to hear from the Fed about the completion of the QE program and the sooner this happens, the more chances for the dollar to rise. However, the dollar did not rise on Wednesday night! It got cheaper. Therefore, in principle, there is no need to talk about a logical reaction of the market. But the dollar rose during the whole night and in the morning it was around the level of 1.1666. And during the rest of the day, it corrected against this movement. A downward trend line has formed during the day, so the downward trend is maintained until the price settles above it. During the day, a sell signal from the MACD indicator has also formed, which can be worked out by setting the Stop Loss level above the entry point. 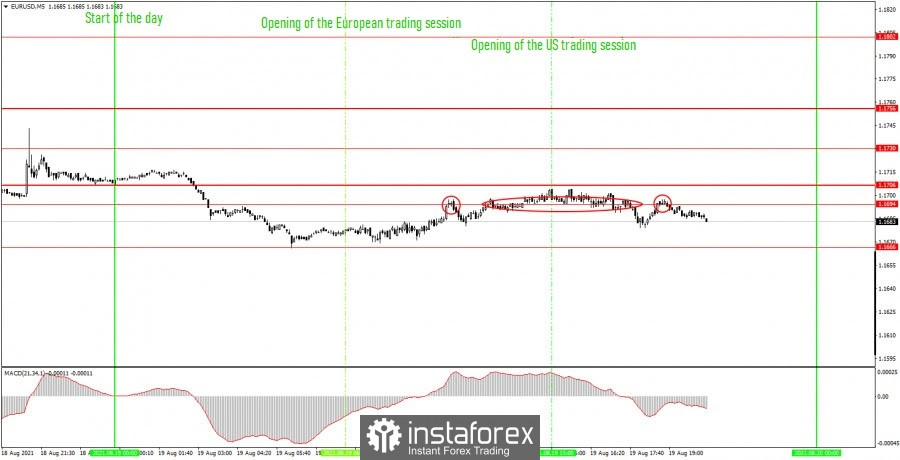 The picture of the pair's movements on the 5-minute timeframe looks very boring. Let's start with the fact that not a single profitable signal was generated during the day. The pair spent most of the day near the level of 1.1694 in an absolute flat (marked with a longitudinal oval), and before and after that the oval formed one sell signal in the form of rebounds from the level of 1.1694. Beginners could have worked out the first sell signal, since at that time it was still unclear that the pair would stay flat for half a day. After the formation of this sell signal, the price went down by only 9 points, which was not enough even to set the Stop Loss level to breakeven. Thus, for this trade, a loss of about 9-10 points was received, and the trade should have been closed when the price overcame the level of 1.1694. This was followed by a period of flat, during which, of course, one should not open positions. And the last sell signal should be ignored, since at that moment it was already clear what movement was observed in the pair on Thursday.

The EUR/USD pair continues to move downward on the 30-minute timeframe, not too strong. Thus, before the price settles above the trend line, novice traders can track sell signals from the MACD indicator. One such signal was generated a few hours ago and now a short position can be supported by it. On the 5-minute timeframe, it is recommended to trade from the levels 1.1666, 1.1694, 1.1706, 1.1730, 1.1756. Take Profit, as before, is set at a distance of 30-40 points. Stop Loss - to breakeven when the price passes in the right direction by 15-20 points. At the 5M TF, the target can be the nearest level if it is not too close or too far away. If located - then you should act according to the situation. The European Union and the United States will not publish any important reports on Friday, nor will there be any other fundamental event. Therefore, with a high degree of probability, either a flat or a low-volatility movement will again be observed during the day.

Interesting? Write a comment below.
 Analytics and trading signals for beginners. How to trade EUR/USD on August 20. Analysis of Thursday. Getting ready for Friday
Forward 
Backward 