Analytics and trading signals for beginners. How to trade EUR/USD on August 23 Analysis of Friday. Getting ready for Monday 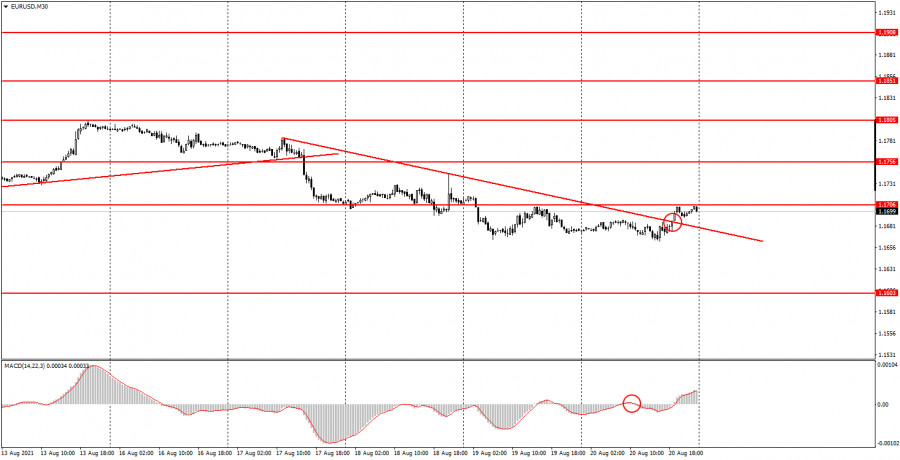 The EUR/USD pair continued to trade very sluggishly on Friday. Although, relative to the last trading days, volatility of 40 points is already the norm. Recall that in the past few weeks, the volatility of the trading instrument has dramatically decreased. If the pair usually passed 60-80 points a day, now, in most cases, 30-50. Naturally, trading does not become easier in such conditions. On the contrary, the number of trading signals has greatly decreased. Moreover, the trends have been very weak lately. For example, on Friday, the price broke the downward trend line that had formed two days earlier. However, at the same time, the pair was unable to overcome the nearest resistance level of 1.1706. Thus, on Friday, novice traders had two signals at once on the 30-minute timeframe. One to sell, when the downward trend line was still relevant, and the second to buy, when the trend line was broken. It was not possible to earn money either on the first signal or on the second. In the first case, the pair went down 17 points, which was enough to set the Stop Loss level to breakeven, at which the deal was eventually closed. In the second case, the trade should not have been opened at all, since the signal was formed late in the evening before the market closed. It should also be noted that no important macroeconomic reports were released on Friday in either the EU or the US. 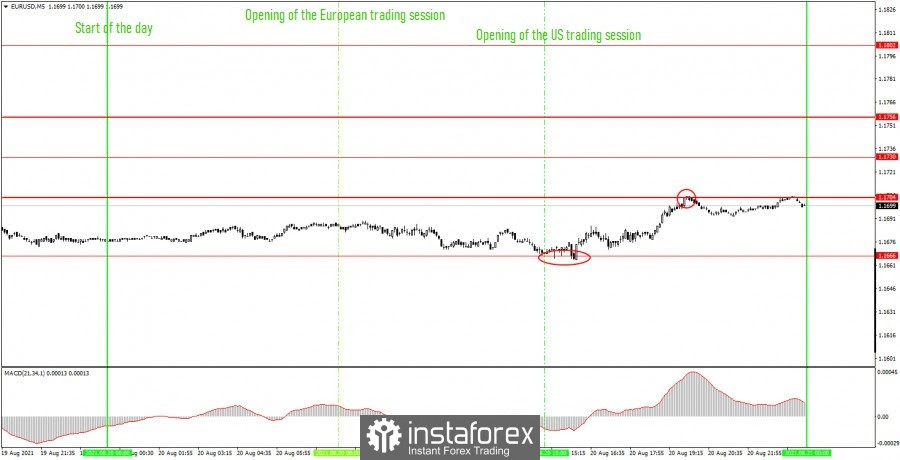 The picture of the pair's movements on the 5-minute timeframe last Friday looks much more attractive. Although the level of volatility was weak, the price still moved smoothly without sharp reversals and changes in the direction of movement. In the first half of the day there was a decrease, in the second - an increase. It was in the second half of the day, at the very beginning of the US trading session, that the only signal of the day was formed on this timeframe. The price just perfectly reached the level of 1.1666, which is the previous trading day's low, and bounced off it. Thus, novice traders had to open long positions here. Subsequently, the price went up 30 points, which is enough to trigger the minimum Take Profit, and also reached the level of 1.1704, around which it was also possible to take profit. Thus, in any case, it was possible to earn about 30 points of profit.

The EUR/USD pair has settled above the downward trend line on the 30-minute timeframe, so buy signals should be considered. However, at the same time, the pair failed to settle above the level of 1.1704, so further upward movement is also questionable. The pair may go flat for several days. Therefore, we recommend trading up if the price settles above the level of 1.1704. On the 5-minute timeframe, it is recommended to trade from the levels 1.1666, 1.1704, 1.1730, 1.1756. Take Profit, as before, is set at a distance of 30-40 points. Stop Loss - to breakeven when the price passes in the right direction by 15-20 points. At the 5M TF, the target can be the nearest level if it is not too close or too far away. If located - then you should act according to the situation. On Monday, the European Union and the United States will publish indexes of business activity in the areas of manufacturing and services. Under certain circumstances, they can cause a mild reaction from the market, but the chances for this are few.

Interesting? Write a comment below.
 Analytics and trading signals for beginners. How to trade EUR/USD on August 23 Analysis of Friday. Getting ready for Monday
Forward 
Backward 