Analytics and trading signals for beginners. How to trade EUR/USD on August 24. Analysis of Monday. Getting ready for Tuesday 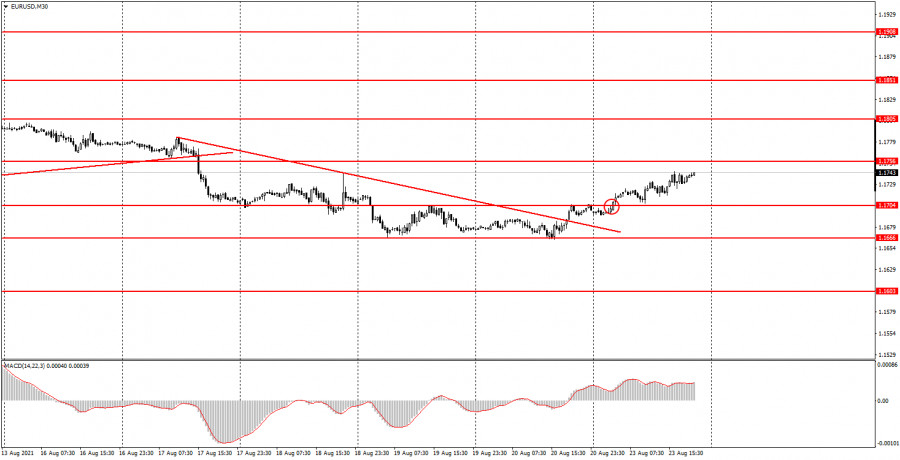 The EUR/USD pair continued to trade very sluggishly on Monday. If on Friday it passed about 40 points from the low to the high of the day, then on Monday it was at 50 points. However, there were macroeconomic reports in America and in the European Union on Monday! Not the most important ones, but are still reports. However, looking ahead, it should be noted that the markets ignored all six PMIs that were published in the US and the EU. However, the essence of the matter does not change from this. The main thing is that the pair crossed the downward trend line on the 30-minute timeframe, which now makes the upward trend relevant. Unfortunately, on Monday there was not a single signal on the current timeframe that could be worked out. The only signal - a breakthrough of 1.1704 - was formed at night, so it did not work out. It's a pity, it could bring a good profit. In general, the technical picture has not changed by the end of Monday. We are still waiting for an upward movement and now there are all technical grounds for this. 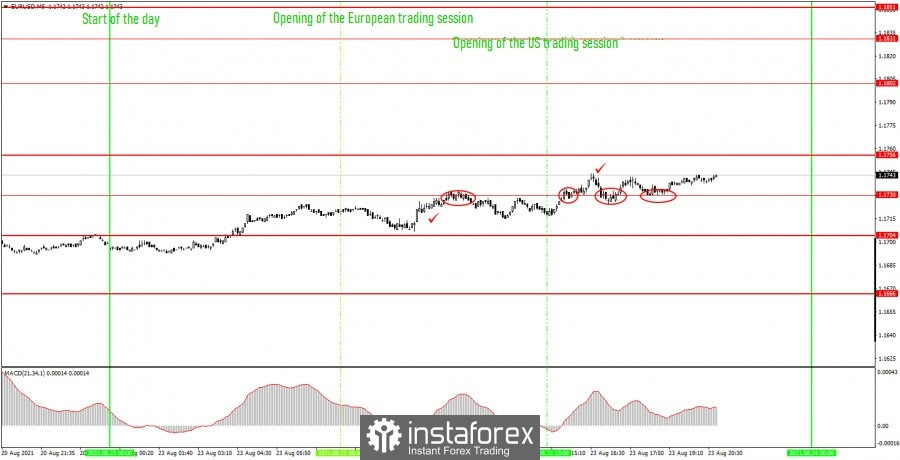 The picture of the pair's movements looks much more boring and depressing on the 5-minute timeframe. Movement during the daytime was weak. All signals formed around the 1.1730 level. The tick marks indicate the time when the reports were published in the United States and the European Union. As you can see, there was no market reaction to the reports. Let's analyze trading signals. The first sell signal was formed in the middle of the European session. The price bounced off the 1.1730 level, so novice traders could open short positions here. However, the pair could not go down after this signal and 10 points, after which it returned to the level of 1.1730 and settled above it. Therefore, at this moment, it was necessary to manually close the short position, at a loss of about 10 points and open a long position. However, the upward movement after this signal also could not continue. The price returned twice to the level of 1.1730, bounced off it, but at the same time could not go up at least 15-20 points. However, the long position had to be open all this time, since the price did not go below the level of 1.1730. Therefore, towards evening, novice traders could already manually close longs, earning 7 points. Thus, the first trading day of the week ended without losses.

The EUR/USD pair has settled above the downward trend line on the 30-minute timeframe, so buy signals should be considered. The pair managed to settle above the level of 1.1704, so further upward movement may gain momentum. The fact that the upward movement continued on Monday is a good signal. Therefore, we recommend considering buy signals from the MACD indicator when it falls to the zero level. On the 5-minute timeframe, it is recommended to trade from the levels 1.1666, 1.1704, 1.1730, 1.1756, 1.1802. Take Profit, as before, is set at a distance of 30-40 points. Stop Loss - to breakeven when the price passes in the right direction by 15 points. At 5M TF, the target can be the nearest level if it is not too close or too far away. If located - then you should act according to the situation. Neither the European Union nor the United States will publish a single important report on Tuesday. Thus, the pair may go flat tomorrow, again with low volatility.

Interesting? Write a comment below.
 Analytics and trading signals for beginners. How to trade EUR/USD on August 24. Analysis of Monday. Getting ready for Tuesday
Forward 
Backward 