Analytics and trading signals for beginners. How to trade GBP/USD on August 9. Analysis of Friday. Getting ready for Monday 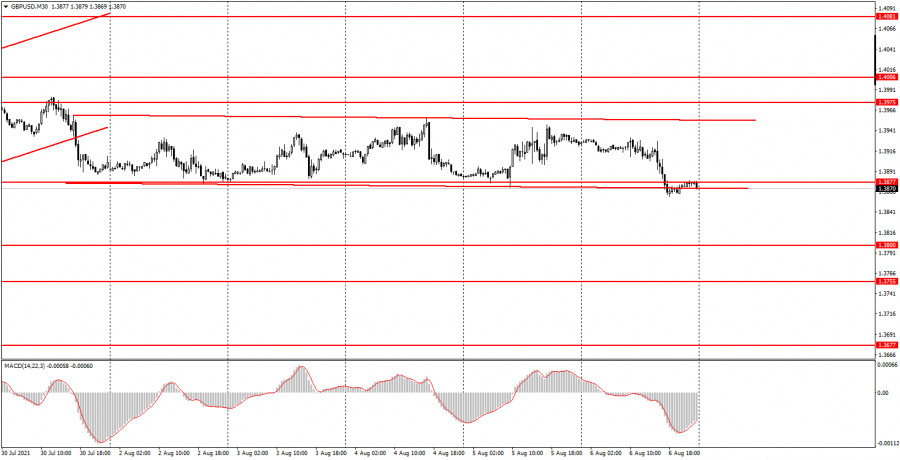 The GBP/USD pair decreased by 70 points on the 30-minute timeframe on Friday, which is less than the downward movement of the EUR/USD pair. The most strange behavior of the pound/dollar pair, since the macroeconomic background for both major pairs was the same, and the euro/dollar eventually moved more volatile. However, the pound/dollar pair, in addition to this, was in a horizontal channel all week, which is not formal or conditional, as is the case with the euro/dollar pair. It is quite real and shown. Therefore, you shouldn't have traded on the 30 minute timeframe last week. We state that there is no trend at this time. As for macroeconomic events, the summing up of the Bank of England (BoE) meeting took place in the UK last week, which did not give any particularly important information to traders. The pound only slightly rose on Thursday on one or two hawkish hints from the British central bank and BoE Chairman Andrew Bailey. On Friday, the US dollar was already growing, as not only the NonFarm Payrolls report was strong, but also the unemployment rate and average wages in the US. The first indicator fell to 5.4%, while the second increased by 0.4% m/m. 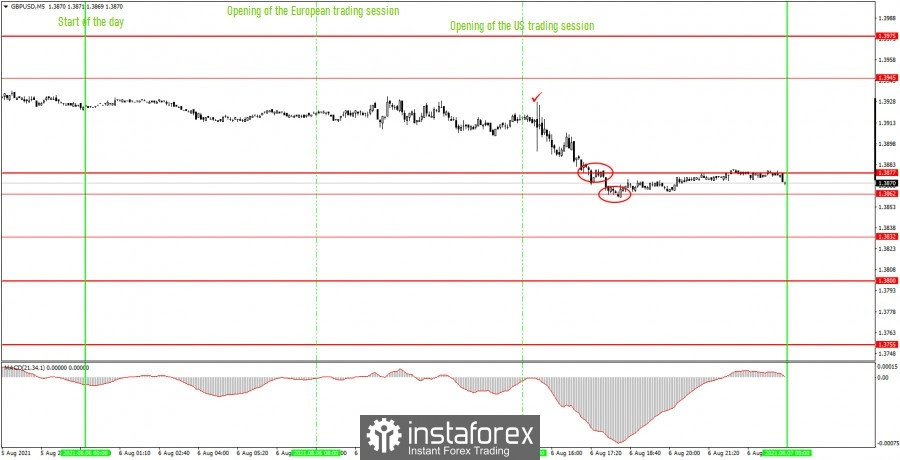 On the 5-minute timeframe, there was a much less attractive movement than on the EUR/USD pair. Although, we recall that the fundamental and macroeconomic background on this day for both pairs were the same. However, the pound/dollar pair, firstly, during the most attractive time for trading, did not approach important levels, thus, without forming a single trading signal, and secondly, it spent the entire European trading session in absolute flat. Thus, novice traders simply had nothing to work out during the day. Only in the middle of the US trading session, when all the most important trading reports had already been published and the entire movement had, in fact, ended, the pair reached the level of 1.3877, and then - 1.3862. However, these signals should not have been worked out any more, since they formed at the end of the trading day and at the end of the trading week.

On the 30-minute timeframe, the pound/dollar pair dropped to the lower border of the horizontal channel. Therefore, in general, the pair remains flat, within which, of course, it is not recommended to trade. That is, there is no trend now on the 30-minute timeframe, and signals from the MACD indicator should not be worked out. If the price settles below the horizontal channel, it can trigger the formation of a new downward trend. The important levels on the 5 minute timeframe are 1.3832, 1.3862, 1.3877 and 1.3945. We recommend trading with them. The price can bounce off them or go beyond them. As before, we set Take Profit at a distance of 40-50 points. At the 5M TF, you can use all the nearest levels as targets, but then you need to take profit, taking into account the strength of the movement. When passing 20 points in the right direction, we recommend setting Stop Loss to breakeven. There are no major macroeconomic or fundamental events scheduled for Monday in the UK and the US. Therefore, novice traders will have to trade tomorrow on a pure technique. Let us remind you that on Mondays there is often extremely low volatility and flat.

Interesting? Write a comment below.
 Analytics and trading signals for beginners. How to trade GBP/USD on August 9. Analysis of Friday. Getting ready for Monday
Forward 
Backward 