Analytics and trading signals for beginners. How to trade EUR/USD on August 6. Analysis of Thursday. Getting ready for Friday 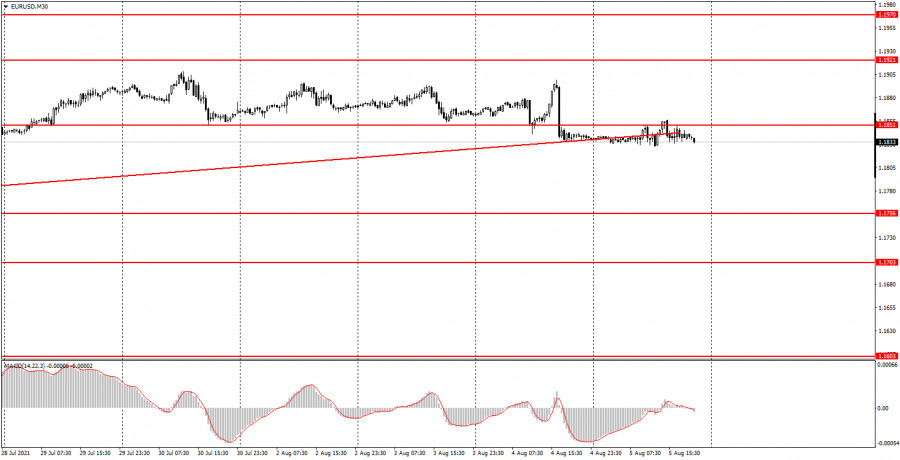 The EUR/USD pair was not traded at all on Thursday. Both the volatility of the pair and its "trend movement" during the day are clearly visible on the 30-minute timeframe. The pair stood all day in one place, and the daily volatility was an unrealistic 28 points. On the one hand, given the complete absence of macroeconomic statistics, it is not surprising that the movements were weak. On the other hand, everything has a limit and 28 points per day - this is even below the lowest limit. In general, there is absolutely nothing to highlight on the 30-minute timeframe. The price could not really overcome the uptrend line, nor bounce off it. Thus, we cannot even conclude at the moment whether the upward trend can be considered no longer relevant. And this despite the fact that last week, the euro/dollar pair spent in the range of 1.1828 - 1.1909. That is, almost in absolute flat, but all this time the upward trend has been preserved. In general, due to the weakest volatility, novice traders can see many paradoxical situations and moments on the chart. 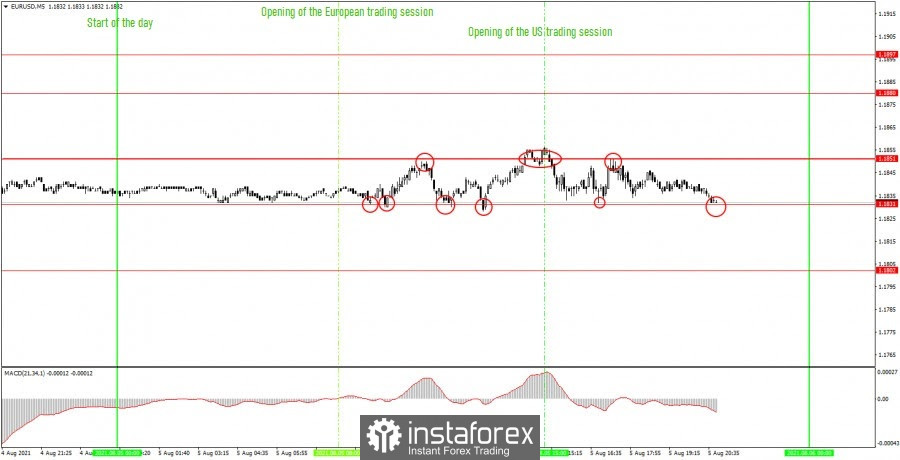 But an even more interesting and paradoxical picture developed on the 5-minute timeframe. There, the pair traded between the levels of 1.1831 and 1.1851 all day, alternately working out them and forming signals around them. As a result, as many as nine trading signals were formed per day, most of which could be worked out, since the signals themselves were very accurate. At the beginning, the price bounced twice from the level of 1.1831, after which it rose to the level of 1.1851, to which it fell only 1 point. Thus, it was necessary to open a long position and close it on a rebound from 1.1851 in a profit of 7-8 points. After a rebound from 1.1851, a short trade should have been opened, and the price almost immediately reached the level of 1.1831 and bounced off it again: another 8 points of profit and a new buy trade. At the beginning of the American session, the level of 1.1851 was worked out again and the price bounced off it again. Therefore, it was necessary to fix the profit on the buy order (again 8-10 points of profit) and sell the pair again. The price subsequently dropped again to the level of 1.1831, once again rose to 1.1851 and once again bounced off it, again dropping to the level of 1.1831. As a result, novice traders could trade between these two levels all day and in total make more profits than the daily volatility of the pair. There are also such paradoxical days.

The EUR/USD pair continues to remain in an upward trend on the 30-minute timeframe. However, this trend is no longer just weak, it is purely formal. In general, the EUR / USD pair retains low volatility and the absence of trend movement, which greatly complicates the process of trading on the older TF. Thus, formally, we can now consider buy signals from the MACD indicator, but this should be done with the utmost care. Unfortunately, this indicator rarely generates the necessary signals. On a 5-minute timeframe, it is recommended to trade from the levels 1.1802, 1.1831, 1.1851, 1.1880, 1.1877. Take Profit, as before, is set at a distance of 30-40 points. Stop Loss - to breakeven when the price passes in the right direction by 15-20 points. At 5M TF, the target can be the nearest level if it is not too close or too far away. If located - then you should act according to the situation. On Friday, the European Union will not publish a single important report, but the US will release the NonFarm Payrolls report, which is of great importance for the dollar. Also, data on unemployment and wages in the United States will become known. All of this data can cause a strong market reaction.

Interesting? Write a comment below.
 Analytics and trading signals for beginners. How to trade EUR/USD on August 6. Analysis of Thursday. Getting ready for Friday
Forward 
Backward 