Analytics and trading signals for beginners. How to trade EUR/USD on August 9. Analysis of Friday. Getting ready for Monday 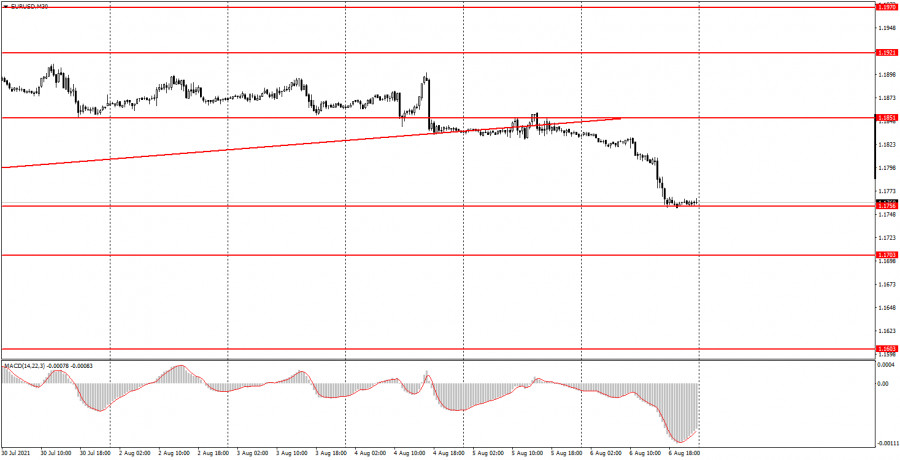 The EUR/USD pair continued its downward movement on Friday after it settled below the upward trend line. This is exactly the conclusion that should be drawn based on the picture in the chart above. However, in fact, the pair spent more than a week in an almost absolute flat, or at least in a very limited price range. And the breakthrough of the upward trend line was very formal, since there was no upward trend as such. As for the downward movement on Friday, it was triggered exclusively by one macroeconomic event - the NonFarm Payrolls report in the United States. Thus, it is definitely impossible to say that the downward movement continued because the price crossed the trend line. However, one way or another, the price dropped 85 points on Friday, but it was still impossible to work out this movement on the 30-minute timeframe. The MACD indicator still rarely generates signals that should be worked out, and trends and trend lines look very arbitrary. Therefore, the picture is unfavorable for trading. As for the NonFarm Payrolls report, it turned out to be slightly better than the forecasts, which were very high. Therefore, the fact that the US dollar rose in price as a result should not surprise anyone. 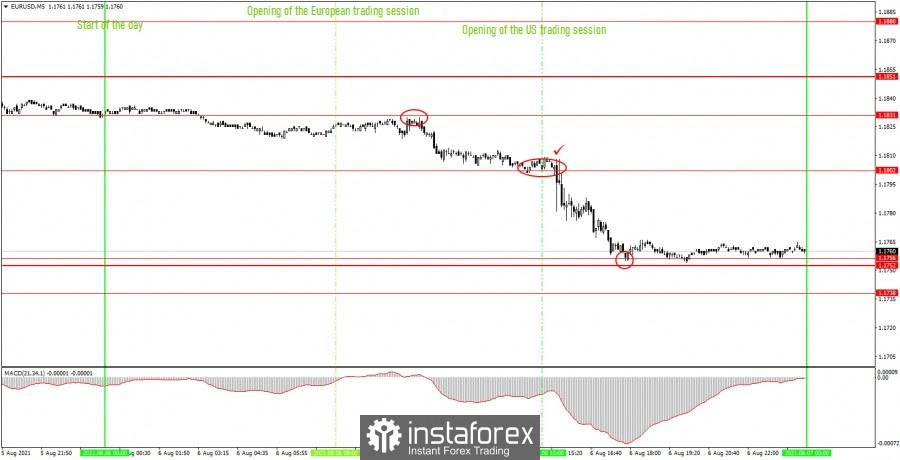 Meanwhile, on the 5-minute timeframe, we see an almost ideal picture for trading. Three trading signals were generated during the day, ideal in terms of accuracy. However, it would be more correct to say that the price perfectly dropped from the level of 1.1831 to 1.1756. The first trading signal was formed in the middle of the European trading session and it was a rebound from the level of 1.1831. In fact, the price fell short of reaching one point to the level of 1.1831, but this is a small margin of error. Already 10 points below this level, it was clear that there was a rebound, just not perfect in terms of accuracy. Thus, short positions should have been opened here. Further, the price reached the level of 1.1802, around which novice traders could do several options. First, they could have closed short positions at about 20 points profit ahead of the release of important US statistics. Secondly, they could set a Stop Loss for a short position at breakeven and stay in the market. In the first case, the deal would have been closed and there was no need to enter the market on that day, since the corresponding signals were no longer generated. In the second case, the decline in quotes continued, as the US dollar received support from the NonFarm Payrolls report, and subsequently reached the level of 1.1756, where it was necessary to close a short position with a total profit of about 60 points. In any case, novice traders made a good profit that day.

The EUR/USD pair formally started a new downward trend on the 30-minute timeframe, breaking the upward trend line. However, as we said above, the downward movement was purely macroeconomic, and the trend line was very conditional and formal. Thus, we still recommend paying more attention to the lower TF and waiting for a normal trend to form on the 30-minute TF. On the 5-minute timeframe, it is recommended to trade from the levels 1.1689, 1.1738, 1.1752 (1.1756), 1.1802, 1.1831. Take Profit, as before, is set at a distance of 30-40 points. Stop Loss - to breakeven when the price passes in the right direction by 15-20 points. At the 5M TF, the target can be the nearest level if it is not too close or too far away. If located - then you should act according to the situation. No important publications or events are scheduled for Monday in the European Union and the United States. Thus, beginners will have to rely solely on technical signals on this day.

Interesting? Write a comment below.
 Analytics and trading signals for beginners. How to trade EUR/USD on August 9. Analysis of Friday. Getting ready for Monday
Forward 
Backward 