Analytics and trading signals for beginners. How to trade EUR/USD on August 10. Analysis of Monday. Getting ready for Tuesday 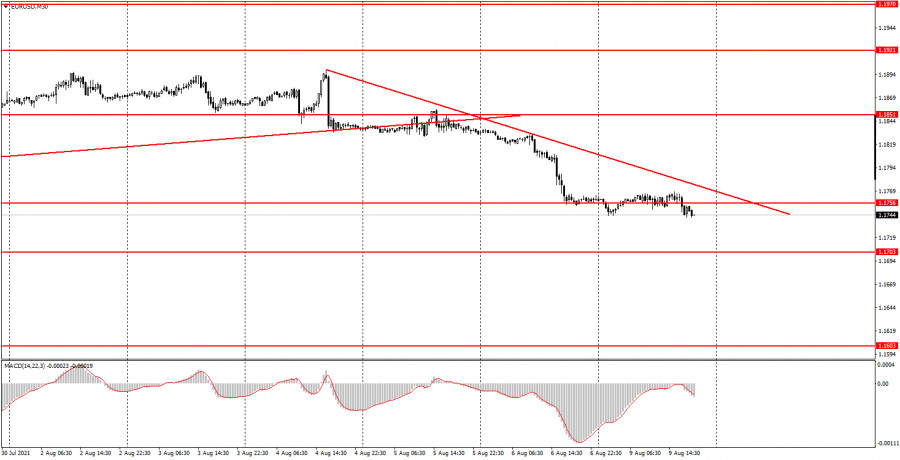 The EUR/USD pair was in the weakest movement all day and showed absolutely nothing interesting on Monday. On the 30-minute timeframe, you can clearly see that the price has been around the 1.1756 level all day. Also, a descending trend line was formed today, as in the last four days the price inevitably decreased. Though not much. Thus, a downward trend has formed at the 30-minute TF, so at this time novice traders can consider sell signals from the MACD indicator. It should also be noted that not a single important report was published in the European Union or America during Monday. Friday's data on the number of new jobs outside the agricultural sector and unemployment were fully worked out by traders on Friday and on Monday no strong downward movement was observed. However, it should be noted that the pair did not grow either. Thus, Nonfarm Payrolls allowed the pair to start a downward trend in the short term, but how long will it last? 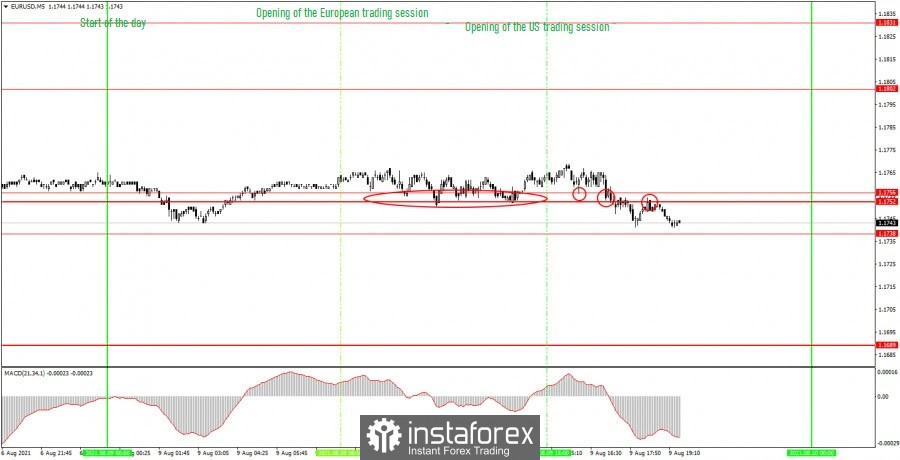 Meanwhile, on the 5-minute timeframe, we can see exactly what the move on Monday is. The pair spent most of the day in a horizontal channel with a width of 20 points. The total volatility of the day does not exceed 30 points. Thus, today it is not that it was difficult to make a profit, but even just opening positions was already a feat. In principle, novice traders should not have opened any trade deals today. In the chart above, you can clearly see that the price dropped five or six times to the levels of 1.1752 and 1.1756, bouncing off them, but each time it retreated a maximum of 7-8 points. Thus, even if beginners fell for this trick and opened long positions, after the third or fourth rebound, it became clear that the pair was in absolute flat. Therefore, a long position should have been closed at breakeven or minimal loss. Further, according to the signals from the levels 1.1752 and 1.1756, it was not necessary to open positions, since at that moment at least three false signals had already been formed. Therefore, if beginners got a loss on Monday, then it is minimal. And the nature of the pair's movement was absolutely not conducive to trading. With such movements, it was simply impossible to make a profit.

The EUR/USD pair continues a very weak downward movement on the 30-minute timeframe. By and large, most of the last downward movement took place last Friday, when strong statistics came out in the US, supporting the dollar. Nevertheless, as long as the trend line remains relevant, novice traders can pay attention to the signals from the MACD indicator, which are formed near the zero level. Also, a rebound from a trend line can act as a sell signal, and a buy signal can be overcome. On the 5-minute timeframe, it is recommended to trade from the levels 1.1689, 1.1738, 1.1752 (1.1756), 1.1802, 1.1831. Take Profit, as before, is set at a distance of 30-40 points. Stop Loss - to breakeven when the price passes in the right direction by 15-20 points. At the 5M TF, the target can be the nearest level if it is not too close or too far away. If located - then you should act according to the situation. No important reports or events scheduled in the European Union and the United States on Tuesday. Thus, beginners will have to rely solely on technical signals on this day.

Interesting? Write a comment below.
 Analytics and trading signals for beginners. How to trade EUR/USD on August 10. Analysis of Monday. Getting ready for Tuesday
Forward 
Backward 