AUD/USD rallies and it could approach and reach new highs as the Dollar Index goes down. The currency pair has decreased a little to retest a broken obstacle. Now it is almost to make a new higher high which could confirm a further growth.

It's located at 0.7322 at the time of writing, the next upside target is seen around the 0.7350 level. The Australian Current Account was reported at 20.5B below 21.5B expected, increasing from 18.9B, while the Building Approvals dropped by 8.6% versus a 5.0% drop expected. In addition, the Private Sector Credit increased by 0.7%, beating the 0.5% estimate.

AUD/USD has increased only because the DXY drops right now. The Chinese Manufacturing PMI was reported at 50.1 below 50.2 expected and versus 50.4 in the previous reporting period signaling a slowdown in expansion, while the Non-Manufacturing PMI dropped from 53.3 to 47.5 points far below 52.1 forecast indicating contraction. 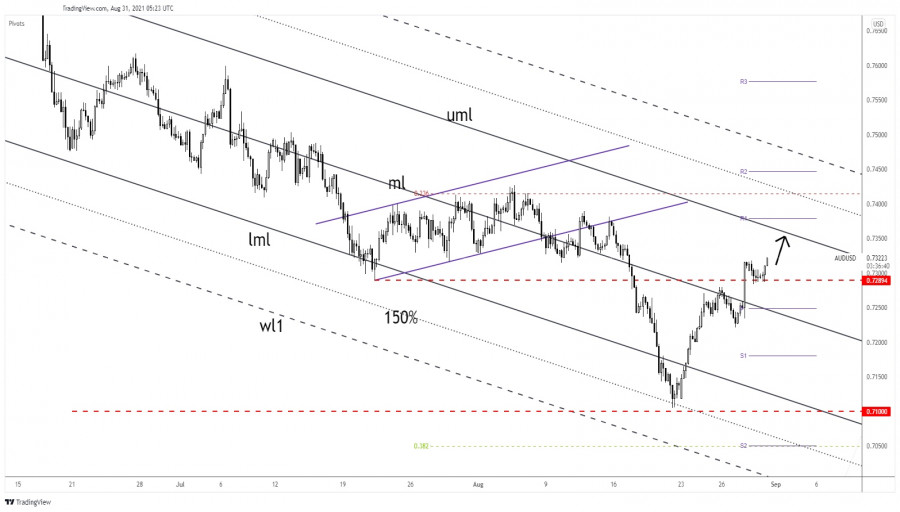 AUD/USD has decreased a little to retest the 0.7289 broken resistance. Now it seems determined to approach and reach the descending pitchfork's upper median line (uml). Technically, the price could take out this dynamic resistance after failing to stabilize under the lower median line (lml).

A minor consolidation above 0.7300 psychological level could bring new long opportunities. Actually, the current breakout through 0.7318 high was seen as a buying opportunity.

The temporary decline to retest 0.7289 followed by the current breakout above 0.7318 former high represented a long opportunity with a first target at the upper median line (uml). The weekly R1 (0.7379) is seen as an upside target as well after AUD/USD's failure to come back to approach and reach the weekly pivot point (0.7249).

AUD/USD is bullish as long as it stays above 0.7284 immediate low. Only a major bearish reversal pattern printed on the upper median line (uml) could signal a bearish movement in the short term.