The AUD/USD pair shows an upward correction. The Australian dollar took advantage of the US dollar's temporary weakness and pulled back from the reached multi-month lows last week. Last Thursday, the instrument updated its 10-month lows, declining to the level of 0.7107. But despite the strong downward impulse, the bears failed to attack the 0.70 mark – the pair rose first and then went to a correction.

The main driver for the decline was the US dollar, which strengthened its positions all over the market during the previous week. The "hawkish" minutes of the Fed's last meeting supported the US dollar, increasing the likelihood of an early collapse of QE. The scales briefly tilted in favor of the implementation of the "hawkish" scenario. The head of the Federal Reserve Bank of Dallas, Robert Kaplan acted as a kind of counterweight: he voiced cautious comments last Friday, the essence of which was that the Fed could take a wait-and-see position, due to the deterioration of the epidemiological situation in the United States. 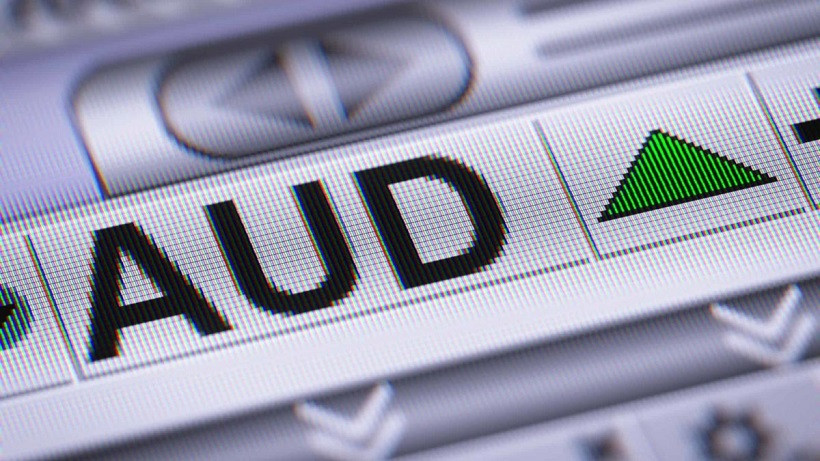 The coronavirus really reminded Americans of itself again – the number of daily cases has been growing for three months. If this indicator fluctuated around 10-14 thousand at the beginning of June, then yesterday, 260 thousand new cases of COVID-19 were registered in the States. And although the country's authorities called the current situation a "pandemic of the unvaccinated" (thereby shifting responsibility for the spread of infection to the citizens themselves), the very fact of the coronavirus crisis may affect the determination of the Fed members. Robert Kaplan only confirmed the validity of such assumptions.

That is why the US dollar has weakened throughout the market. Traders are hesitant to invest it ahead of Jerome Powell's speech, which will take place this Friday, as part of the economic symposium in Jackson Hole. In turn, the Australian dollar took advantage of the situation, especially since the latest data on Australia's labor market, published last week, turned out to be better than expected. The AUD/USD traders were unable to win back this release due to the general hegemony of the US dollar, although all the components of Australian Nonfarm entered the green zone. The July figures reflected a further recovery in the Australian labor market, despite the lockdowns that were introduced in mid-summer in the largest cities in the country.

The unemployment rate declined to 4.6%, although it should have increased to 5% according to preliminary forecasts. This indicator has been showing a downward trend for the ninth month in a row, indicating "healthy trends" in the labor market. The last time unemployment was at this level was in January 2009. In the two years leading up to the pandemic, this indicator fluctuated in the range of 5.0%-5.4%. In other words, unemployment settled in the area of pre-crisis values, and significantly ahead of schedule. In particular, members of the Reserve Bank announced their forecast at the beginning of this year, according to which the unemployment rate this year should have been in the area of 6%. According to them, this indicator should have returned to the pre-crisis range of 5% -5.5% only in 2022. It can be seen that the indicator decreased at a faster pace compared to the initial forecasts. 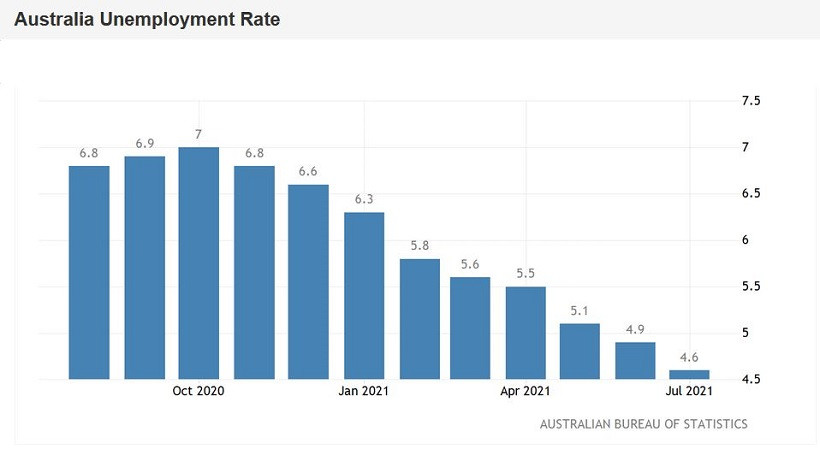 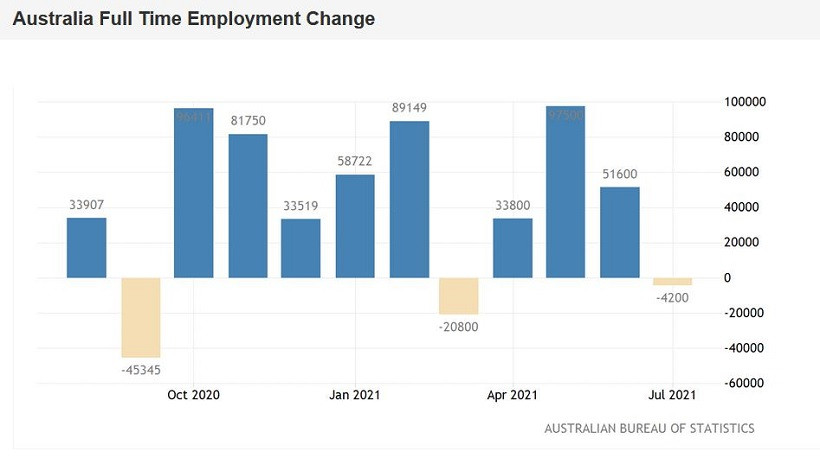 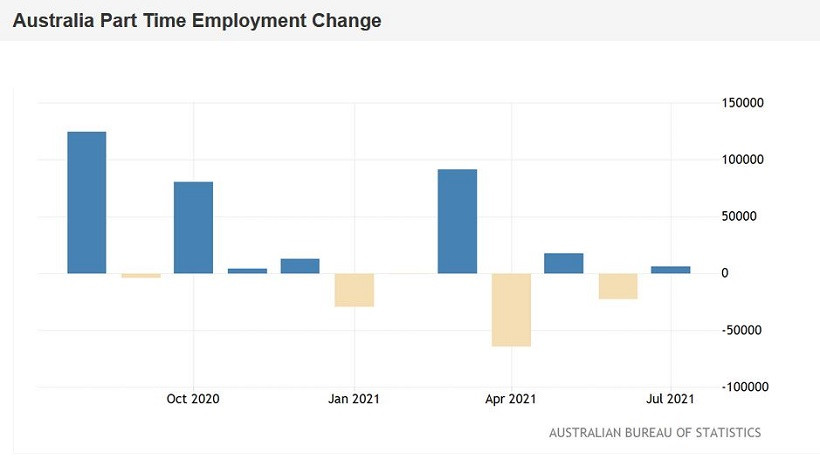 It is also worth noting the positive dynamics in the number of employees in July. The overall indicator also turned out to be better than forecasts, reaching +2.2 thousand, while experts expected a decline in the negative area (-42 thousand). However, the structure of this indicator suggests that the overall growth was due to part-time employment as full employment showed a negative result (the ratio is -4.2/+6.4). At the same time, it is known that full-time positions, as a rule, offer a higher level of salary and a higher level of social security, compared with temporary part-time jobs. Therefore, the current dynamics in this regard are negative. But given the degree of coronavirus restrictions that have been introduced in Australia, the above result is literally a "breakthrough". It can be recalled that almost half of all Australians live in isolation due to the COVID-19 outbreak in the three largest cities of the country — Melbourne, Canberra, and Sydney. The lockdown was even extended for another month until the end of September in Sydney, where more than 5 million people live.

Therefore, the Australian labor market has shown an amazing "stress resistance", despite the large-scale restrictive measures introduced in the country. This fact allows buyers of the AUD/USD pair to develop a large-scale correction, taking advantage of the weakness of the US currency. The nearest resistance level is at 0.7240 - this is the Tenkan-sen line on the D1 timeframe. Once this is broken, we can consider longs to the levels of 0.7270 (the Kijun-sen line) and 0.7300 (the average line of the Bollinger Bands on the same timeframe).