Bitcoin continues to grow, but it is likely to crash down at any moment

Bitcoin has grown by $16,000 over the past few weeks. Such a movement no longer falls under the definition of "ordinary". It is true that the cryptocurrency is quite capable of passing 5-6 thousand dollars in one direction in one day. However, we are now talking about $16,000, which is about 50% of the total drop in the cryptocurrency in April and May of this year. Thus, there must be some reasons for such a strong movement. However, there were simply no fundamental reasons for such a strong growth. Everyone has already forgotten that China repressed all miners from its territory, and banned all companies from providing any services related to cryptocurrencies. The question of how and to what extent the American legislation regarding the sphere of cryptocurrencies will be tightened is also being resolved now. It can be recalled that a new bill is currently being discussed in the US Congress, which will have to give a clear definition of the concept of "broker", as well as determine which participants of the cryptocurrency market fall under the reporting in the Tax Administration and will be required to pay taxes on their transactions. For bitcoin, this news is obviously not positive. Nevertheless, the strong growth of the first cryptocurrency has been observed in the last two weeks. Based on this, we think about whether this is not a reaction of the market to possible actions of the US government in the future.

Simply put, if the new legislation is introduced, it will be much less profitable to buy bitcoin, because almost all participants in the cryptocurrency market will either fall under the sights of the Tax Administration, or they will immediately be forced to pay taxes. Thus, the demand for bitcoin may significantly decrease. Therefore, it should be bought now, while the new legislation has not yet been approved and has not entered into force! This is just a guess. Nevertheless, it is a fairly true assumption. Then an absolutely reasonable question arises: to what level can a cryptocurrency reach in this absolutely unreasonable course? From our point of view, bitcoin has already "exceeded the plan". It can try to work out the level of $47,200, which is 50.0% Fibonacci. But this mark looks just like the maximum possible target for bitcoin at this time. 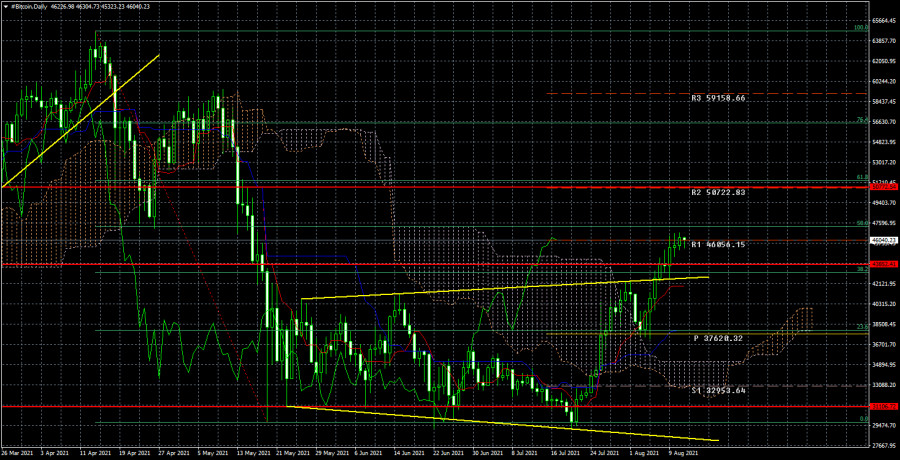 Technically, bitcoin continues to be in an upward movement on the daily timeframe and has worked out the resistance level of $46,056. The next nearest target for an upward movement is the level of $47,200. We believe that from the current positions, "digital gold" can go back to the level of $29,700. However, without appropriate technical signals about the end of the upward trend, it is recommended to avoid selling bitcoin.

Interesting? Write a comment below.
 Bitcoin continues to grow, but it is likely to crash down at any moment
Forward 
Backward 