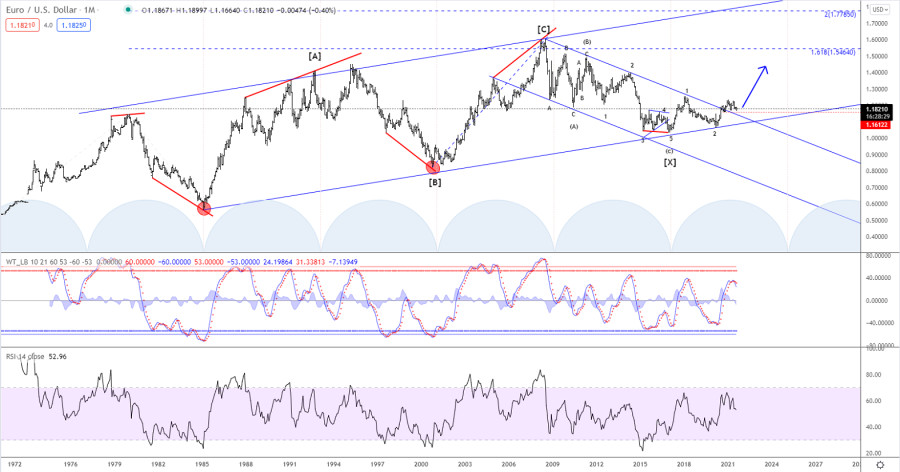 It has been quite a while since we have looked at the long-term picture of EUR/USD, so it's time to do it again. The first thing we can say with certainty is that the long-term trend is up and has been so since 1972. We saw the USD become stronger 2008 to 2017 where EUR/USD bottomed at 1.0340 and since has been moving higher again. Looking at the long-term cycle, we can see a major bottom is reached every 16 years and the last 16 year cycle-bottom was seen in 2017, so expecting EUR/USD to make a new lower low below 1.0340 in the coming years, would not make sense. Rather the most likely scenario is a continuation of more upside progress and ultimately a new higher high above the 2008 high at 1.6038.

Therefore working the way down the time-frames, the analysis should be the best fit to support this scenario for continued upside progress should be the main scenario.

Also the fact, that the downtrend from 2008 was broken in November 2020 indicates more upside pressure and not a return to the downside.

So once the consolidation, we have seen in the past month is complete. Look for renewed upside pressure towards 1.3993 as the next major upside target.

Short-term a break above 1.1751 will indicate that the consolidation of the past months has completed and renewed upside progress should be expected towards the January peak at 1.2359 and the 1.3993 longer-term.