EUR/USD analysis and forecast for August 9, 2021

There is no way that a clear directional movement or trend can be established for the main currency pair of the Forex market. If the EUR/USD pair showed a steady growth the week before last, which allowed us to maintain expectations of its continuation, then at the auction of the last five days, there was an equally strong decline, amounting to 0.92%. Perhaps market participants have already digested (played back) the statement of the Federal Reserve System (FRS). It is still far from the start of the rate hike process and again began to buy the US currency as a protective asset in the conditions of the continuing spread of the COVID-19 delta strain. In general, the summer trading for the euro/dollar and most other major currency pairs is calm. 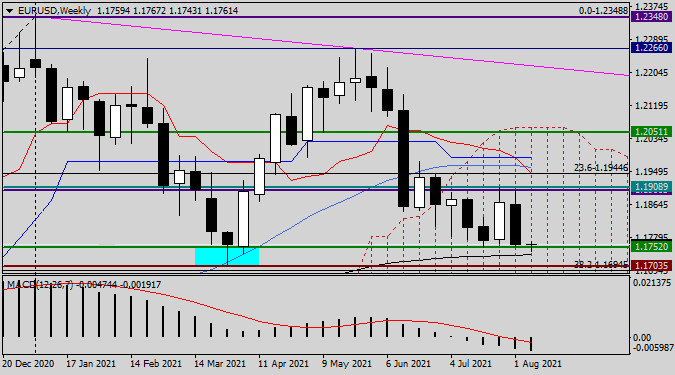 As expected, Friday's report on the US labor market played a decisive role in the weekly trading. I should immediately note that all three main indicators turned out to be very positive and came out much stronger than economists' forecasts. Thus, the number of newly created jobs in the non-agricultural sectors of the American economy was expected at the level of 870 thousand and amounted to 940 thousand. It was assumed that the unemployment rate would fall to 5.7% in July, but in reality, this most important indicator was 5.4%. As for the average hourly wage, it also grew quite impressively by 0.4%, while the consensus forecast increased 0.3%. As a result of such strong labor reports on Friday, the US dollar showed impressive growth, which affected the results of all weekly trading. If we turn to the technical component, the minimum values of the session on August 2-6 were marked at 1.1755, and the highs at the already well-known and strong mark of 1.1900.

Thus, there were no drastic changes in the technical picture of EUR/USD at the end of last week. The strong resistance of sellers in the area of 1.1900 hinders the rise of the quote to higher prices. In turn, equally strong and significant support in 1.1750-1.1700 prevents the price from falling. What can we expect from the main currency pair at the auction of the starting five-day period? Of course, this is an interesting question. If we take the last weekly candle as a basis, the bears will still try to push through the technically strong and extremely important support zone of 1.1750-1.1700. But whether they will succeed or not, the course of the auction will show. The black 89 exponential moving average, which passes at 1.1733, and below, at 1.1694, the level of 38.2 Fibo from the global growth of 1.0636-1.2348, can help the euro bulls. Do not forget about the highlighted March lows, which are near 1.1700. As can be seen on the chart, this mark stopped the decline and sent the pair to 1.2266. And yet, judging by the weekly timeframe, the continuation of the downward movement looks the most likely. However, it is impossible to completely exclude the possibility that the pair will remain in the current range of 1.1900-1.1755. 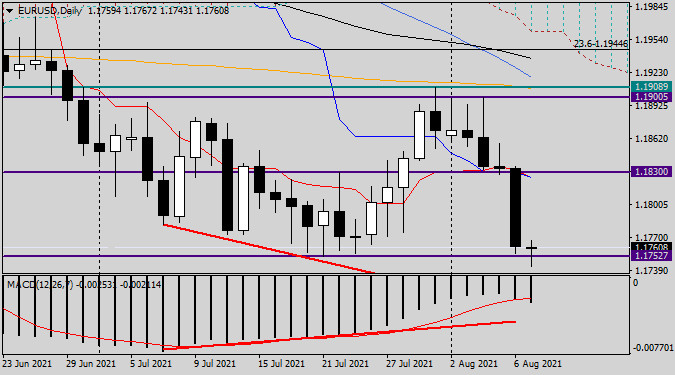 Despite the bullish divergence of the MACD indicator, which seems to have been played back or discharged, the resistance near 1.1900 fully fulfilled its function and did not let the pair go higher. It was after this that the quote moved to a downward trend. We see a strong impact on the strengthening of the US dollar last Friday by very strong data on the labor market. Now, for euro bulls, the priority will be to break the red line of the Tenkan Ichimoku indicator, which provides very serious resistance to growth attempts. However, even this will not radically clarify the situation since a strong resistance zone of sellers passes above 1.1900-1.1910 and the orange 200 exponential moving average. There is no unambiguous opinion regarding trading recommendations. I can offer to try selling if the pair rises to the price zone of 1.1800-1.1830 and bearish candle signals appear at this or smaller time intervals. The same applies to purchases, which will become attractive if candle analysis bullish reversal patterns appear in the support area of 1.1760-1.1700. And finally, in the current situation, I do not recommend setting large goals for any positioning.