To open long positions on EUR/USD, we need the following situation:

Yesterday, in the first half of the day, the single currency failed to grow higher even despite strong data on the Eurozone Services PMI. Retail sales in the eurozone added fuel to the fire as the figure was worse than economists' expectations. Let's look at the 5M chart and figure out what happened. On the chart, it is clearly visible how bulls regained control over the level of 1.1855 (I emphasized it in the morning forecast). If the euro/dollar consolidated at this level, it would be a signal to open long positions, which led to an increase in the pair at the beginning of the UD session by 40 pips. However, the victory of bulls did not last long. The strong Services PMI report pushed down the euro but it was not possible to get clear signals for entering the market. Only by the middle of the US session, after the bears tested the level of 1.1844, a sell signal was formed. However, the pair did not drop significantly although the euro is still weighed on at the time of writing this article. Today, traders are anticipating the Bank of England's monetary policy meeting. Its results may somehow affect the trajectory of the EUR/USD pair. Given that bulls are slowly but surely losing control, the pair is likely to return to the resistance of 1.1844. The moving average runs above this level. It slopes downwards which could be seen as a sign of decline. Only a breakout of this level and its reverse from top to bottom will indicate long positions as the quote may recover to the resistance level of 1.1869. If so, the next target will be the weekly high of 1.1898 where I recommend locking in profits. The number of short positions may decline significantly if the pair reaches the indicated level. If so, the euro is highly likely to regain bullish momentum. It may even hit 1.1937. In case of a further decline in EUR/USD during the European session, it is recommended to refrain from opening long trades. Only a false breakout of the 1.1822 level will lead to a formation of a new entry point for opening long trades in the market. The pair may also show a small upward correction within the day. If it does not happen, it is better to wait for a decline to the low of 1.1799 or open long trades immediately after a rebound from 1.1774, counting on an upward correction of 15-20 pips within the day. 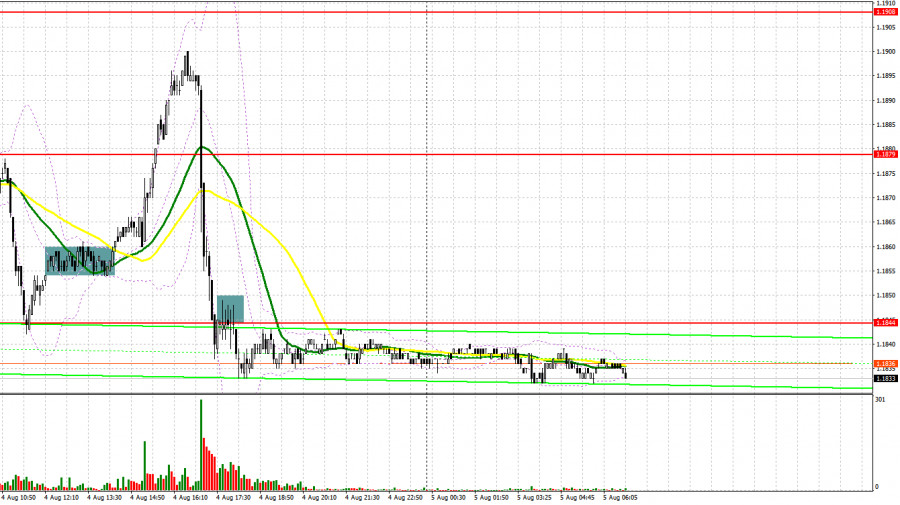 To open short positions on EUR/USD, we need the following situation:

Bears managed to push the pair down to new lows yesterday even though it earlier hit weekly highs. Trading is also conducted below the moving averages, which indicates a slight advantage of the bears. In the first half of the day, the trajectory of the pair will depend on whether it will be able to dip to the resistance level of 1.1844. The formation of a false breakout will be a signal to open short positions as a further downward correction to the support level of 1.1822 may occur. The next target will be a breakout and decline to the low of 1.1799. The next target will be the level of 1.1774 where it is recommended to lock in profits. If EUR/USD continues to grow but does not touch the level of 1.1844, it is better to refrain from opening short positions until the test of the resistance level of 1.1869 takes place. It is also possible to open short positions there only after the formation of a false breakout. It is recommended to sell the pair only from the high of 1.1898, betting on a downward correction of 15-20 pips. 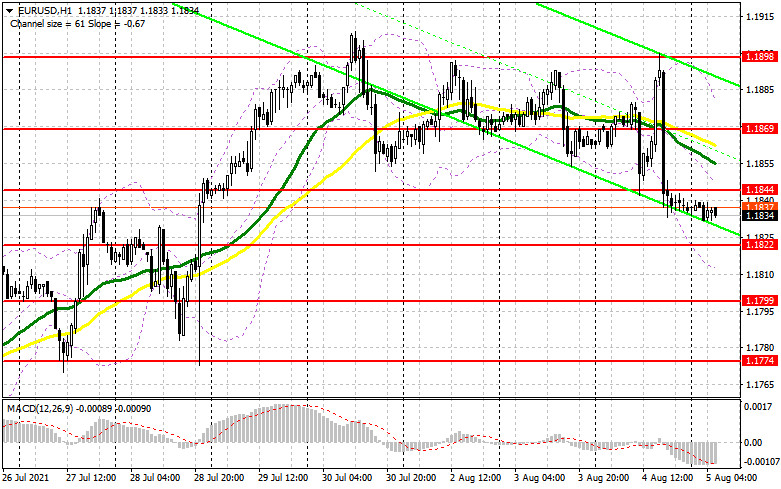 The COT report (Commitment of Traders) for July 27 indicates a decrease in demand for riskier assets. Long positions dropped and short positions increased, which led to another decline in the overall positive net position. The results of the Federal Reserve meeting indirectly affected the trajectory of the euro. Yet, given the wait-and-see approach of the Fed, the greenback weakened significantly. US and EU GDP reports were quite different. In the US, the indicator was lower than the forecasts' value, while in the eurozone, the reading turned out to be better than forecasts. The euro surely took advantage of this data. However, this data is not factored in the current COT report, so it seems that the balance of power tips to bears. The COT report indicates that long non-commercial positions decreased from the level of 208,669 to the level of 202,245, while short non-commercial positions increased from the level of 162,847 to the level of 164,119. Only at the end of this week, fresh macrocosmic reports are due. The US will unveil the Non-Farm Payrolls report, which is sure to impact the EUR/USD pair. If the figure turns out to be positive, the US dollar may climb. Meanwhile, the Federal Reserve thinks that the labor market is recovering slowly. The total non-commercial net position fell from the level of 45,822 to the level of 38,126. However, the weekly closing price rose slightly from the level of 1.1791 to 1.1804. 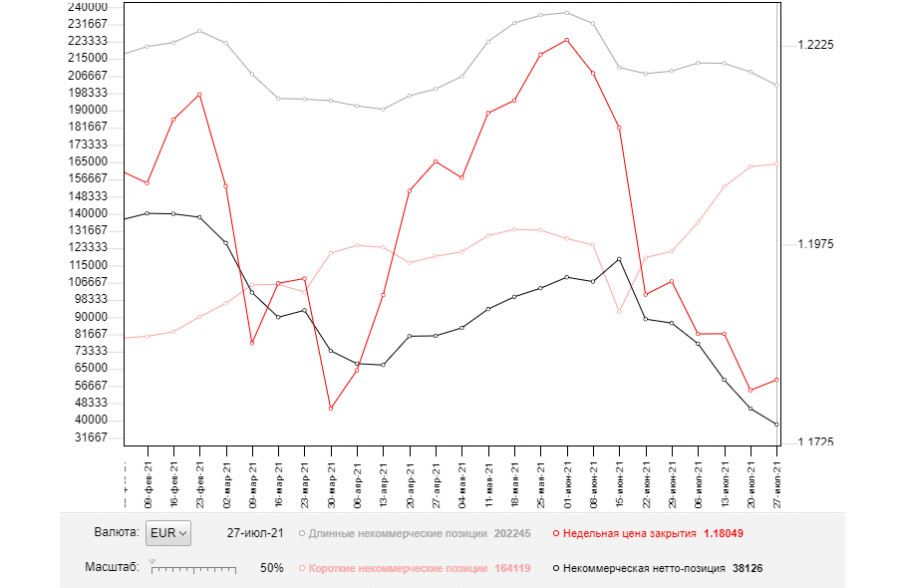 Trading is conducted below the 30 and 50 moving averages, which indicates the strength of the bears.

Note: The period and prices of moving averages viewed by the author on the 1H chart may differ from the general definition of the classic daily moving averages on the daily chart.

In case of growth, the upper border of the indicator in the area of 1.1880 will act as resistance. In case of a decline in the pair, the lower border around 1.1815 will act as support.

Moving average (helps to determine the current trend by filtering out market noise and smooth out fluctuations in price. Period 50. It is marked in yellow on the chart.

Moving average (moving average determines the current trend by smoothing out volatility and noise). Period 30. It is marked in green on the chart.

Non-profit speculative traders include individual traders, hedge funds, and large institutions that use the futures market for speculative purposes and meet certain requirements.