EUR/USD: plan for the European session on August 2. COT reports. Euro needs to regain control of resistance at 1.1882

Last Friday, one could observe a sharp decline in the euro against the background of profit-taking at the end of last month. There was a fall in the pair, even despite quite good indicators in terms of GDP growth and inflation in the eurozone. Confused only by the indicator of economic recovery in Germany, which did not hold out to the expectations of economists and turned out to be much worse than forecasts. In general, the trend towards strengthening the euro will continue and there is no need to seriously pay attention to the observed correction. The lower the euro falls at the beginning of August, the more demand for it will be by the middle of the month. 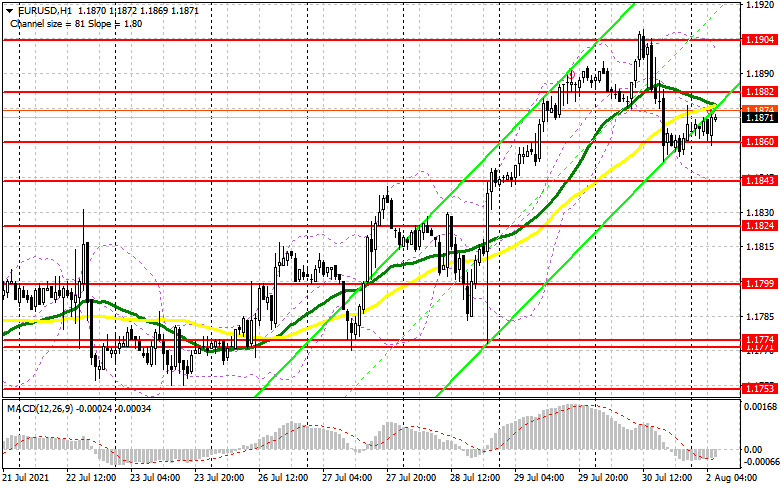 A fairly large number of fundamental reports on the eurozone economy will be released today. Germany will report on retail sales in June, followed by a number of indicators on the index of business activity in the manufacturing sector of the eurozone countries. It is expected that many July indicators will remain un-reconsidered and coincide with the preliminary estimate, which will put pressure on the euro in the morning. Against this background, the bulls focus will shift to the return of the 1.1882 level, which they missed last Friday. Above there are a number of stop orders of big players, therefore, their removal with a reverse test of this area from top to bottom will form a signal to open long positions in continuation of the upward trend, counting on a recovery to the bottom of the 19th figure, which was tested at the end of last week. The next target is 1.1937, where I recommend taking profits. In case EUR/USD falls during the European session and weak data for Germany and the eurozone, I recommend not to rush into long positions. Forming a false breakout in the 1.1860 area will result in creating a new entry point into long positions. If the bulls are not active at this level, I advise you to wait for the update of the larger low at 1.1843, or buy the pair immediately on the rebound from 1.1824, counting on an upward correction of 15-20 points within the day.

The bears managed to cope with the task of protecting the 19th figure and even pushed the euro below the level of 1.1882, just below which the moving averages that play on the bears' side are. As I noted above, the direction in the first half of the day will depend on the data on Germany and the eurozone, and it is likely that the pair will remain under pressure. Against this background, the bears need to think carefully about protecting resistance at 1.1882. Forming a false breakout there and a weaker than expected report on Germany - all this creates a signal to open short positions in hopes of a further downward correction to the support area of 1.1860, which has already been tested in today's Asian session. The next target will be the low of 1.1843, the breakout of which will bring the pair down to the larger support at 1.1824, where I recommend taking profits. If EUR/USD grows during the European session and the bulls are not active at 1.1882, it is best to postpone selling until the test of the larger resistance at 1.1904, but short positions can be opened there only after a false breakout is formed. I recommend selling the pair immediately on a rebound counting on a downward correction of 15-20 points only from a high like 1.1937.

The Commitment of Traders (COT) report for July 20 continued to observe the market bias towards sellers of risky assets. Long positions contracted and short positions rose, which caused overall positive net position to decrease. Last week's European Central Bank meeting dampened sentiment among euro bulls, as it became clear to everyone that the central bank would not rush to tighten monetary policy and would maintain an emergency bond buying program for as long as possible to spur inflationary growth to reach its new target of 2.0%. The situation is the opposite in America. US inflation has long gone beyond the target value, and many representatives of the Federal Reserve point to the need to abandon super-soft stimulus measures in the near future, which plays on the side of the dollar. And no matter how the US central bank tries to convince investors that this is just a temporary phenomenon, the market continues to abandon risky assets in favor of safe-haven assets, which is the US dollar. This week we will receive the FOMC decision on the main interest rate, which could strengthen the position of the US dollar if management seriously considers the issue of cutting the bond purchase program in the fall of this year. But the lower the euro falls, the higher the demand for it will be in the medium term, since the appeal of risky assets is not going anywhere. The COT report indicated that long non-commercial positions fell from 212,851 to 208,669, while short non-commercial positions rose from 153,138 to 162,847 US GDP for the second quarter of this year, where growth is expected at once by 8.4%. It could also provide a powerful bullish momentum for the US dollar. The total non-commercial net position decreased from 59,713 to 45,822. The weekly closing price declined from 1.1862 to 1.1791.

Trading is carried out below 30 and 50 moving averages, which leaves a chance for the bears for a downward correction.

In case of growth, the upper border of the indicator in the area of 1.1900 will act as a resistance. In case the pair falls, support will be provided by the lower border at 1.1843.