EUR/USD: plan for the European session on August 10. COT reports. Euro continues to fall and there are no prerequisites for

Throughout the entire day yesterday, the bears were actively defending the resistance at 1.1764 and this brought results. Let's take a look at the 5-minute chart and talk about what came of it. It is clearly seen how every time the pair approached this level, the bears actively defended it, forming false breakouts and entry points into short positions there. And although the signal was not fully realized during the European session, the emphasis was shifted to the afternoon. A similar unsuccessful attempt to gain a foothold above this range led to another entry point to short positions, after which the pair dropped to the area of the day's lows to support 1.1745 and renewed them. The move down was about 25 points, which is generally not bad for intraday volatility of 35.

Before talking about further prospects for the EUR/USD movement, let's see what happened in the futures market and how the Commitment of Traders (COT) positions have changed. There are no obvious changes in the balance of power in the COT report for August 3. The absence of important fundamental statistics on the eurozone last week and the summer pause forced traders to take a wait-and-see attitude. The focus was shifted to the US labor market data, which was published late last week, but this COT report does not include its results, so it seems that everything has remained unchanged. In fact, the market movement is acquiring a bearish character again, as the data on the number of employees in the non-agricultural sector of the United States turned out to be much better than the forecasts of economists, which allows counting on an earlier curtailment of the asset purchase program by the Federal Reserve. Representatives of the committee have already started talking about this at the beginning of this week, whose speeches will continue throughout the week. The COT report indicated that long non-commercial positions fell from 202,245 to 199,067, while short non-commercial positions fell from 164,119 to 161,060. We will only receive important fundamental statistics on US inflation by the end of the week, which may seriously affect the direction of the EUR/USD pair, but on condition that the data diverge from the forecasts of economists. Many expect inflation to slow down. If this happens, the euro will regain its position. If the data indicate continued rapid growth in CPI, the US dollar continued to strengthen its positions against the European currency. At the end of the week, the total non-commercial net position decreased from 38,126 to 38,007. The weekly closing price increased from 1.1804 to 1.1874. 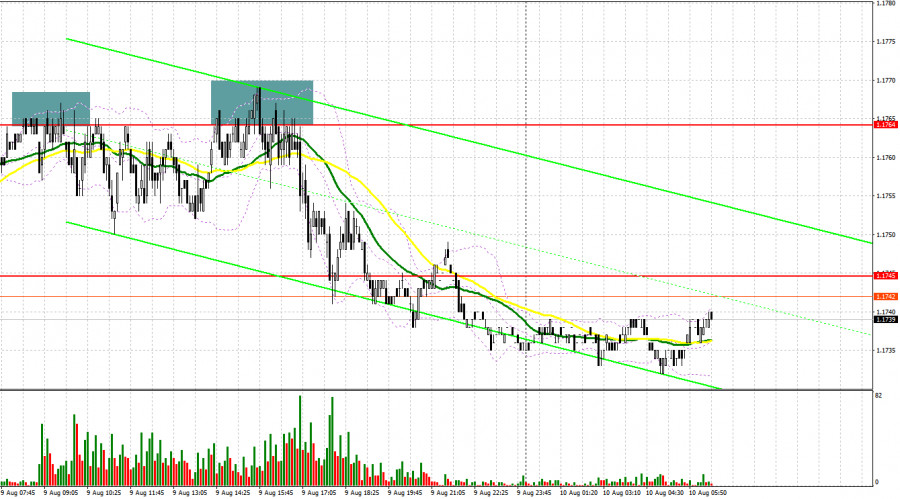 The ZEW Institute report is set to be released this morning. Economists believe that the eurozone business sentiment index could sharply decline in July after the June highs, which will negatively affect the euro's direction, which is ready to continue its bearish trend against the US dollar. If the indicator surpasses the forecasts of economists, which will be evidence of balanced sentiment in Germany and the EU, then the bulls will most likely be able to find the strength to test the resistance of 1.1747. Only a consolidation at this level with a reverse test from top to bottom can generate a signal to open long positions in hopes of a recovery in the euro and a slowdown in the bear market. The closest target will be the area of 1.1767, where the moving averages, limiting the upward potential of the pair, will be. A breakthrough of this area with a similar consolidation can create an additional entry point for long positions, which will lead EUR/USD to new local levels: 1.1787 and 1.1808, where I recommend taking profits. It is best not to rush in case we receive weak data on the eurozone and a negative market reaction with long positions. Long positions can be opened if a false breakout is formed in the area of the new weekly support at 1.1727. I advise you to buy EUR/USD immediately on a rebound only after the first test of the low at 1.1707, or even lower - from the level of 1.1682, counting on an upward rebound of 15-20 points within the day.

So far, the bears control the market quite well. Even if the downward movements do not turn out as rapid as we would like, but the main thing is that the pair renews the lows, which is very good for maintaining the trend. Taking into account the low volatility of the market, we can expect the euro to continue to fall in the first half of the day. The optimal scenario for selling will be the formation of a false breakout in the resistance area at 1.1747, which is now closely approached by the bulls. Failure to settle above this range (by analogy with selling, which I analyzed above), will lead to an excellent entry point into short positions that aims to pull down the pair to the new support at 1.1727. A breakthrough and a test of this area from the bottom up will return the pressure to the pair and open the way to the lows: 1.1707 and 1.1682, where I recommend taking profits. If the bears are not active around 1.1747 and we receive strong data on the eurozone this morning, I advise you to open short positions only after a false breakout is formed around the high of 1.1767. Selling EUR/USD immediately on a rebound is best only after the test of the new local resistance at 1.1787, or even higher - around 1.1808, counting on a downward correction of 15-20 points. 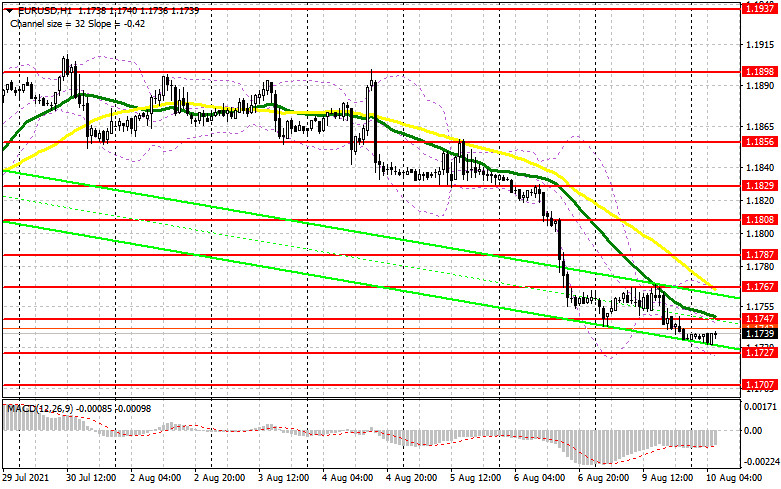 Trading is carried out below 30 and 50 moving averages, which indicates a further decline in the euro.

Interesting? Write a comment below.
 EUR/USD: plan for the European session on August 10. COT reports. Euro continues to fall and there are no prerequisites for
Forward 
Backward 