Several signals to enter the market were formed yesterday. Let's take a look at the 5-minute chart and break down the trades. In the first half of the day, as expected, the data on inflation in the eurozone did not exceed the forecasts of economists, which did not allow the bulls to get out of the resistance at 1.1728. The formation of a false breakout at this level resulted in creating a good entry point to short positions in continuation of the bearish scenario. As a result, the bears achieved the 1.1699 support update, which brought about 30 points of profit. In the afternoon, everyone was focused on the Federal Reserve minutes since the July meeting. As a result, right before its publication, a false breakout and a signal to open long positions were formed. The euro sharply moved to the level of 1.1745 immediately after the release of the data, it was about 40 points, but then it was quickly won back. As a result, in today's Asian session, the bulls lost all their advantage and the pressure on the euro returned. Yesterday's Fed minutes said that central bank officials generally concluded that they had met their inflation target but still needed to meet their labor market targets. The opinions of the committee members on the topic of when and to what extent to cut the bond purchase program were very divided, but they all firmly believe that this should be done by the end of this year, or at most - at the beginning of next.

Important fundamental reports for the euro area will not be published this morning, and the data on the current account balance of the ECB's balance of payments is unlikely to seriously affect the euro and support it. Therefore, it is possible that the bearish trend will strengthen. The initial challenge for the bulls is to regain control of the 1.1686 resistance, which they missed this morning. Only a test of this level from top to bottom will generate a signal to buy the euro with the aim of retracing to 1.1715, where the moving averages that play on the bears' side pass. A breakthrough of this area, along with strong data on the eurozone, can provoke a larger upward correction of the pair to the resistance area of 1.1741, where I recommend taking profits. The bulls' next task is to update 1.1769, which will be a clear signal for forming a new bullish trend. In case EUR/USD falls further in the first half of the day, a serious challenge for the bulls is to protect the support of 1.1656. You can open long positions only when a false breakout is formed there. In case EUR/USD falls during the European session and the bulls are not active around 1.1656, I advise you to wait for the update at 1.1628 (low), or buy EUR/USD immediately on a rebound from the support of 1.1604, counting on an upward correction of 15-20 points within the day.

The bears took control of the market again after failing to push the euro yesterday during the publication of the Fed's minutes. Now they aim to reach the next monthly lows and they can't be stopped. There are no strong fundamental statistics on the eurozone, and buyers of risky assets will not be able to count on bad data on the US labor market, which continues to recover at a good pace. The initial task of the bears is to break through and test the level of 1.1656 from the bottom up, which will increase the pressure on the pair and form a signal to sell the euro in anticipation of renewing new lows: 1.1628 and 1.1604, where I recommend taking profits. The next target will be the area of 1.1541. In the event of an upward correction during the European session, only the formation of a false breakout at the level of 1.1686 can create the first signal to open short positions in hopes of a return of the bear market. In case EUR/USD grows and the bulls are not active at 1.1686, it is best to postpone selling until the test of the larger resistance at 1.1715. You can also open short positions there only after the formation of a false breakout. I advise to sell the pair immediately on a rebound counting on a downward correction of 15-20 points only from a high like 1.1741. 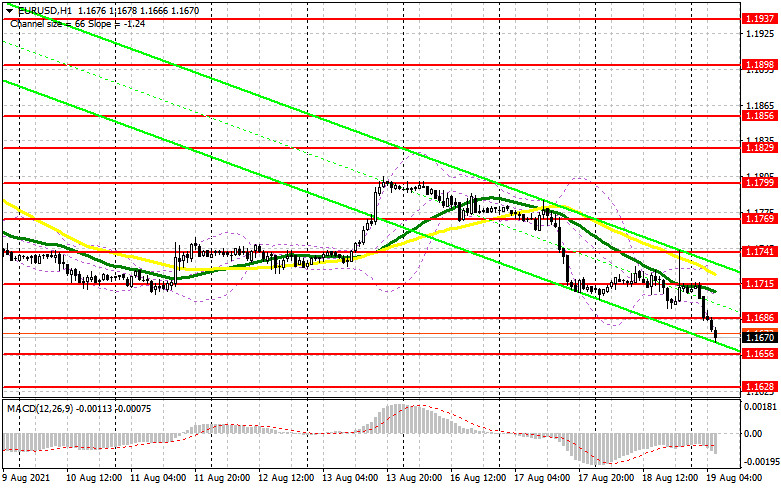 Trading is carried out below the 30 and 50 moving averages, which indicates a continuation of the bear market.

If the pair grows, the upper border of the indicator in the area of 1.1735 will act as a resistance.