Yesterday was spent in a bitter struggle for where the movement will develop further. And even though it's too early to say that the bulls on the euro won, the fact that we didn't see another bull sell-off after the Asian session's fall speaks for itself. In my morning forecast, I paid attention to the 1.1686 level and recommended making decisions from it. Let's take a look at the 5-minute chart and break down the entry points. The breakthrough of 1.1686 in the first half of the day occurred without a reverse test of this level, so no entry point for selling was formed. Then the bulls were able to quickly rehabilitate and had brought back 1.1686 under their control. A reverse test of this area after that resulted in forming a signal to open long positions. As a result, the upward movement was about 20 points and that was the end of it. A similar signal was formed in the second half of the day, but there was no particularly rapid upward growth of the euro. From a technical point of view, the nearest support and resistance levels have changed only a bit, but the overall picture remains the same.

The report on the German producer price index will be released this morning, where a slight slowdown in growth is expected in July compared to June. If the data coincides with the forecasts of economists, this will not affect the EURUSD pair in any way. The bulls' initial task is to regain control of the resistance at 1.1702, which was formed at the end of yesterday. Only a test of this level from top to bottom will generate a signal to buy the euro with the aim of recovering to 1.1740, where I recommend taking profits. It will be extremely difficult to talk about a breakthrough of this range, since we also do not expect important fundamental reports during the US session. Only the breakthrough of 1.1740 and the reverse test will provoke a larger upward correction of the pair already to the 1.1769 area. The next target will be the resistance at 1.1799, the renewal of which will be a clear signal for forming a new bullish trend. In case EUR/USD falls in the first half of the day, a serious challenge for the bulls is to protect the support at 1.1669. You can open long positions only when a false breakout is formed there. In case EUR/USD falls during the European session and the bulls are not active in this range, I advise you to wait until the 1.1628 low has been updated, or to buy EUR/USD immediately on the rebound from the support of 1.1604, counting on an upward correction of 15-20 points within the day. 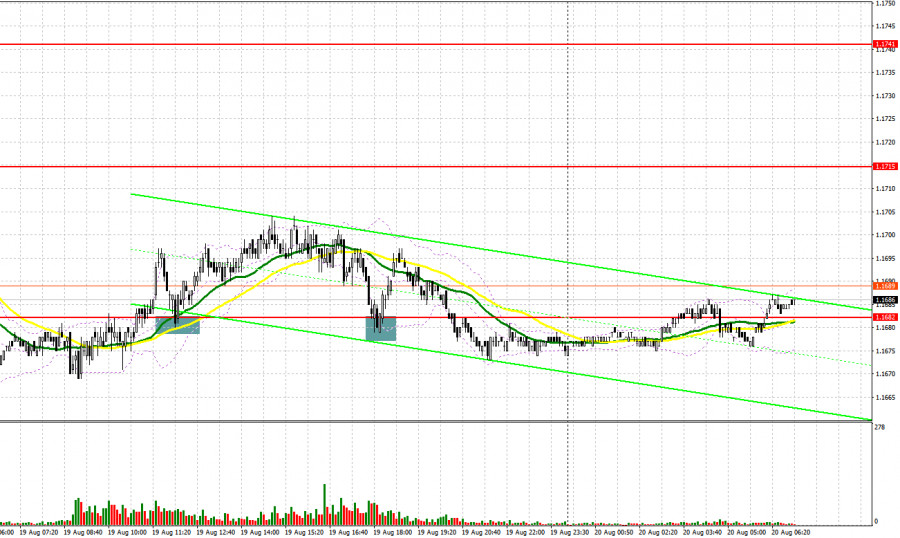 The bears, although they keep the market under their control, run the risk of running into trouble if they do not become active again. There are no strong fundamental statistics for the eurozone, and one can hardly count on bad data on the German producer price index. The initial task of the bears is to break and reverse test the level of 1.1669 from the bottom up, which will increase the pressure on the pair and form a signal to sell the euro in anticipation of renewing new lows: 1.1628 and 1.1604, where I recommend taking profits. The next target will be the area of 1.1541. In the event of an upward correction during the European session, only the formation of a false breakout at the level of 1.1702 forms the first signal to open short positions in hopes of a continuation of the bear market. In case EUR/USD grows and the bulls are not active at 1.1702, it is best to postpone selling until the test of the larger resistance at 1.1740. You can also open short positions there only after a false breakout has formed. I recommend selling the pair immediately on a rebound counting on a downward correction of 15-20 points only from a high like 1.1769. 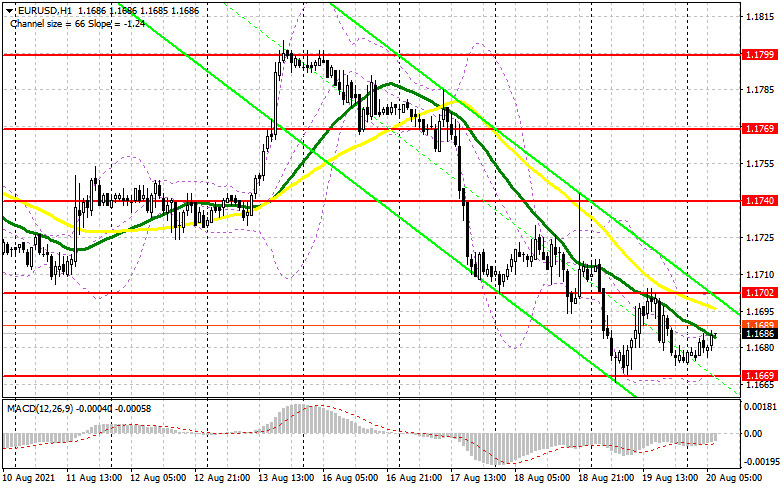 Trading is carried out below the 30 and 50 moving averages, which indicates a continuation of the bear market.

Surpassing the upper border of the indicator in the area of 1.1702 will lead to a new wave of euro growth. A breakthrough of the lower boundary at 1.1669 will increase the pressure on the pair.