EUR/USD: plan for the European session on August 23. COT reports. An upward correction in the euro and a test of the strength

Last Friday there was a signal to open long positions in the expectation of an upward correction, which the market had been lacking for so long. Let's take a look at the 5-minute chart and talk about what happened. It is clearly seen how a false breakout in the 1.1669 area resulted in creating a signal to open long positions in the pair. After that, there was an increase in the area of resistance at 1.1702, where I recommended taking profits. As a result, the upward movement left about 30 points - almost all the intraday volatility of the pair.

Today there are a number of reports on activity in the manufacturing and service sectors of the eurozone countries. It is unlikely that the indicators will seriously diverge from the preliminary values, but it is necessary to pay attention to the reports - it could indicate the state of the economy in which the next autumn of the coronavirus pandemic will come. In today's Asian session, the bulls have already emerged, having achieved a breakthrough of the resistance at 1.1699. Their initial task is to protect this level. Only the formation of a false breakout there can create a good signal to open long positions in continuation of the pair's upward correction. A more important task is a breakthrough and reverse test from top to bottom of the level of 1.1740, which also creates a signal to buy the euro with the aim of recovering to 1.1769, where I recommend taking profits. The next target will be the area of 1.1799. In case EUR/USD falls in the first half of the day and it is active in the 1.1699 area, I advise you to postpone long positions and wait for the renewal of the low at 1.1666, which also acts as the lower border of the current horizontal channel. It is possible to buy EUR/USD immediately on a rebound from the support of 1.1628, counting on an upward correction of 15-20 points within the day. 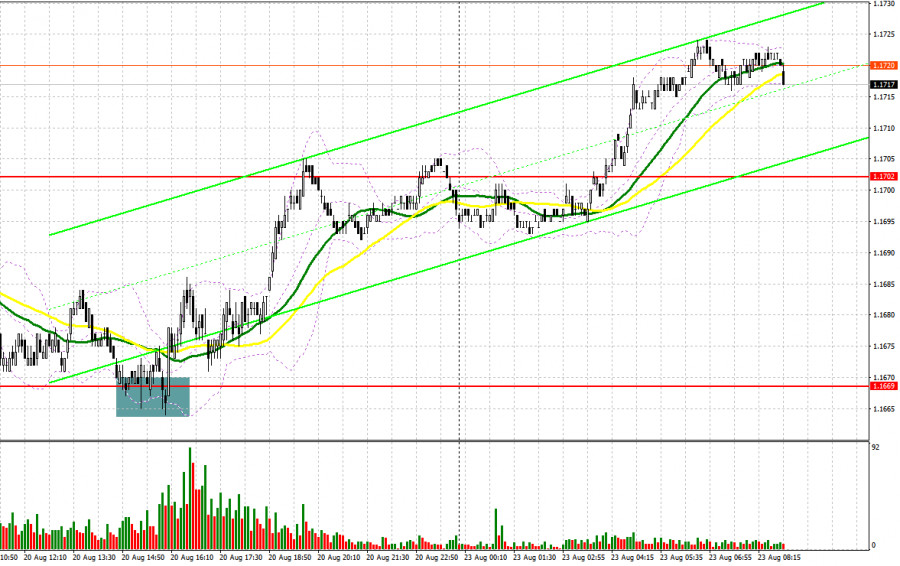 The bears, although they keep the market under their control, run the risk of running into trouble. Good data for the euro area could lead to a sharper rise in the euro. The initial task of the bears is to regain control of 1.1699. Only a breakthrough and reverse test of this range will return the pressure to the pair and generate a signal to sell the euro, counting on the renewal of last week's low of 1.1666. The next target will be the area of 1.1628, but one can hardly count on such a powerful downward movement today. In case of further upward correction during the European session, only the formation of a false breakout at the level of 1.1740 can create the first signal to open short positions in hopes of restoring the bear market. In case EUR/USD grows and the bears are not active at 1.1740, it is best to postpone selling until the test of the larger resistance at 1.1769. I advise to sell the pair immediately on a rebound counting on a downward correction of 15-20 points only from a high like 1.1799. 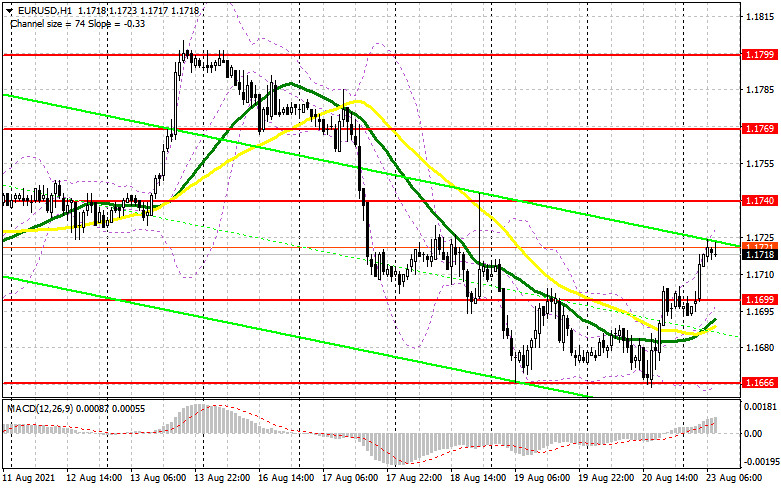 Trading is carried out above 30 and 50 moving averages, which indicates the formation of an upward correction in the pair.

In case the euro falls, support will be provided by the lower border at 1.1666.

Interesting? Write a comment below.
 EUR/USD: plan for the European session on August 23. COT reports. An upward correction in the euro and a test of the strength
Forward 
Backward 