EUR/USD: plan for the European session on August 24. COT reports. Demand for the euro is returning. Bulls aim to surpass

Yesterday in the first half of the day, no signals to enter the market were formed due to versatile fundamental reports on activity in the manufacturing sector and in the service sector of the eurozone countries. If you look at the 5-minute chart, you will see that the pair did not reach any of the levels I indicated in the morning. In this regard, no signals were formed to enter the market. The euro was still in demand during the US session, but the bears defended the resistance at 1.1740 for the first time, which resulted in forming a false breakout and a rebound, down by 15 points. However, the bullish direction was not seriously damaged, which by the end of the day led to a breakthrough of 1.1740 and a further upward correction in EUR/USD.

Before talking about the further prospects for the EUR/USD movement, let's see what happened in the futures market and how the Commitment of Traders positions have changed. The Commitment of Traders (COT) report for August 17 showed that there is a clear increase in traders' interest in the market, since long positions have sharply grown, but short positions have remained practically unchanged, which may indicate that buyers of risky assets are feeling the low. Eurozone GDP and inflation data released last week were in full agreement with economists' forecasts, which is generally not bad, as everything is going according to the expectations and plans of the European Central Bank. The situation towards the bulls changed when the Federal Reserve's minutes was published, where the members of the committee members' views on the future policy were divided - this supported risky assets and caused the pair's downward trend to come to a stop. The lack of benchmarks due to the new strain of the Delta coronavirus and the incomprehensible reaction of the European economy to it in the fall - all this forces the ECB to continue to adhere to a wait-and-see attitude and maintain a stimulating policy at current levels, which limits the pair's upward potential. The COT report indicated that long non-commercial positions rose from 212,809 to 233,529, while short non-commercial positions fell from 178,952 to 175,889. By the end of the week, the total non-commercial net position increased from 33,857 to 57 640. The weekly closing price also rose from 1.1736 and 1.1777.

Today we are expecting a report on German GDP for the second quarter of this year, as well as speeches by representatives of the ECB, who will certainly talk about the prospects for the economy and its support program. Most likely, this will have a more negative effect on the short-term direction of the pair than support it. The reason is the absence of strong inflationary pressures in the eurozone this summer. Despite this, the key target of the bulls for the first half of the day is the breakdown of the level of 1.1750. A breakthrough of this area with a reverse test from top to bottom generates a signal to open long positions with the expectation of a further recovery in the euro and a continuation of the upward trend that we saw at the end of last week. The closest target will be the area of 1.1774. Its breakthrough with a similar consolidation creates an additional entry point for long positions, which will lead EUR/USD to new local levels: 1.1799 and 1.1829, where I recommend taking profits. With the factor of weak data on Germany and a negative market reaction to the speech of ECB representatives, then it is best not to rush with long positions. You can open longs subject to the formation of a false breakout in the 1.1725 area, where the moving averages, playing on the side of the bulls, pass. I advise you to buy EUR/USD immediately on a rebound only after the first test of the low at 1.1696, or even lower - from the level of 1.1666, counting on an upward rebound of 15-20 points within the day. 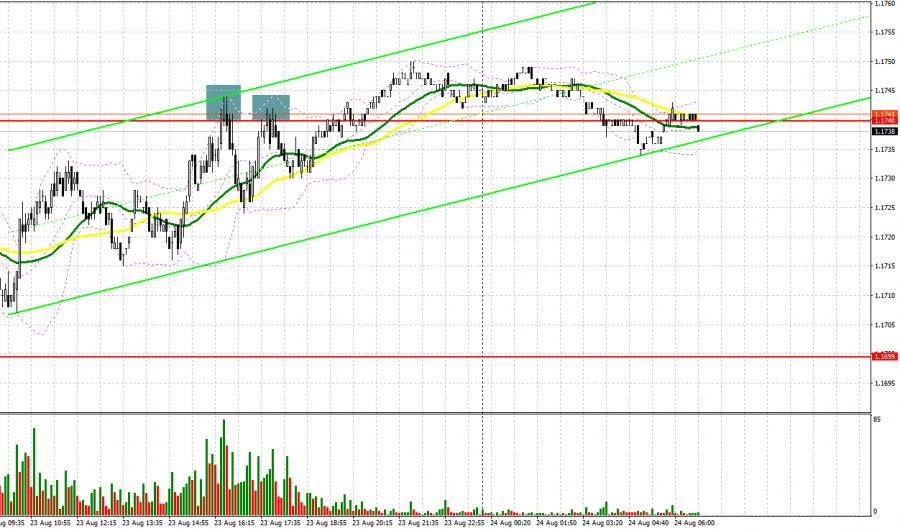 The bears have not shown much initiative yet, as clear evidence of the end of the bearish trend is forcing them to take a wait-and-see attitude, which is confirmed by the COT report that I mentioned above. Only weak data on German GDP can somehow ruin the life of bulls in the first half of the day. Forming a false breakout in the resistance area at 1.1750 will provide an excellent entry point into short positions with the aim of moving to 1.1725. Only a breakthrough and a test of this area from the bottom up will increase the pressure on the pair and open the way to the lows: 1.1696 and 1.1666, where I recommend taking profits. If the bears are not active in the 1.1750 area and we receive strong data for Germany in the morning, I advise you to open short positions only after a false breakout is formed in the 1.1774 area. Selling EUR/USD immediately on a rebound is best only after the test of the new local resistance at 1.1799, or even higher - around 1.1829 counting on a downward correction of 15-20 points. 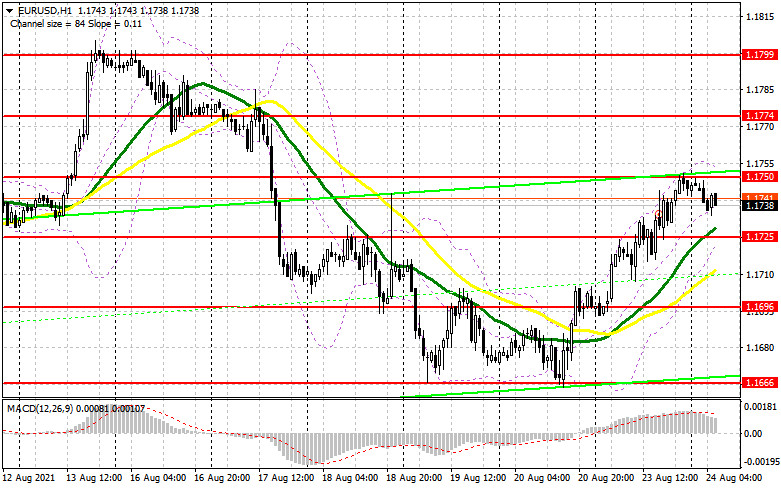 Trading is carried out above 30 and 50 moving averages, which indicates continued growth in the euro in the short term.

A breakthrough of the upper border of the indicator in the area of 1.1760 will lead to a new wave of growth for the pair. Surpassing the lower border around 1.1725 will increase the pressure on the euro.

Interesting? Write a comment below.
 EUR/USD: plan for the European session on August 24. COT reports. Demand for the euro is returning. Bulls aim to surpass
Forward 
Backward 