EUR/USD: plan for the European session on August 25. COT reports. Upward trend in the euro continues, albeit with great difficulty

Yesterday, there was only one signal to sell the euro and it was formed in the afternoon. Let's take a look at the 5 minute chart and talk about what happened. The data on the volume of GDP in Germany only slightly exceeded the forecasts of economists, which did not particularly help the euro in rising against the US dollar during the European session. In this regard, there were no signals for entering the market in the first half of the day. An unsuccessful attempt to break out of the resistance at 1.1750 resulted in forming a false breakout and a signal to sell the euro. However, a major downward movement did not take place, and after falling by about 15 points, the pair returned to the 1.1750 area, where it ended the trading day.

Today we will receive quite interesting data on the indicator of the conditions of the German business environment from IFO. The indicators may push the pair to return to weekly highs. Also, European Central Bank Vice President Louis de Guindos will deliver a speech, and he will talk about the prospects for monetary policy in the euro area - this is not exactly what euro bulls need right now, but there is still hope for a continuation of the upward correction after his speech. As for the technical picture, the primary task is to protect the support at 1.1728, which the pair closely approached in today's Asian session. Forming a false breakout there creates a good signal to open long positions in continuation of the pair's upward correction. The lower border of the upward correction channel formed on August 20 is also slightly above this level. An important task is a breakout and reverse test from top to bottom of the weekly high of 1.1757, which also forms a buy signal with the aim of recovering to 1.1783, where I recommend taking profits. The next target will be the area of 1.1804. In case EUR/USD falls in the first half of the day and trading isn't active in the 1.1728 area, I advise you to postpone long positions and wait for the low to update at 1.1697. It is possible to buy EUR/USD immediately on a rebound from the support of 1.1666, counting on an upward correction of 15-20 points within the day. 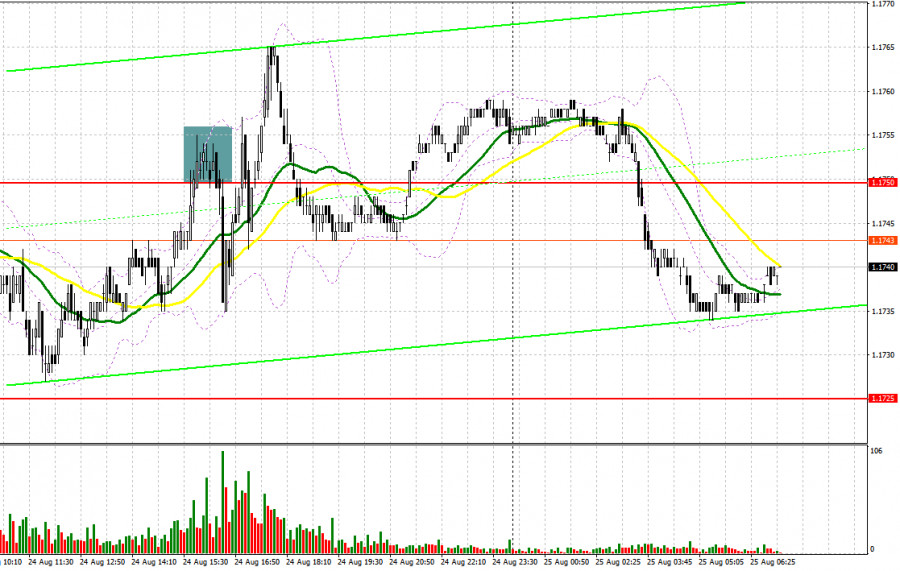 Although the bears fought back in the area of the next local resistance at 1.1775 yesterday, it is still premature to talk about regaining control. Disappointing data on Germany may increase the pressure on the euro, so the initial goal is to regain control of the 1.1728 level. Only a breakout and reverse test of this range can return the pressure to the pair and create a signal to sell the euro in order to renew last week's low of 1.1697. The next target will be the area of 1.1666, but one can hardly count on such a powerful downward movement today. In case of further upward correction during the European session, only the formation of a false breakout at the level of 1.1757 can generate the first signal to open short positions in hopes of restoring the bear market. If traders are not active at 1.1757, it is best to postpone selling until the test of the larger resistance at 1.1783. I recommend selling the pair immediately on a rebound counting on a downward correction of 15-20 points only from a high like 1.1804. 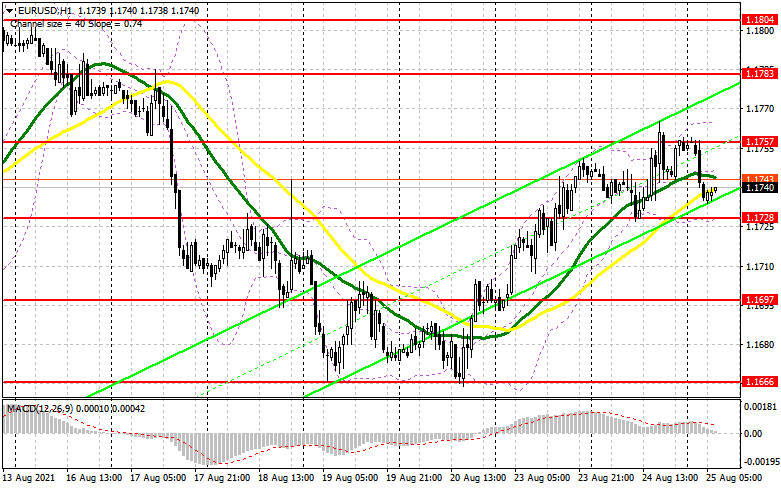 Trading is carried out in the area of 30 and 50 moving averages, which indicates the attenuation of the upward correction.

Interesting? Write a comment below.
 albeit with great difficulty, EUR/USD: plan for the European session on August 25. COT reports. Upward trend in the euro continues
Forward 
Backward 