EUR/USD: plan for the European session on August 27. COT reports. Euro is trading in a channel with the prospect of further

Yesterday, there was only one signal that was formed for entering the market in the second half of the day. Let's take a look at the 5 minute chart and break it down. Nothing interesting happened in the morning. It is clearly seen that against the background of low volatility, even after the release of a number of fundamental reports for the eurozone, no activity on the part of bulls and bears was observed. In the afternoon, the bulls managed to defend the support at 1.1755 and formed a long entry point there. However, the pair did not show a particularly active upward recovery from this level.

No important fundamental statistics for the euro area this morning, so the pair will continue to trade in a narrow horizontal channel with the prospect of reaching new weekly highs. The market is under the control of the bulls. The upside potential in EUR/USD may well remain as the focus shifts this afternoon to Federal Reserve Chairman Jerome Powell's speech at Jackson Hall. Predicting the pair's direction during Powell's speech will be very difficult, so it is best to navigate through the statements made. As for the technical picture for the European session: the primary task of the bulls is to protect the support at 1.1745. Only the formation of a false breakout there creates a good signal to open long positions in continuation of the upward trend with the key goal of reaching a high like 1.1766. The more important task of the bulls will be the breakout and reverse test from top to bottom of this level, which also creates a buy signal with the aim of retracing to 1.1784, where I recommend taking profits. The next target will be the area of 1.1801, but this level will be available only after Powell's speech and if an upward trend forms. The 1.1801 update will be evidence of continuing the upward trend. In case EUR/USD falls in the first half of the day and it is not active in the 1.1745 area, I advise you to postpone long positions and wait for the renewal of the low at 1.1727, which a few days ago once again helped out bulls of the European currency. It is possible to open long positions in EUR/USD immediately on a rebound from the support of 1.1697, counting on an upward correction of 15-20 points within the day. 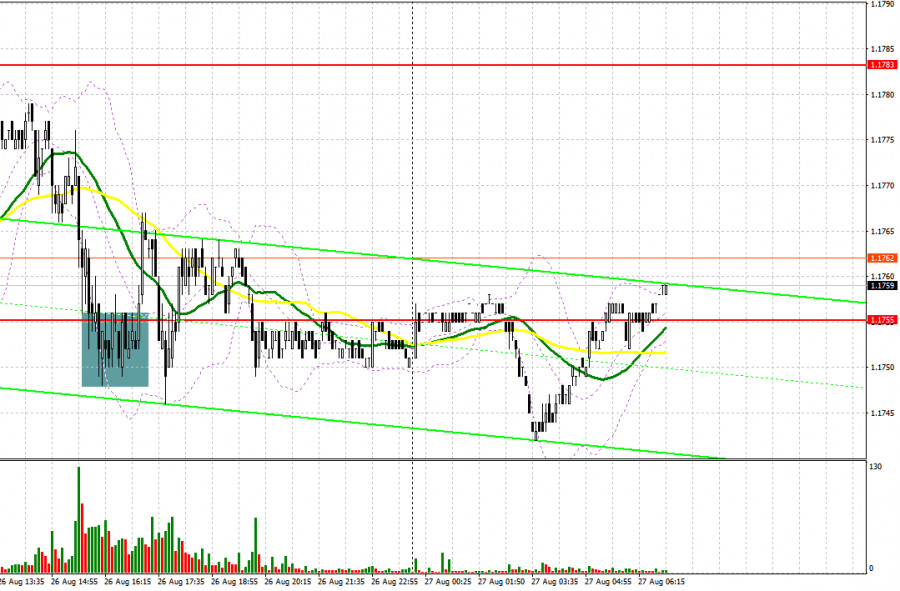 Although the bears tried to fight back the bulls yesterday, however, during the US session, we did not see a major sale during Powell's speech. Low volatility will continue today and beyond. The initial task of the bears during the European session is to regain control of the 1.1745 level. Only a breakthrough and reverse test of this range will return pressure to the pair and generate a signal to sell the euro in order to renew the low at 1.1727. The next target will be the area of 1.1697, but today we can count on such a powerful downward movement only after Powell's speech in Jackson Hole. In case EUR/USD grows further during the European session, only the formation of a false breakout at the level of 1.1766 can create the first signal to open short positions in hopes of restoring the bear market. In case it is not active at 1.1766, it is best to postpone selling until the test of the larger resistance at 1.1784. I recommend selling the pair immediately on a rebound counting on a downward correction of 15-20 points only from a high like 1.1801. 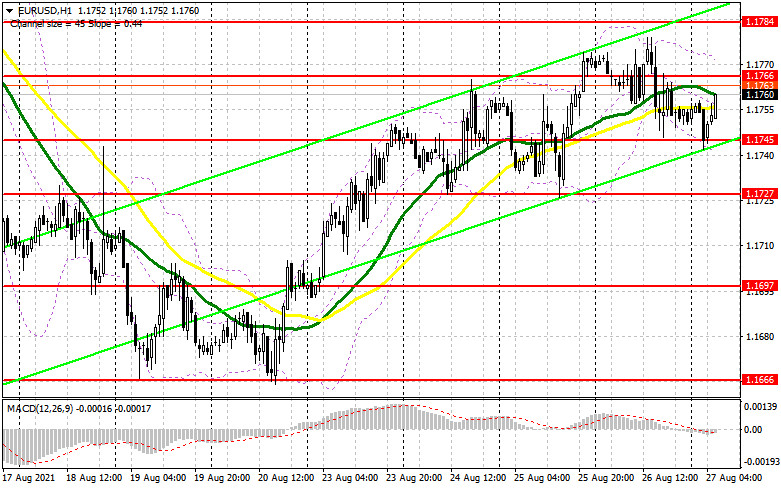 Interesting? Write a comment below.
 EUR/USD: plan for the European session on August 27. COT reports. Euro is trading in a channel with the prospect of further
Forward 
Backward 