EUR/USD: plan for the European session on August 3. COT reports. Manufacturing activity is declining, followed by the European

Yesterday, the European currency tried to continue its bullish growth after a report on Germany was published, but the reports on the manufacturing activity of the eurozone did not allow bulls to enlist the support of big players. Let's take a look at the 5 minute chart and break down the trades. In my morning forecast, I paid attention to the 1.1882 level and advised you to make decisions on entering the market. The breakthrough and consolidation above the resistance of 1.1882 and the subsequent trade at this level resulted in forming a signal to buy the euro, which was realized immediately after the release of data on retail sales in Germany, as the report turned out to be much better than the forecasts of economists. In the second half of the day, data on the euro area limited the upside potential of the pair, and the return to the level of 1.1882 did not allow us to achieve clear signals to enter the market, since trading was constantly carried out either below or above this range.

Before talking about further prospects for the EUR/USD movement, let's see what happened in the futures market and how the Commitment of Traders (COT) positions have changed. The COT report for July 27 continued to observe the market bias towards sellers of risky assets. Long positions contracted and short positions increased, which caused the overall net position to decrease. The results of the Federal Reserve meeting indirectly influenced the euro's direction, but given the committee's wait-and-see position, there are fewer people willing to buy the US dollar. The data on GDP in the US and the eurozone were quite different: in the US, the report fell short of the forecasts of economists, and in the eurozone, on the contrary, the indicator turned out to be better than forecasted, which pushed the euro to rise. However, this fact is no longer taken into account in the current COT report, so it seems that the balance of power remains on the side of the bears. The COT report indicates that long non-commercial positions fell from 208,669 to 202,245, while short non-commercial positions rose from 162,847 to 164,119. At the end of the week we can expect to receive important fundamental reports on the change in the number of employees in the non-agricultural sector of the United States of America,which can significantly affect the direction of the EURUSD pair. The strong data will provide a strong bullish momentum for the US dollar, which will strengthen its position, as the Federal Reserve continues to cite a weak recovery in the labor market in its forecasts. The total non-commercial net position decreased from 45,822 to 38,126. But the weekly closing price increased slightly from 1.1791 to 1.1804. 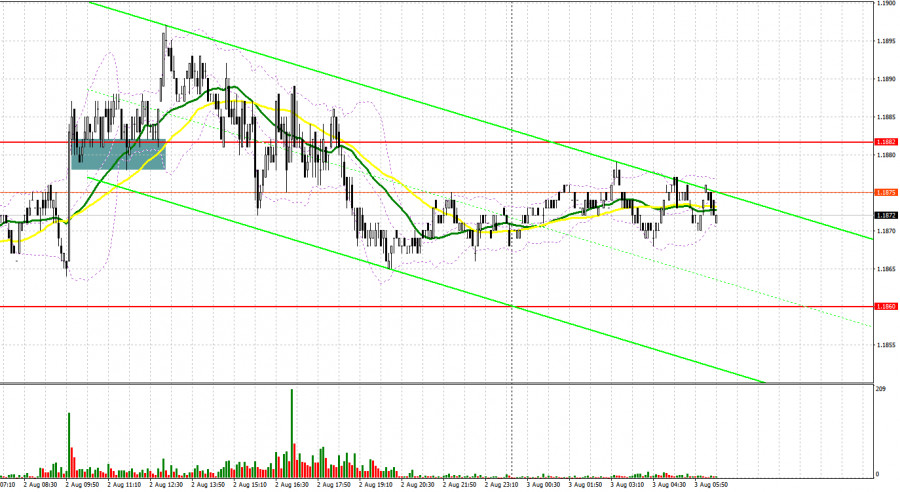 So far, the bulls are doing an excellent job of their task and are gradually pulling the pair to last week's highs. This morning we will follow the change in the producer price index of the eurozone, but it is unlikely to significantly affect the euro. If the data greatly exceeds the forecasts of economists, then we can expect a retest of the resistance at 1.1888. Only a consolidation at this level with a reverse test from top to bottom generates a signal to open long positions while expecting the upward trend to reach a high like 1.1908, from which it will be quite easy to get out to larger resistances. A breakthrough of this area with a similar consolidation forms an additional entry point for long positions, which will lead EUR/USD to new local levels of 1.1937 and 1.1984, where I recommend taking profits. In the event of weak data on the eurozone and a negative market reaction with longs, it is best not to rush. Long positions can be opened if a false breakout is formed in the area of intermediate support at 1.1866. I advise you to buy EUR/USD immediately on a rebound only after the first test of the 1.1843 low, or even lower - from the level of 1.1824, counting on an upward rebound of 15-20 points within the day.

The bears tried their best to slow down the upward correction yesterday and they did a good job. Given the low volatility and the fact that trading is carried out in the area of moving averages, we can expect that after an unsuccessful attempt to break through 1.1888, the pressure on the euro will return. Forming a false breakout there, along with weak data on the eurozone and producer price inflation, creates a signal to sell the euro with the aim of moving to the intermediate support of 1.1866, which was formed at the end of yesterday. A breakthrough and test of this area from the bottom up will return the downward trend for the pair and open the way to the lows of 1.1843 and 1.1824, where I recommend taking profits. If the bears are not active around 1.1888 and we receive strong data on the eurozone this morning, I advise you to open short positions only after a false breakout is formed in the area of last week's high at 1.1908. Selling EUR/USD immediately on a rebound is best only after the test of the new local resistance at 1.1938, or even higher - in the 1.1984 area, counting on a downward correction of 15-20 points. 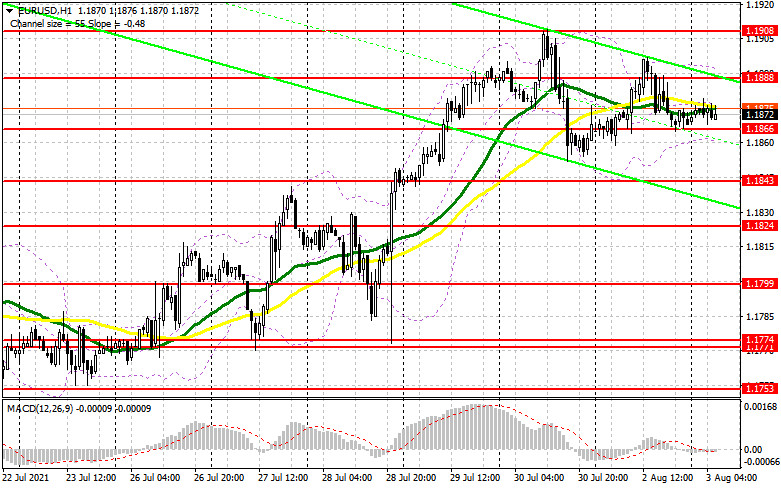 Trading is carried out in the area of 30 and 50 moving averages, which indicates a slowdown in the bull market in the short term.