EUR/USD: plan for the European session on August 4. COT reports. Euro continues to sell. Bears aim for support at 1.1855

No matter how hard the euro bulls try to cling to the market, active selling in the second half of the day breaks the prospects for the euro's further recovery. Several signals to enter the market were formed yesterday. Let's take a look at the 5 minute chart and break down the trades. In my forecast, I drew attention to the 1.1888 level and the high probability of a false breakout there in the afternoon. This is the scenario that led to the formation of a signal to sell the euro. After the release of US reports, the pair quickly fell to the support area of 1.1866, where the bulls tried to regain control over the market, but it did not work out very well. A fairly large number of fundamental reports on the eurozone economy will be released today. The main focus of traders will shift to reports on the PMI in the services sector of the EU countries. It is expected that many July indicators will remain unreconsidered and coincide with the preliminary estimate, which may put pressure on the European currency in the first half of the day, as the bulls will have nothing to cling to until the end of the week.

Now the bulls will focus on the resistance at 1.1886, above which it was not possible to break through once again yesterday. This calls into question the ability of the bulls to take further action at current local highs. Only a reverse test of the 1.1886 area from top to bottom will generate a signal to open long positions with the expectation of a return to the upper border of the horizontal channel at the bottom of the 19th figure, which was created at the end of last week. Only a breakthrough of this range will hit a series of bears' stop orders, opening a direct path to the larger resistance at 1.1937, where I recommend taking profits. In case EUR/USD falls during the European session and weak data for the eurozone, I recommend not to rush into long positions. Forming a false breakout in the 1.1855 area, which has already saved the bulls from a fiasco several times, will lead to creating a new entry point to long positions in order to continue the upward trend. If the bulls are not active at this level, I advise you to wait for the update of the next large low at 1.1827, or buy the pair immediately on the rebound from 1.1799, counting on an upward correction of 15-20 points within the day. 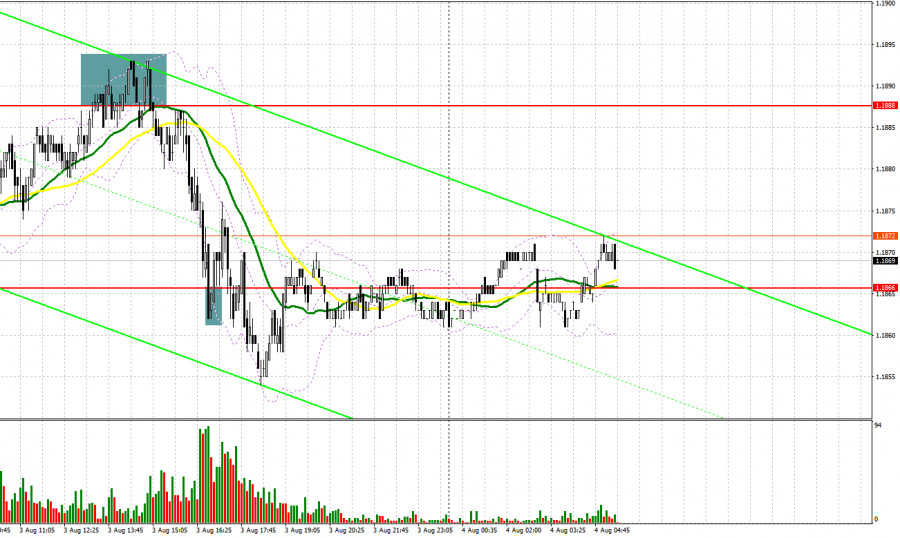 The bears managed to cope with the task yesterday and did not let the pair go above the resistance of 1.1888, which today transformed into 1.1886. Trading is carried out in the area of moving averages, which is still more indicative of the sideways nature of the market. The direction of the pair in the first half of the day will depend on the data from the eurozone and it is likely that the bulls will make another attempt to rise, so the bears need to think carefully about protecting the resistance at 1.1886. Forming a false breakout there and a weaker than expected report on activity in the service sector and the composite PMI of the eurozones - all this forms a signal to open short positions in hopes of a further downward correction to the support area of 1.1855. The next target for the bears will be to break and retest this range, pushing EUR/USD quickly to the 1.1827 low. The next target will be 1.1799, where I advise you to take profits. If EUR/USD grows during the European session and the bulls are not active at 1.1886, it is best to postpone selling until the test of the larger resistance at 1.1908, which is also the upper border of the current horizontal channel. You can also open short positions there only after the formation of a false breakout. I advise to sell the pair immediately on a rebound counting on a downward correction of 15-20 points only from a high like 1.1937. 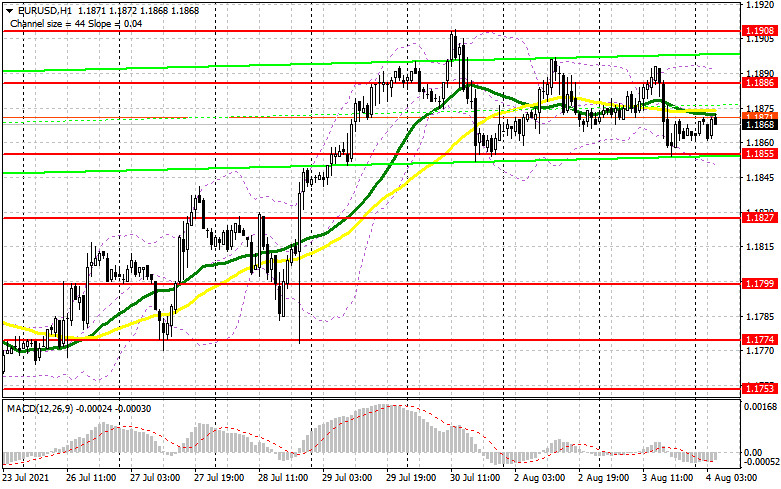 In case of growth, the upper border of the indicator in the area of 1.1890 will act as a resistance. In case of a decline in the pair, support will be provided by the lower border at 1.1855.