Yesterday was a rather boring day, during which the bears did nothing but defend the resistance at 1.1844, after which the activity in the market ended. Let's take a look at the 5 minute chart and talk about where to enter. Resistance at 1.1844, on which I emphasized, worked itself out. Failure to settle above this level and the formation of a false breakout, all this led to creating a signal to open short positions. Similar signals were received from this level in the afternoon. But the bears retreated each time, after moving down by 10-12 points, not wanting to push the pair to new lows. Today all traders will focus on the data on the US labor market. A report on the number of people employed in the nonfarm sector of the United States of America could lead to a surge in volatility. But it should be understood that the data may turn out to be worse than the forecasts of economists, as the indicator released on Wednesday from the ADP for the private sector was disappointing. If the nonfarm data fall short of forecasts, or even worse - they turn out to be below expectations, all this can push EUR/USD to rise. The bulls will focus on the return of the resistance at 1.1845, which was not done yesterday. Moving averages that play on the side of the bears also pass in this range. Only the breakthrough of this area and its reverse test from top to bottom will generate a signal to open long positions in order to return to the resistance of 1.1872. The next challenge for the bulls will be to update this week's high at 1.1898, but this will only happen in case of very weak indicators on the US labor market. I also recommend taking profits in this range. But we can talk about the resumption of the bullish trend only after the breakthrough of 1.1898, which we are unlikely to see today. In case EUR/USD falls during the European session, and everything indicates exactly this, I advise you not to rush into long positions. Forming a false breakout in the 1.1819 area will result in creating a new entry point into long positions, counting on a small upward correction within the day. If the bulls are not active at this level, I advise you to wait for the update of the next large low at 1.1800, or buy the pair immediately on the rebound from 1.1774, counting on an upward correction of 15-20 points within the day. 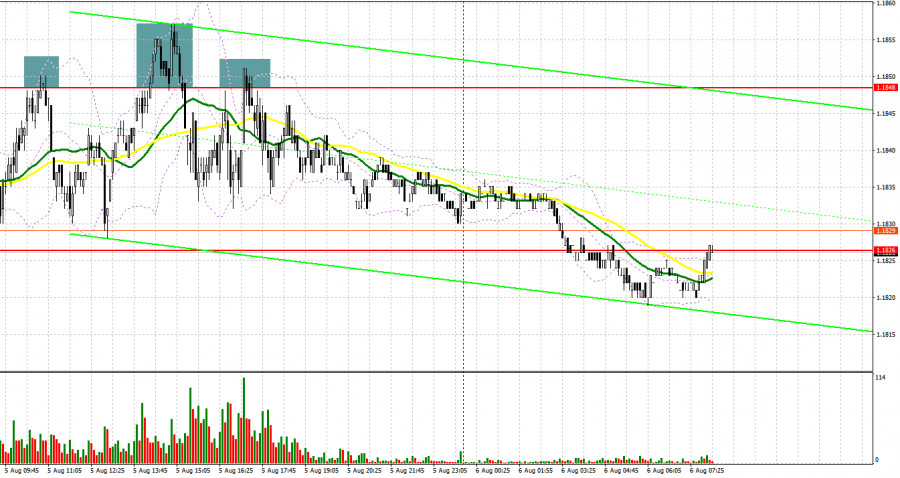 The bears managed to cope with the task yesterday and protected the resistance at 1.1844, generating a lot of sell signals from it. Trading is also carried out below the moving averages, which indicates a slight advantage for the bears. The pair's direction in the morning will depend on a number of fundamental reports for the eurozone countries, which are of little interest to the foreign exchange market. The main task of the bears is to protect the resistance at 1.1845. Forming a false breakout there creates another signal to open short positions in hopes of a further downward correction to the support area of 1.1819. The next target will be a breakthrough and a reverse test of this range, which will quickly push EUR/USD to the 1.1800 low, and the next target will be the 1.1774 area, where I advise you to take profits. It will be possible to get to the level of 1.1774 only in case we receive very good data on the unemployment rate in the US, which should decrease better than the forecasts of economists. If EUR/USD grows during the European session and the bulls are not active at 1.1845, it is best to postpone selling until the test of the larger resistance at 1.1872. You can also open short positions there only after the formation of a false breakout. I advise you to sell the pair immediately on a rebound counting on a downward correction of 15-20 points only from a high like 1.1898, which was formed at the end of yesterday. 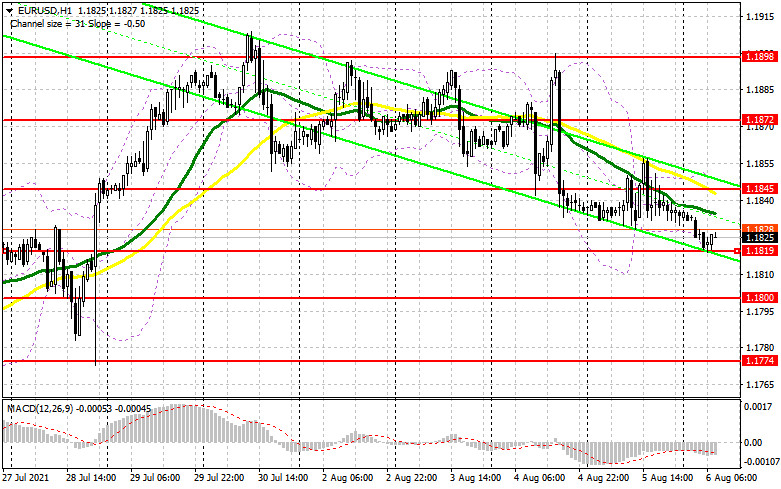 Trading is carried out below 30 and 50 moving averages, which indicates a slight advantage for the bears.