EUR/USD: plan for the European session on August 9. COT reports. Euro collapsed after US labor market report. Bears aim for

The euro fell against the dollar last Friday afternoon after the release of an excellent report on the US labor market, continuing its downward trend observed since the end of last month. If you look at the 5-minute chart, you will see that in the first half of the day, the test of the 1.1819 level occurred with a breakdown, but we did not see a reverse update of this level from the bottom up. Accordingly, no entry point to short positions was formed. The situation unfolded much more interestingly in the second half of the day: surpassing the 1.1800 level resulted in creating an entry point to short positions, which quickly dumped EUR/USD to the 1.1774 support area. But even if you did not manage to orient yourself during the release of the report, the breakdown of 1.1774 and the reverse test from the bottom up became another signal to sell the euro, which pushed the pair to a low like 1.1753. The bears tried to break through the area below this level several times, but failed to do so.

We expect today to be calm, since important fundamental reports will not be released. Most likely, the weak Eurozone Sentix investor confidence indicator will put additional pressure on the euro in the first half of the day, which will keep the market bearish. To prevent this, the bulls will focus on protecting the support 1.1745, which is still today's low. The data on the balance of foreign trade in Germany can help the bulls to implement this idea, but forming a false breakout there creates the first signal to open long positions in hopes of an upward correction of the pair. An equally important task for the bulls will be to return to the control of the resistance at 1.1764. Only a breakthrough of this area and its reverse test from top to bottom will generate a signal to open long positions with the aim of rising to the level of 1.1787, where the moving averages that play on the bears' side pass. The bulls' must update the 1.1808 low, where I recommend taking profits. In case EUR/USD falls during the European session and the bulls are not active in the 1.1745 region, I advise you to wait for the next large low at 1.1715 to update and buy the pair there immediately on a rebound, counting on an upward correction of 15-20 points within the day. 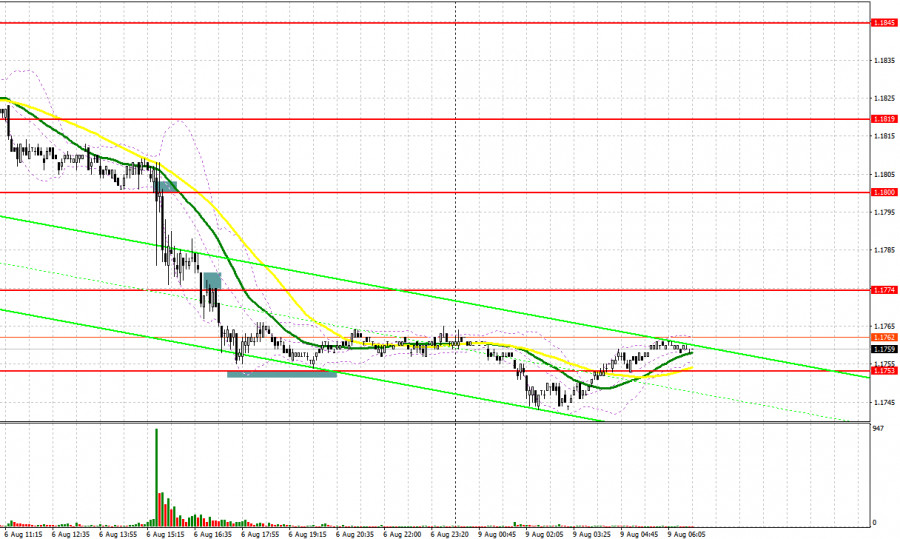 Last Friday, the bears managed to cope with the task and achieved a larger sale of the euro against the US dollar. Trading continues below the moving averages, which indicates the advantage of the bears. The pair's direction at the beginning of this week is likely to remain down. The main task of the bears is to protect the resistance at 1.1764, and in case we receive weak data on the German foreign trade balance, which may turn out to be worse than economists' forecasts due to the summer period and a slight economic downturn, one can count on forming a false breakout in this area. This will be a signal to open short positions in hopes of further downward correction to the area of today's low 1.1745. A breakthrough and retest of this range will quickly push EUR/USD to the 1.1715 low. But, before selling below 1.1745, make sure that no divergence is forming on the MACD indicator, which significantly limits the pair's downward potential. The next target will be the low of 1.1682. In case EUR/USD grows during the European session and the bulls are not active at 1.1764, it is best to postpone short positions until the test of the larger resistance at 1.1787, where the moving averages pass. You can also open short positions there only after forming a false breakout. I recommend selling the pair immediately on a rebound counting on a downward correction of 15-20 points only from a high of 1.1808. 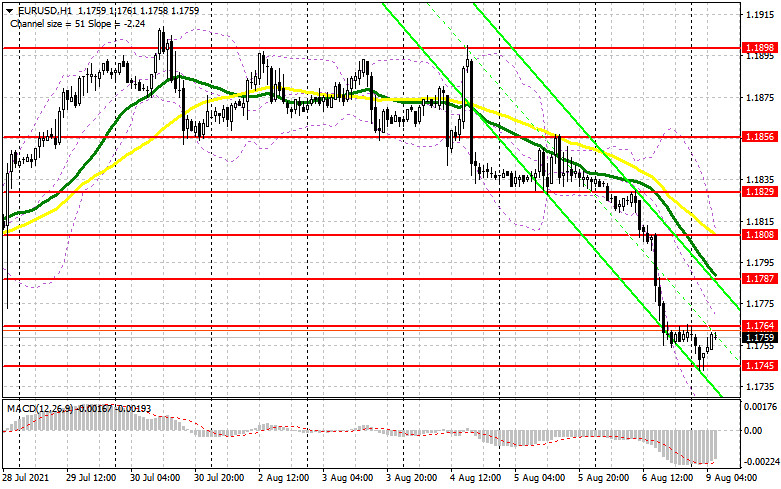 Trading is carried out below 30 and 50 moving averages, which indicates the advantage of the bears.