Fed is not yet ready to cut QE, investors are waiting for J. Powell's speech in Jackson Hole. Overview of USD, EUR, and GBP

Following the closing of the US stock markets on Friday, the markets of the Asia-Pacific countries are trading in the green zone, playing back the reaction to the statement of the Federal Reserve CEO Dallas, Kaplan, who said he was ready to reconsider his call to quickly start reducing the volume of bond purchases if it turns out that the spread of the delta variant of the coronavirus slows down economic growth. Kaplan's statement points to the dominance of dovish sentiment in the Fed and reduces the probability of the beginning of the curtailment of the QE program at the Fed meeting in September.

The global markets are likely to face a slowdown in manufacturing activity. This scenario is proven by the dynamics of several leading indicators, such as the dynamics of exports of the Asia-Pacific countries, the dynamics of the ratio of stocks and orders in the United States, high yield spreads, and the obvious slowdown in the growth of prices for raw materials, in particular, for metals. 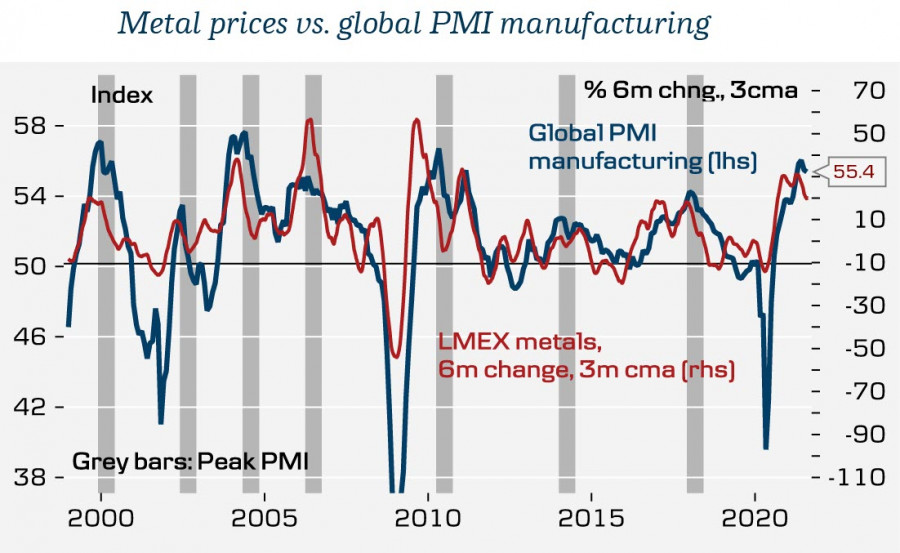 It is believed that there will be a drop in global PMI indices and a slowdown in the production cycle in the next few weeks, which will be accompanied by an increase in demand for defensive assets. The US dollar, for all its external weakness, will remain the market's favorite.

According to CFTC data, speculative traders reduced a small cumulative long position on the US dollar by $ 2.2 billion, reporting to $ 1.55 billion. In general, the dollar's positioning remains weakly optimistic. However, its strong performance from Wednesday to Friday (not reflected in the data in this report) suggests that the next report will be stronger. 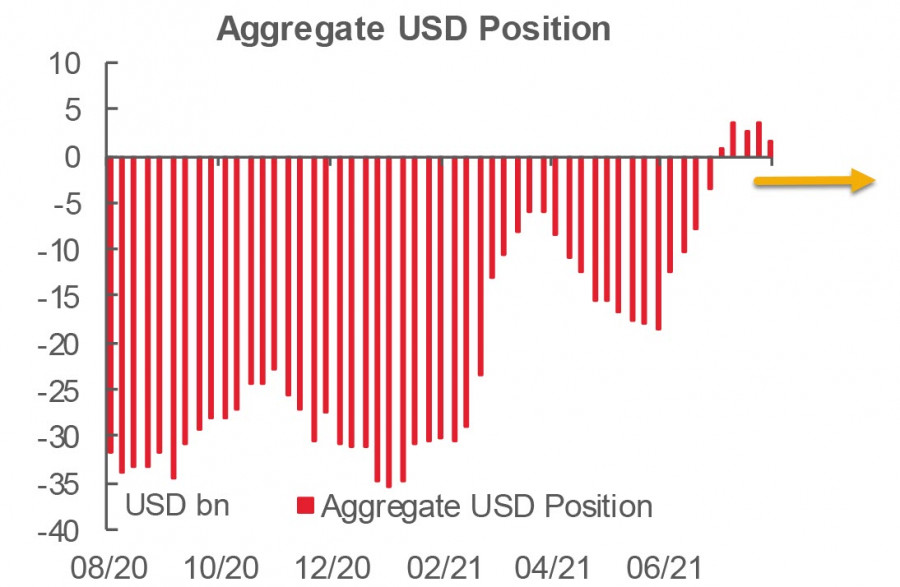 It can be assumed that that the beginning of the week will be neutral for the dollar with a slight bias towards demand growth. Markets will be waiting for the speech of Fed Chairman Powell on Friday at a symposium in Jackson Hole. It should be noted that the speech will be devoted primarily to the economic prospects of the United States, which can have a decisive impact on the positions of investors. Accordingly, strong movements until Friday are possible only if a new unexpected driver appears, but if there is no such driver, the volatility in the coming days will be low.

The euro finally managed to win back some of the losses. The net long position increased by 3.5 billion to 8.4 billion, but there was no upward reversal of the settlement price, since the dollar maintained the dynamics of yields in its favor despite the change in the rhetoric of the Fed members in the dovish direction. This means that investors are still waiting for hawkish steps from the Fed this year. 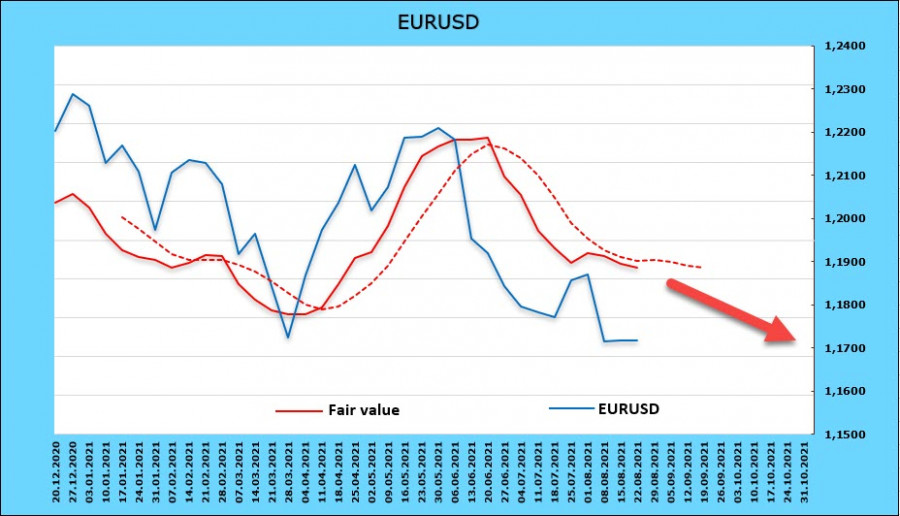 There was an attempt to go below the level of 1.17, but the bears failed to consolidate. The upward pullback gives grounds to assume an upward correction in the 1.1810/30 zone, after which the fall is likely to resume. The long-term target is still in the support area of 1.15.

The pound received several sensitive blows last week, which eventually changed the medium-term expectations in the bearish direction. At first, nothing foreshadowed such a development of events. The report on the labor market showed a steady increase in average wages, which gave reason to expect an increase in inflation. However, inflation in July showed zero growth – there was only a slow down from 3.5% to 2% on an annualized basis, that is, the expected growth in consumer demand due to the earlier opening of the economy did not happen.

Moreover, Friday's retail sales data also turned out to be significantly worse than the forecast. There was a decrease of 2.5% in July and the annual growth slowed down from 9.2% to 2.4%. These are clearly not the figures that the market expected to see.

The NIESR Institute draws attention to the fact that the negative effect is largely the result of a high base, that is, the cessation of low inflation in May-June 2020.

The CFTC report for the pound is generally neutral. The net long position fell by 212 million to 399 million over the week, the preponderance is minimal, and speculators do not give directions. At the same time, weaker-than-expected consumer demand led to a drop in bond yields, which eventually reflected a downward reversal of the settlement price. 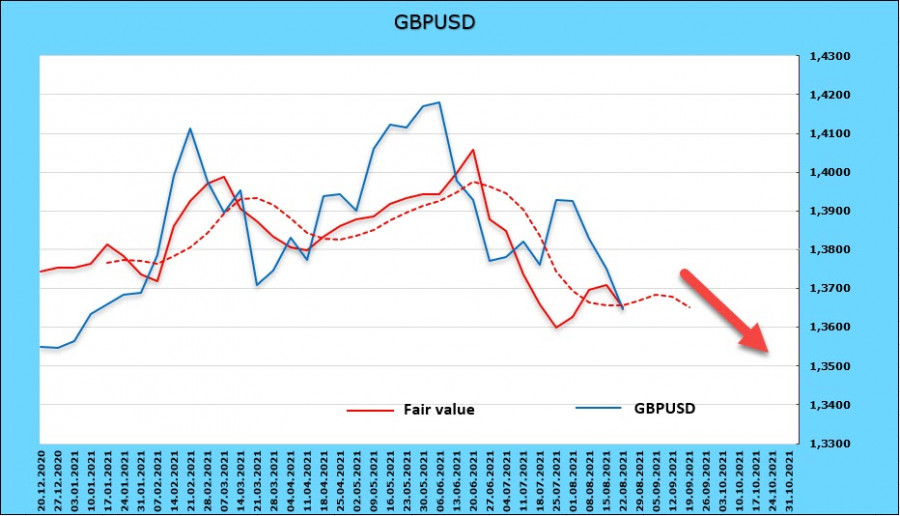 If we rely on fundamental indicators, then the pound's inability to rely on internal factors gives reason to expect a continuation of the decline. On Monday morning, the pound held above the support level of 1.3570, this is a good factor for purchases with the aim of returning to the trend line of 1.3770/90. At the same time, the weakness of the fundamental grounds for strengthening the pound suggests another attempt to test the support of 1.3570 with a subsequent breakdown. In this case, the growth scenario to 1.3770/90 is canceled, the sale is on a breakdown of support, and the nearest target is the resistance zone of 1.3480/3510.

Interesting? Write a comment below.
 and GBP, EUR, Fed is not yet ready to cut QE, investors are waiting for J. Powell's speech in Jackson Hole. Overview of USD
Forward 
Backward 