Forecast and trading signals for EUR/USD on August 12. Analysis of the previous review and the pair's trajectory on Thursday 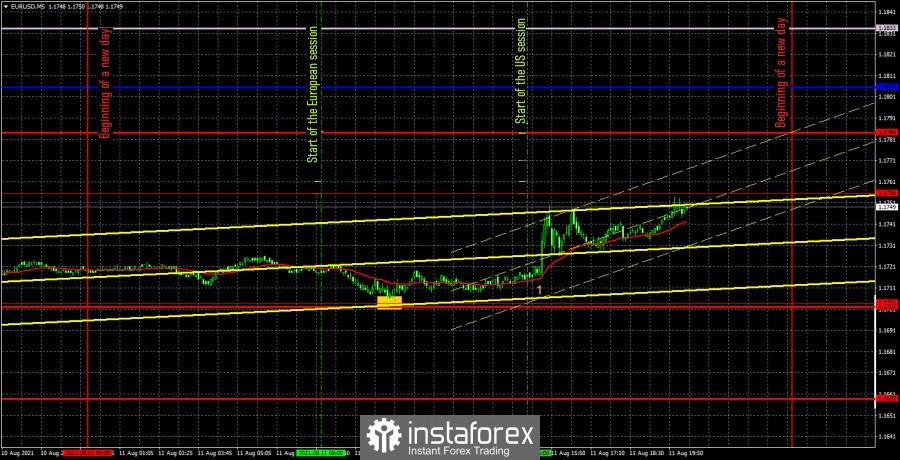 The EUR/USD pair showed nothing extraordinary on Wednesday. You could even say that the movements were absolutely predictable. Before the inflation report was published, an absolute flat with low volatility continued, and then there were quite active movements after it was released. The only thing that was difficult to predict was the actual value of the report and the market's reaction. As it turned out, the consumer price index was 5.4% y/y, which fully coincides with the previous value. Markets expected the rate of price growth to slightly decrease, to 5.3% y/y, but this did not happen. Thus, we can say that the US dollar fell in price due to the fact that inflation did not start to slow down in the US. Although, as we have already said, the inflation indicator itself is a rather controversial indicator. For example, a further rise in the CPI could mean that traders are more likely to wind down the quantitative stimulus program in the near future, which is already good for the dollar. One way or another, there was only one report during the day, and there were no signals at all during the day. Volatility reached 45 points on Wednesday, so we once again note that with such volatility, it is not necessary to count on the formation of many profitable signals. Throughout the entire day, the price has never reached even a single important line or level. There was only one subtle point that could be used to open a trade. In the morning the price approached the extremum level of 1.1704 at a distance of two points. Thus, here, if desired, one could see a rebound from the level and a buy signal. This is a completely unobvious moment, however, inaccurate rebounds occur not only when the price goes down a dozen points below the level. Today, too, there was an inaccurate rebound, after which a rather strong upward movement began. Thus, it was possible to earn 20-30 points of profit. 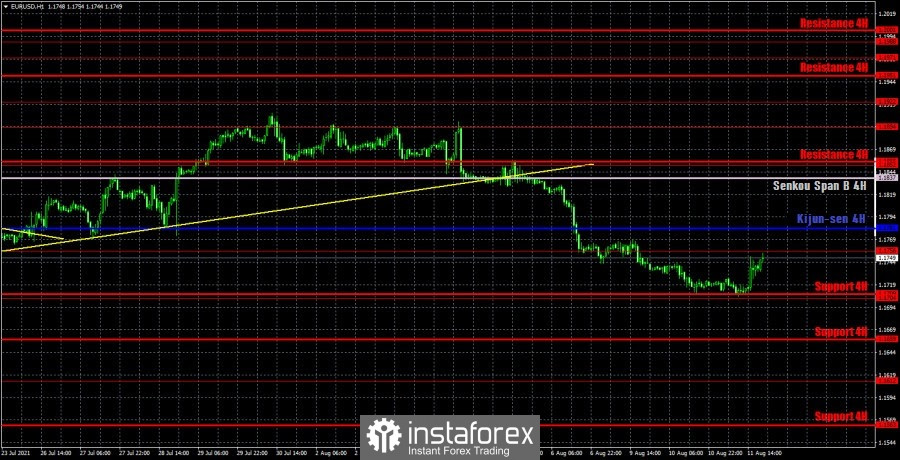 The technical picture on the hourly timeframe is fully in line with our expectations. Yesterday we said that with a high degree of probability, the price will rebound from the level of 1.1700 and start an upward movement. We are still awaiting the start of a new upward trend. It is, of course, still too early to talk about a full-scale trend, but not overcoming the level of 1.1700 is a weighty argument in favor of growth. On Thursday, we still recommend trading from important levels and lines. The nearest important levels at this time are 1.1704, 1.1756, 1.1852, 1.1894, as well as the Senkou Span B (1.1837) and Kijun-sen (1.1781) lines. The Ichimoku indicator lines can change their position during the day, which should be taken into account when looking for trading signals. Signals can be rebounds or breakthroughs of these levels and lines. Do not forget about placing a Stop Loss order at breakeven if the price moves 15 points in the right direction. This will protect you against possible losses if the signal turns out to be false. On August 12, there will be no important macroeconomic publications either in the United States or the European Union. Only minor ones. In the EU - the volume of industrial production in June, and in the US - the number of applications for unemployment benefits. Both of these reports are unlikely to provoke any market reaction. Considering that there was an important report today, and the overall volatility of the day was 45 points, it is unlikely that it will be stronger on Thursday. 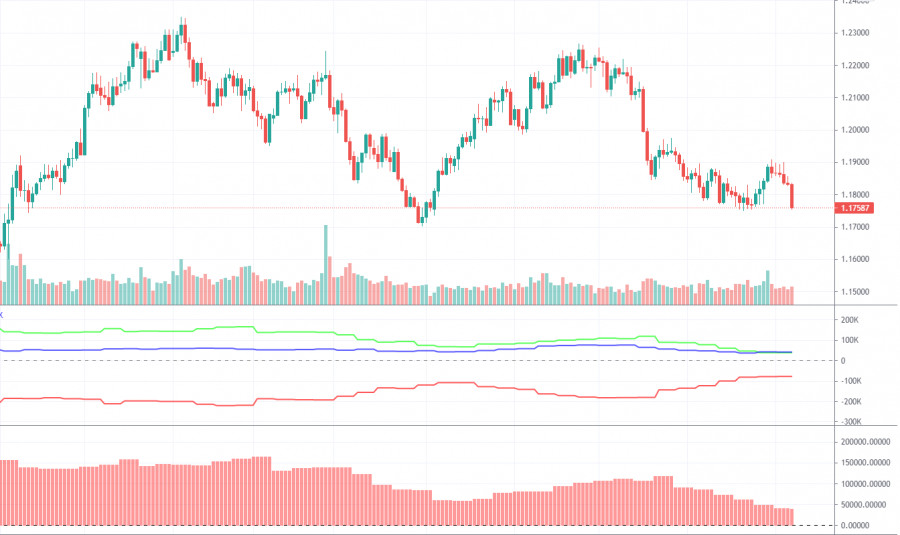 Interesting? Write a comment below.
 Forecast and trading signals for EUR/USD on August 12. Analysis of the previous review and the pair's trajectory on Thursday
Forward 
Backward 