Forecast and trading signals for EUR/USD for August 20. Detailed analysis of the pair's movement and trade deals. The bears 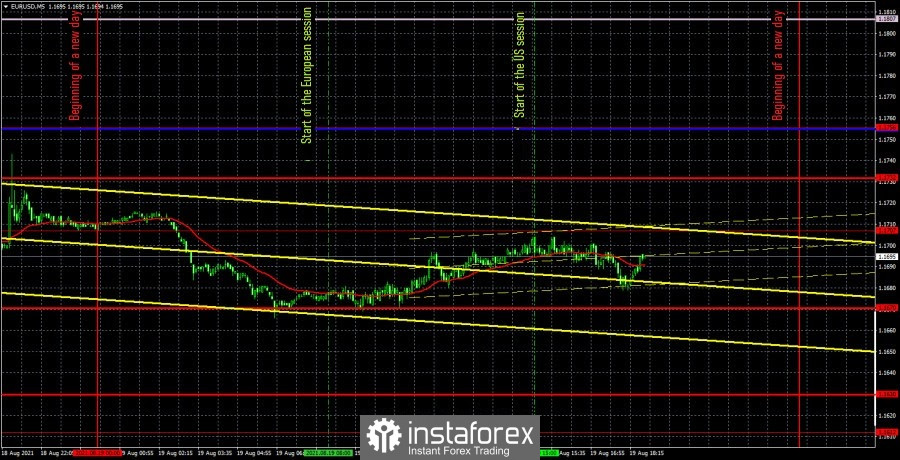 The EUR/USD pair was trading rather weakly again on Thursday. Even taking into account the night traffic. The total volatility of today was 49 points, which is again very, very small, even for the EUR/USD pair. All trading days can be easily divided into two periods: night and day. At night, the pair's quotes fell and this could only be a reaction to the Federal Reserve's minutes, after which, first, within literally 10 minutes, the pair, on the contrary, rose by 50 points. And at night the quotes were already falling and lost the same 50 points by Thursday morning. And during the daytime part of Thursday, the pair rose by 40 points. These are the movements we saw today. We will not go into more detail about the Fed minutes now, since it is already well covered. Let's just say that the minutes did not contain anything extraordinary. But traders found reasons to buy the dollar. Well, at least not as strong as two months ago, when Fed Chairman Jerome Powell first hinted at a possible curtailment of the quantitative stimulus program. Not a single important macroeconomic report has been published in the United States or the European Union today. And also any other event. Thus, traders had nothing to react to during the day. Since the price passed even less than 50 points in the daytime, it is not surprising that not a single trading signal was formed during the day - the price simply did not cross important levels or lines. Recall that support levels (thick red lines) do not participate in the formation of signals. Therefore, rebounds from the level of 1.1670 could not be used to open long positions. 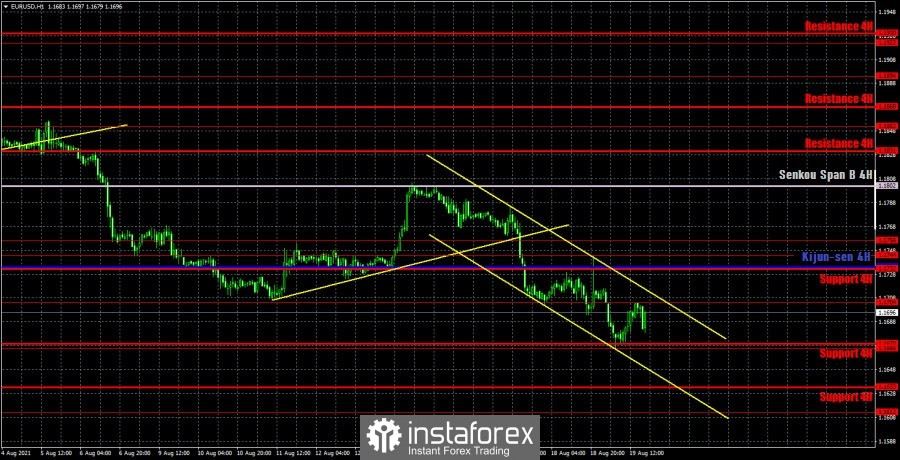 Yesterday, the pair's quotes stopped near the level of 1.1666 on the hourly timeframe. And today they have grown to the extremum level of 1.1704, from which the price has repeatedly bounced off. In addition, today we have formed a descending channel, which now supports those who are trading down, and also serves as a clear guideline for traders. Before the price settles above it, one should not expect a strong growth of the pair. Although we remind you that we are still expecting the formation of a new upward trend, since we believe that the dollar's growth in the past few weeks is not entirely fair. After all, it is being strengthened by and large solely on the expectations of the markets for the curtailment of the Fed's QE program. However, no one knows when this will happen and how long this process will last. But the dollar has already risen quite well in advance. On Friday, we continue to recommend considering trading from important levels and lines. The nearest important levels at this time are 1.1612, 1.1666, 1.1704, 1.1744, 1.1805, as well as the Senkou Span B (1.1802) and Kijun-sen (1.1733) lines. The Ichimoku indicator lines can change their position during the day, which should be taken into account when looking for trading signals. Signals can be rebounds or breakthroughs of these levels and lines. Do not forget about placing a Stop Loss order at breakeven if the price moves 15 points in the right direction. This will protect you against possible losses if the signal turns out to be false. The calendars of macroeconomic events in the United States and the European Union are empty on August 20. The volatility for the pair remains rather weak, but from time to time the pair still shows volatility around 70-80 points. True, we do not expect active trading tomorrow. 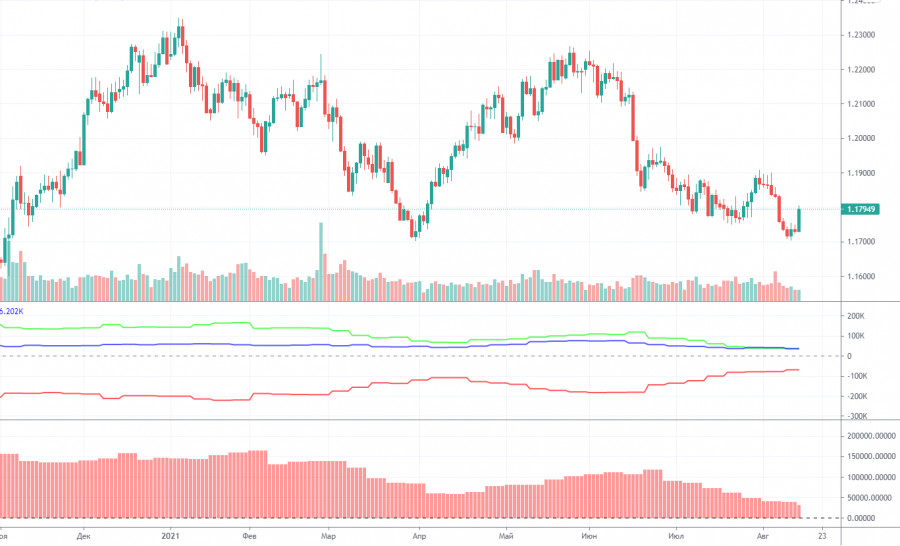 The EUR/USD pair fell by 140 points during the last reporting week (August 3-9). Since the European currency has generally fallen in recent weeks, it is not surprising that the Commitment of Traders (COT) report showed that the bullish sentiment has weakened among professional traders. However, the euro/dollar pair has been declining in recent weeks very reluctantly, and major players have massively stopped closing buy contracts and open sell contracts. A group of non-commercial traders opened 11,000 Buy-contracts (longs) and 18,000 Sell-contracts (shorts) during the reporting week. Thus, the net position for professional players decreased by another 8,000. However, the indicators below the chart show that although the net position continues to decline, the rate of its decline is decreasing. In addition, as we have already said, the euro dropped to the level of 1.1700, around which the probability of an upward reversal is very high. The first indicator shows that the green and red lines (net positions of the "non-commercial" and "commercial" groups) continue to move towards each other, which means the continued weakening of the upward trend. Recall that when the lines begin to narrow, it means the end of the current trend. However, at the same time, the situation on the chart looks just like a correction. Thus, we believe that at this time, both indicators are signaling exactly a correction. As before, we must not forget that the Federal Reserve has not yet completed the quantitative stimulus program, thanks to which the US economy continues to be pumped with money, which provokes an increase in inflation and an increase in the supply of the dollar in the foreign exchange market. Therefore, we are still expecting a new round of decline in the dollar. The sentiment of the major players remains bullish as the total number of buy contracts still exceeds the number of sell contracts.

Interesting? Write a comment below.
 Forecast and trading signals for EUR/USD for August 20. Detailed analysis of the pair's movement and trade deals. The bears
Forward 
Backward 