Forecast and trading signals for GBP/USD for August 19. Detailed analysis of the movement of the pair and trade deals. British 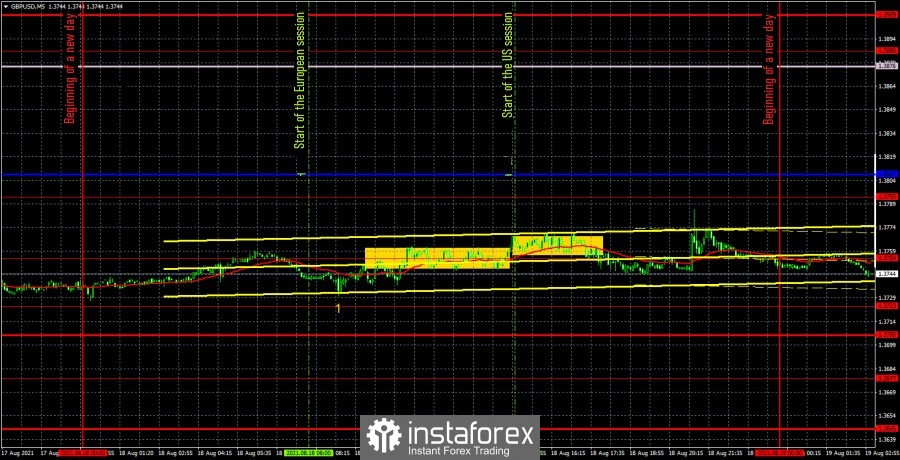 The GBP/USD pair moved very weakly on August 18, and no sensible and strong signals were formed during the day. Now it is already possible to recall with nostalgia the times when 4-6 signals were formed per day, and the pair passed 100-130 points a day, which made it possible to open several trading positions at once and generally trade very actively. Now, it turns out to open a maximum of one deal per day, and the average volatility of the pair has already slipped to the area of 70 points a day. During the past day, not a single interesting signal was generated. With two elongated rectangles, we marked two flat periods. The first one is at the European trading session, the second one is at the US one. Thus, by themselves, these two time periods did not allow traders to open any positions. In addition, quotes circled around the extreme level of 1.3754 all day. On the second or third breakthrough, it became clear that the pair would be flat. Markets also managed to ignore a very important and significant report on British inflation, which, unlike the European one, differed from the previous value and from the forecast. However, traders found nothing special about UK inflation slowing to 1.8%. Recall that the possible decision of the Bank of England to begin curtailing the asset purchase program, which Andy Haldane actively voted for at the last two meetings, was associated with the rise in inflation. Now the Bank of England has catastrophically fewer reasons to wind up this program in the near future. But the markets worked out the Federal Reserve's minutes in the evening, which, in any case, should not have been traded for, since it came out too late in time. However, the pair in any case remained in the "range of the day", although it went up 40 points in 10 minutes. 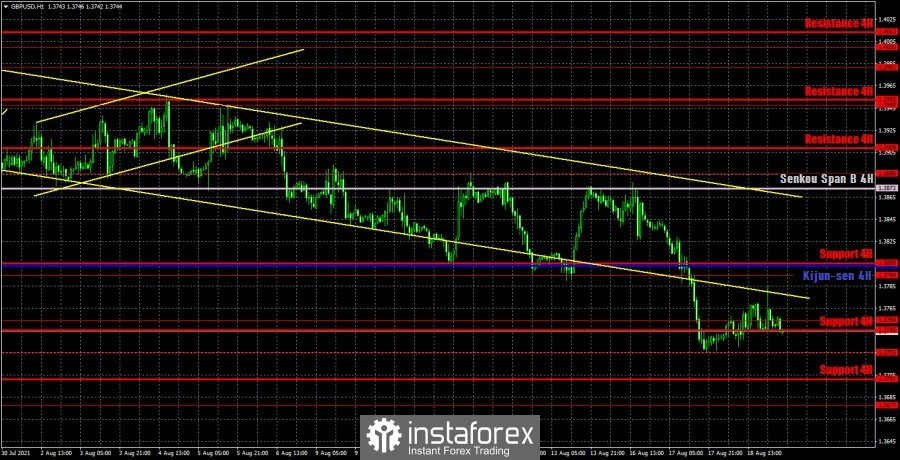 The pound/dollar pair maintains a downward trend on the hourly timeframe, as it is located below the descending channel, as well as below the Ichimoku indicator lines. Thus, the pound may continue to fall in the near future, although we have long awaited the formation of a new long-term upward trend. However, the bulls are not yet ready to buy the British currency, and the US currency is receiving unexpected support from Afghanistan. Thus, the dollar continues to rise in a not too hasty manner. We continue to draw the attention of traders to the most important levels and recommend trading from them: 1.3677, 1.3725, 1.3754, 1.3794, 1.3886. Senkou Span B (1.3873) and Kijun-sen (1.3802) lines can also be sources of signals. It is recommended to set the Stop Loss level at breakeven when the price passes in the right direction by 20 points. The Ichimoku indicator lines can move during the day, which should be taken into account when looking for trading signals. On Thursday, August 18th, nothing interesting is planned in either the UK or the US. However, logically, an upward rollback should begin today, as this is the nature of the pair's movements in the last three weeks. This entire period is placed on the chart, so we recommend that you pay attention to this moment. Therefore, there is nothing else to pay attention to except technique. A rather important report on retail sales will be released in the UK on Friday, however, market participants may not be interested. Overall, this is not the best time to work with the pair. However, the euro/dollar pair has been moving in a way that has not been the best for several months. It remains only to work with what is. 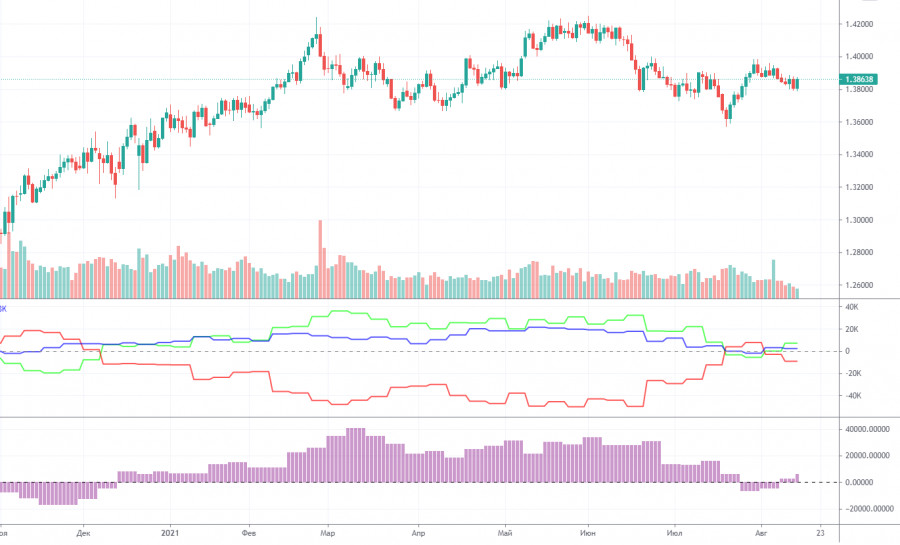 The GBP/USD pair fell by 40 points during the last reporting week (August 3-9). And, if big players continue to reduce their net position in the euro, then in the pound's case, professional traders started to buy the British currency again. Pay attention to the green line of the first indicator (net position of the "non-commercial" group) - it turned up and is growing. Thus, we might be witnessing an emerging new upward trend. However, major players were not particularly zealous in opening new contracts in the reporting week. To be more precise, they only closed them. The number of Buy-contracts (longs) for non-commercial traders decreased by almost 2,000, and 5,500 Sell-contracts (shorts). However, this still means that the net position has grown by 3,500, and the mood of the most important group of traders has become more bullish. Specifically "more bullish" and not "less bearish", because at this time the non-commercial group has more buy contracts that are open than that of sell (shorts) (43.7 thousand versus 37.6 thousand). This suggests that the bullish sentiment may indeed intensify in the coming months. Moreover, the technical picture for the pound is approximately the same as for the euro: quotes dropped to the low of the first round of correction against the upward trend and were unable to continue moving down. Therefore, the probability of a new round of the upward movement is high. As you can see, both Commitment of Traders (COT) reports and technical analysis predict approximately the same scenario. Consequently, we have the right to expect a return of the pound/dollar quotes to the level of 1.4240.

Interesting? Write a comment below.
 Forecast and trading signals for GBP/USD for August 19. Detailed analysis of the movement of the pair and trade deals. British
Forward 
Backward 