Forecast for EUR/USD on August 11 (COT report). The US dollar slows down ahead of the inflation report 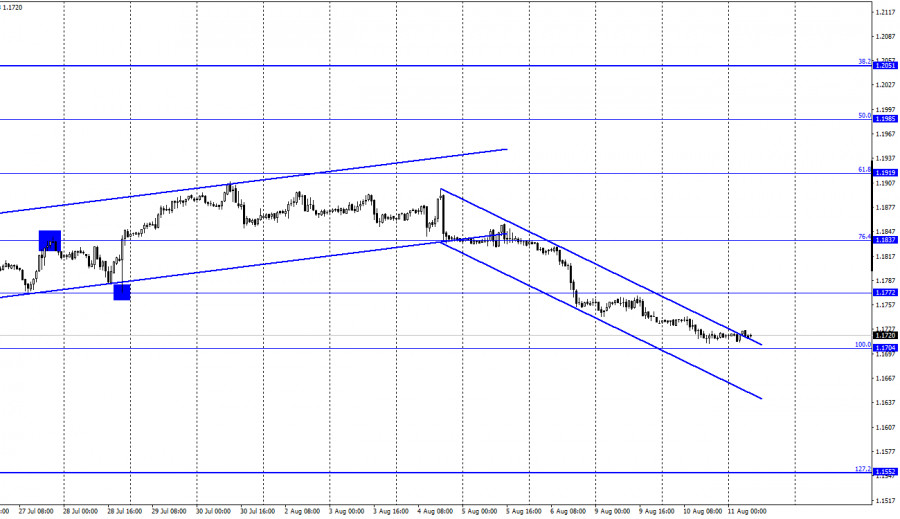 The EUR/USD pair on Tuesday had a very weak drop in quotes in the direction of the corrective level of 100.0% (1.1704). The rebound of the pair's exchange rate from this level will favor the EU currency and some growth in the direction of the level of 1.1772. Closing quotes below the level of 100.0% will increase the chances of continuing the fall in the direction of the next corrective level of 127.2% (1.1552). Also, closing the pair's rate above the downward trend corridor will allow us to count on the beginning of a new segment of the pair's growth. The information background on Tuesday was extremely weak. At the beginning of the week, several Fed members gave their comments, who confirmed that it would be advisable to start considering the issue of completing the QE asset purchase program in the near future. Thus, perhaps their attitude helped the US dollar a little.

However, a much more important event will take place in America today. The inflation report is one of two indicators that the Fed is closely watching. The higher the consumer price index is, the more likely it is that the Fed will intervene in the uncontrolled growth of consumer prices. Moreover, the same representatives of the Fed have already designated the current level of inflation as a target in the medium term. Thus, the US Central Bank should no longer allow further price increases. Therefore, today's report is very important. If inflation continues to rise, then the US dollar may continue to grow, as the chances of tightening monetary policy will increase. If inflation starts to decline, then the US currency may also begin to decline. In any case, bear traders will have to break through the level of 100.0% (1.1704), which will not be so easy to do. Also, today, FOMC members Raphael Bostic and Esther George will speak, who can also speak about the timing of the completion of the asset purchase program. 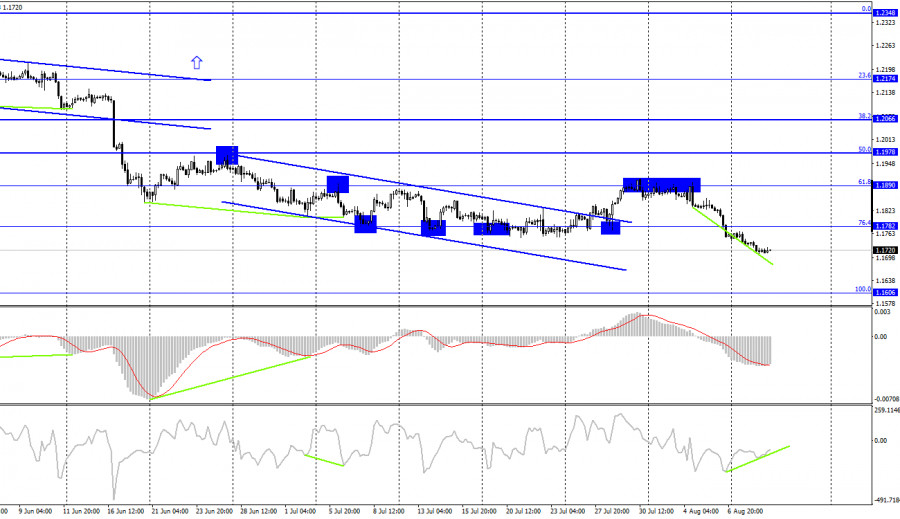 On the 4-hour chart, the pair's quotes were fixed under the corrective level of 76.4% (1.1782), which allows us to count on the continuation of the process of falling quotes in the direction of the next Fibo level 100.0% (1.1606). The CCI indicator is currently brewing a bullish divergence, which may coincide with the rebound of quotes from the level of 1.1704 on the hourly chart.

On August 11, the calendar of economic events in the European Union again does not contain a single interesting entry. But in America, on this day, an inflation report will be released and an inflation report without taking into account food and energy prices, which is considered more important for the Fed. Thus, in the afternoon, traders can trade more actively. 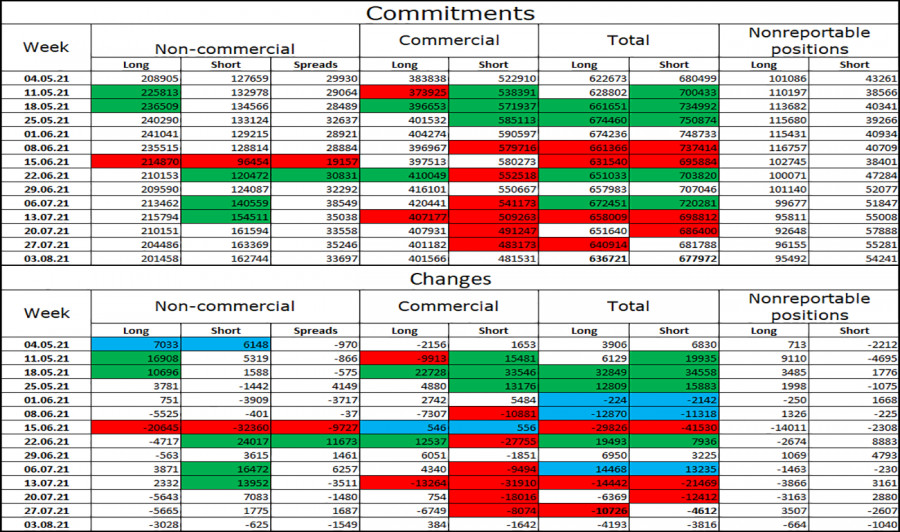 The latest COT report showed that during the last reporting week, the mood of the "Non-commercial" category of traders practically did not change. Major players closed 625 short contracts on the euro and closed 3,028 long contracts. Thus, in the last seven weeks, the number of short contracts focused on the hands of speculators has increased by almost 70 thousand, and the number of long contracts has decreased by 14. Therefore, a further fall in the European currency is very likely, according to COT reports. And the past week gives reason to assume that it is the pair's fall that will continue, but at the same time, it won't be easy to close below the area of 1.1730-1.1760.

Interesting? Write a comment below.
 Forecast for EUR/USD on August 11 (COT report). The US dollar slows down ahead of the inflation report
Forward 
Backward 