Yesterday, the US PMIs came out mixed, not very convincing, and failed to provide the indicator of investor risk sentiment that we expected. The final Markit Manufacturing PMI for July was raised from 63.1 to 63.4, while the ISM Manufacturing PMI was even worse: 59.5 versus 60.6 in June. As a result, the euro ended the day at the close of Friday - no price change. The next event that can show the risk sentiment of the big players will be Friday's employment release from the Labor Department. The forecast for new jobs in the non-agricultural sector is 880-920,000, the unemployment rate is expected to decline from 5.9% to 5.7%. The euro's growth at such powerful indicators will undoubtedly set a medium-term weakening of the dollar in all markets, the fall of the euro will show the resilience of investors to the expectation of a tightening of monetary policy. 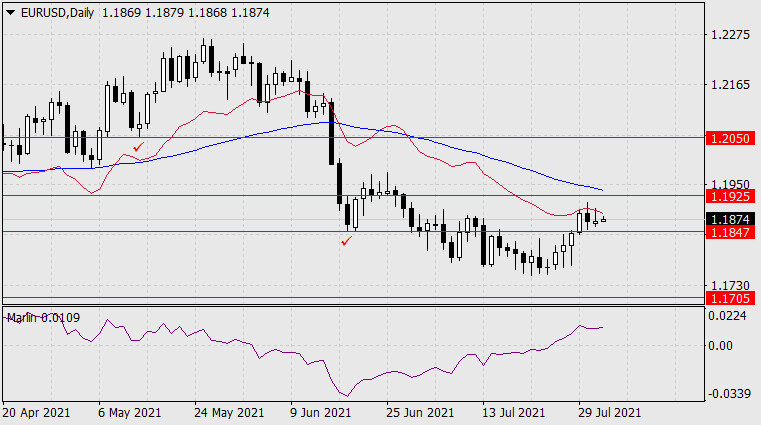 The price does not dare to go beyond the balance indicator line on the daily scale chart, which will lead it to fight the resistance of the MACD line (1.1925 and higher). Also, the price is still hesitating to overcome the lower level of 1.1847 (low on June 18), so that, after consolidating below it, returns to the downward track. This is hindered by the growing Marlin oscillator. 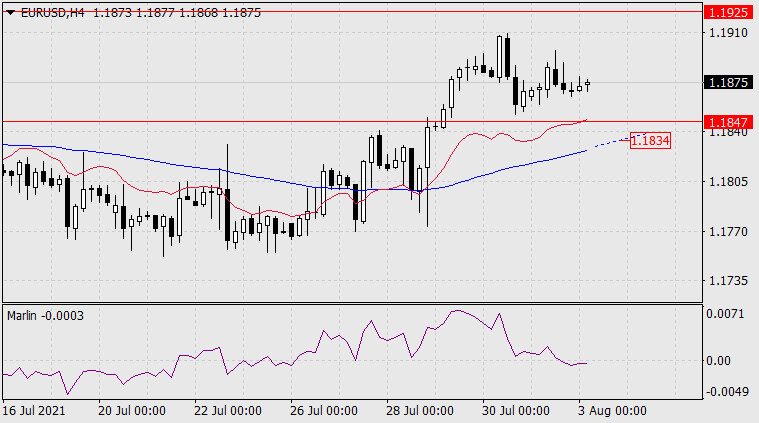 The Marlin Oscillator is moving sideways along the zero neutral line on the four-hour scale. The MACD line (1.1834) is below the level of 1.1847, so consolidating below the price level without settling below the MACD line will not be enough for a confident bearish signal.

Thus, the euro is in a neutral situation, investors went into standby mode. Although, if they still have an intention to take risks, then the unhurried growth of the euro may last until the very release of data on US employment. Doubt in the presence of such sentiments is caused by yesterday's drop in stock indices (S&P 500 -0.19%), however, this may just be a reaction to vague PMI.