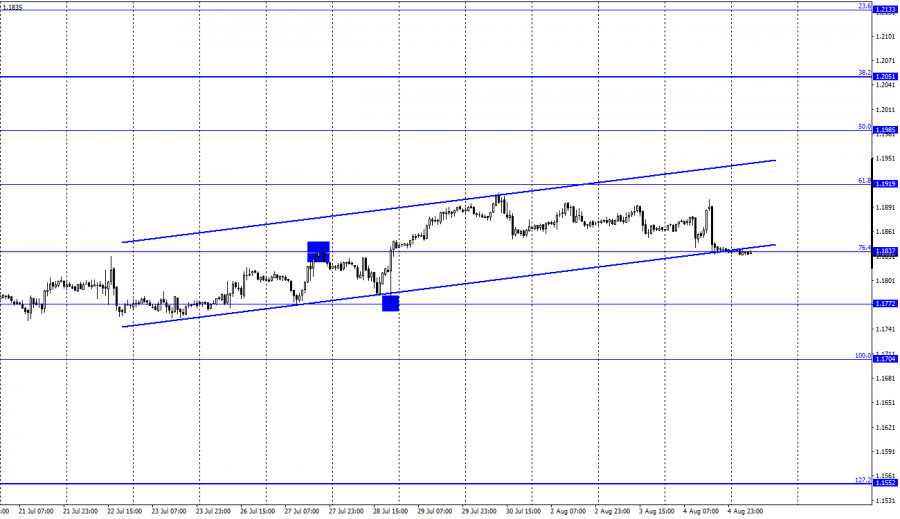 The EUR/USD pair yesterday performed a fall to the lower border of the upward trend corridor and fell even slightly below it. And also slightly below the corrective level of 76.4% (1.1837). I can't call this closing a "close," which is a signal for further sales of the pair. The quotes "crawled out" of the ascending corridor. Neither the rebound nor the breakthrough of the two lines mentioned above happened. Thus, I would not rush to sell the euro/dollar pair at this time. Nevertheless, the decline in quotes can be continued in the direction of the level of 1.1772. I also want to note that all yesterday's movements were somehow connected with the information background, which for once attracted the attention of traders, and also caused a rather violent reaction.

Let's start with the European reports. The business activity index in the services sector fell by 0.6 points in July, which led to a fall in the European currency yesterday. It was followed by a report on the change in the number of employed ADPs in America, which was worse than traders' expectations. Thus, the dollar performed a slight drop. The latest was the ISM business activity index in the services sector, which exceeded forecasts by as much as 4 points and caused strong purchases of the US currency, which led to a fall in the pair to the levels at which we see them now. Thus, almost all the reports of the past day were won back by traders, except for the report on retail sales in the EU, the value of which almost completely coincided with traders' expectations. In general, the ADP report was disappointing, which characterizes the state of the labor market in the United States as not strong enough, which pushes the completion of the QE program in the United States from the already long-term perspective. A much more important Nonfarm Payrolls report will be released on Friday. 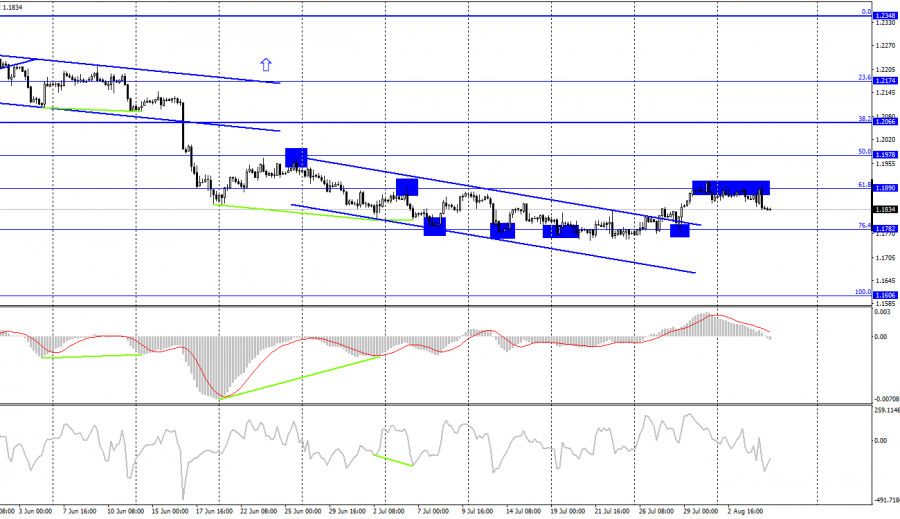 On the 4-hour chart, the pair's quotes performed an increase to the corrective level of 61.8% (1.1890). As a result, the rebound still happened. However, a new drop in quotes in the direction of the Fibo level of 76.4% (1.1782) is still very weak, and all the movements of the euro/dollar pair in recent weeks. Fixing the pair's exchange rate above the level of 61.8% will work in favor of the EU currency and the resumption of growth in the direction of the next corrective level of 50.0% (1.1978). There are no emerging divergences observed in any indicator.

US - number of initial applications for unemployment benefits (12:30 UTC).

On August 5, the calendars of economic events in the European Union and America contain one report for two. And the report on applications for unemployment benefits is far from the most important now when important data on the US labor market and business activity were released yesterday, and data on unemployment, wages, and Nonfarm will be released tomorrow. Thus, the information background will be practically absent today. 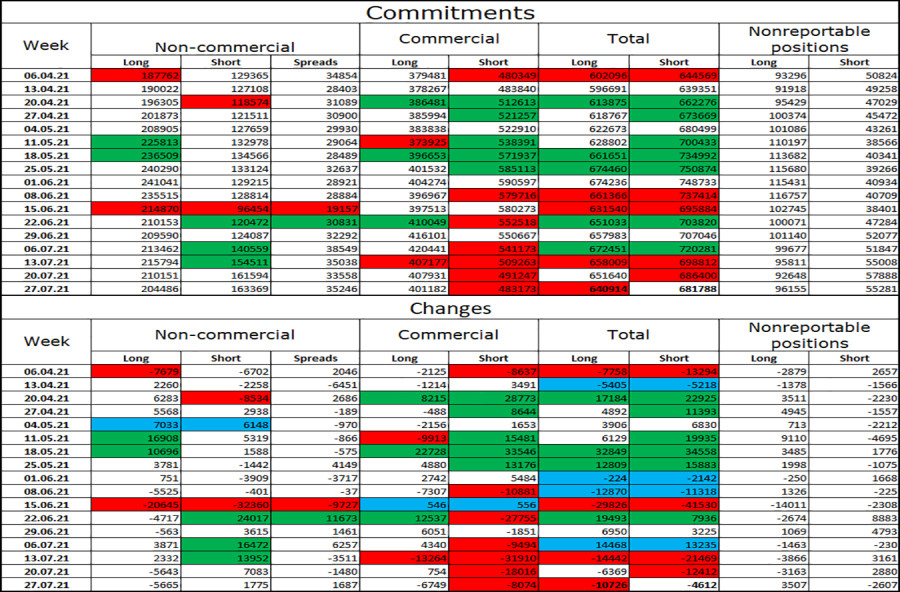 The latest COT report showed that during the last reporting week, the mood of the "Non-commercial" category of traders again became more "bearish." Major players opened 1,775 short contracts on the euro and closed 5,665 long contracts. Thus, in the last six weeks, the number of short contracts focused on the hands of speculators has increased by almost 70 thousand, and the number of long contracts has decreased by 11. Therefore, a further fall in the European currency is very likely, according to COT reports. However, over the past week, the euro/dollar pair has not been able to continue the decline in quotes and, on the contrary, has begun the growth process.

Today, I recommend new pair purchases with a target of 1.1919 on the hourly chart if the quotes remain inside the ascending corridor and fail to gain a foothold deeper than the level of 1.1837. For sales, I recommend waiting for a more confident closing under the ascending corridor and the level of 76.4% on the hourly chart with targets of 1.1772 and 1.1704.