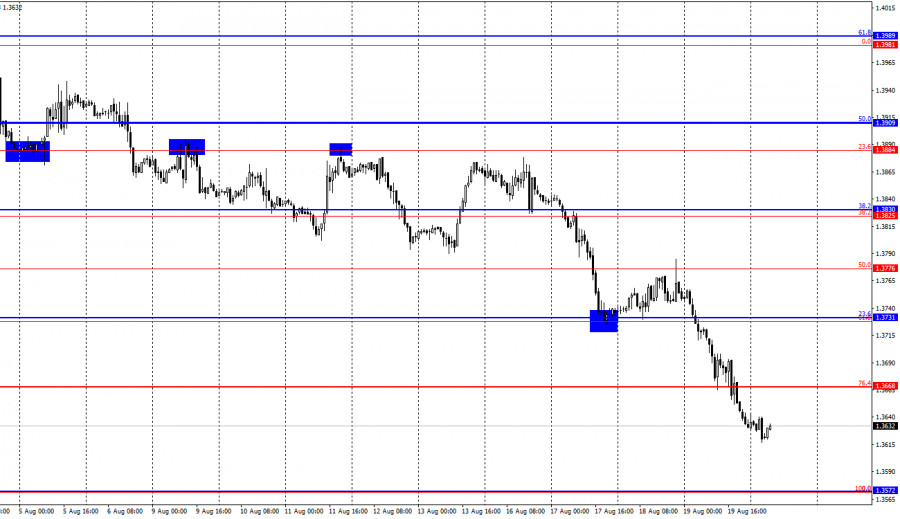 According to the hourly chart, the GBP/USD pair performed a rebound from the corrective level of 50.0% (1.3776) on the small Fibo grid (back on Wednesday) and has only been falling since then, having already closed under the levels of 23.6% (1.3731) and 76.4% (1.3668). Thus, the fall of the exchange rate can be continued in the direction of the corrective level of 100.0% (1.3572). In general, the British dollar has fallen impressively in the last four days. Although the euro also fell during the same period, the British dollar fell much more. Both the reasons and explanations for this are very difficult to find now. However, there are still a few assumptions. And the most likely of them is the report on inflation in the UK, which was released this week on Wednesday. Let me remind you that it came as a surprise to many that after weeks of talk and concerns about the growth of consumer prices, inflation in July fell from 2.5% y/y to 2.0% y/y.

Earlier, Andrew Bailey, Andy Haldane, and other economists and analysts have repeatedly stated that inflation in Britain could grow even stronger by the end of the year. Haldane insisted on completing the asset purchase program as soon as possible. However, as official statistics have shown, not everything is so bad in the Danish kingdom. At the moment, inflation has fallen to the target level. The Bank of England no longer has any grounds for curtailing the QE program as soon as possible. Thus, the solution of this issue may be postponed for several months, at least until October-November. Let me remind you that state programs to save jobs will cease to operate in the fall, and the unemployment rate may rise. Therefore, the BoE will probably wait for the autumn to see how inflation will continue to develop and the unemployment rate without state support. As the probability of tightening monetary policy by the Bank of England decreased, the British dollar was disappointed and had been declining for the fifth day in a row. 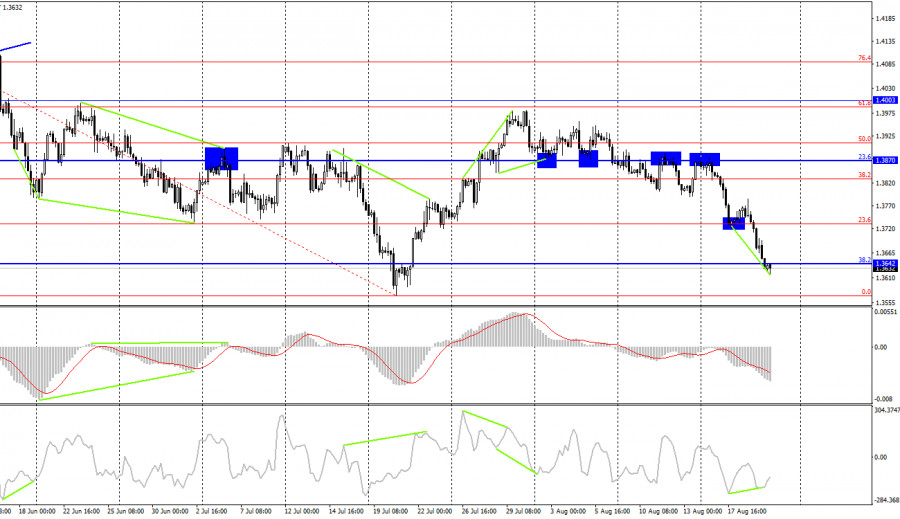 The GBP/USD pair on the 4-hour chart performed a fall to the corrective level of 38.2% (1.3642) on the senior Fibo grid and anchored under it. Thus, the process of falling quotes can be continued in the direction of the next level of 0.0% (1.3571) on the small Fibo grid. The bullish divergence formed by the CCI indicator allows traders to count on some growth. However, the breakdown of its last low will cancel it, and the fall will continue.

UK - changes in the volume of retail trade, including and excluding fuel costs (06:00 UTC).

On Friday, a rather interesting report on retail trade will be released in the UK, designed to stop the fall of the pound. However, the weakness of the report can only cause it to fall even more. In general, the information background during the day will be weak. 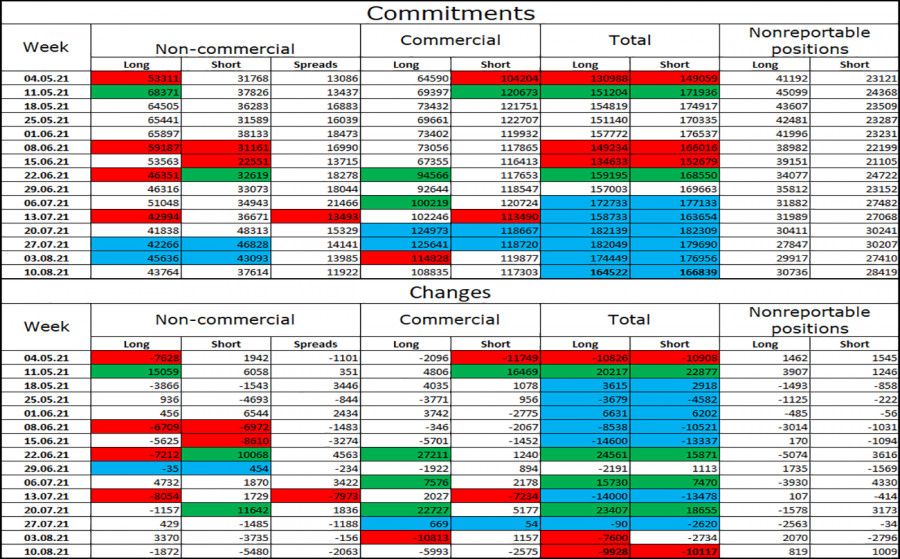 The latest COT report from August 10 on the British dollar showed that the mood of major players has changed to "bullish" and is now strengthening, as speculators closed 1,872 long contracts and 5,480 short contracts in the reporting week. Thus, the total number of long contracts on their hands exceeds the number of short contracts, and the gap between the categories increases. Such a change in the mood of the "Non-commercial" category of traders may mean that major players are not ready for further sales of the British dollar. The British currency has already begun to be in demand again among speculators. However, the bulls still do not have a strong advantage since the "Non-commercial" group has only 6 thousand more long contracts than short.