Forecast for the main cryptocurrency pairs

The cryptocurrency market starts with a local correction and subsequent recovery of quotes on Wednesday. Within the top ten, only the Solana token showed a strong increase of 10%. Basically, cryptocurrencies began to collapse, and it is worth highlighting the Cardano altcoin. This coin declined by 4% and dropped to fourth place in terms of capitalization, giving way to Tether. Market leaders are in a phase of consolidation and correction, but the situation of Bitcoin, in particular, has become more complicated. As a result of local market adjustments, total market capitalization fell by 5%, namely to $2 trillion.

Bitcoin ended Monday in an extremely unfavorable position, closing below the 200-day moving average at $ 44,600. As a result, the cryptocurrency is trying to keep the support zone at $ 45,000 on Wednesday. If the coin manages to stay above the area of $ 45,000 which now acts as a resistance line, then Bitcoin will consolidate and return to the local growth range. However, if BTC breaks through this level, it risks dropping to the support zone of $ 42.6 thousand. On the daily chart, Bitcoin is showing bearish sentiment, although bullish signals are still visible. The greatest disappointment is shown by the stochastic, which has peaked at zero. The MACD may well continue the course indicating price consolidation, and the RSI rises again to the level of 60. On the four-hour chart, the situation is even better and the main indicators indicate the possibility of growth to the resistance zone at $ 46.1 thousand. Taking into account the growth of social activity and the activation of unique addresses, it is possible to expect a rebound from the current zone. However, only in the case of a powerful buyer who will be able to implement a local bullish signal. 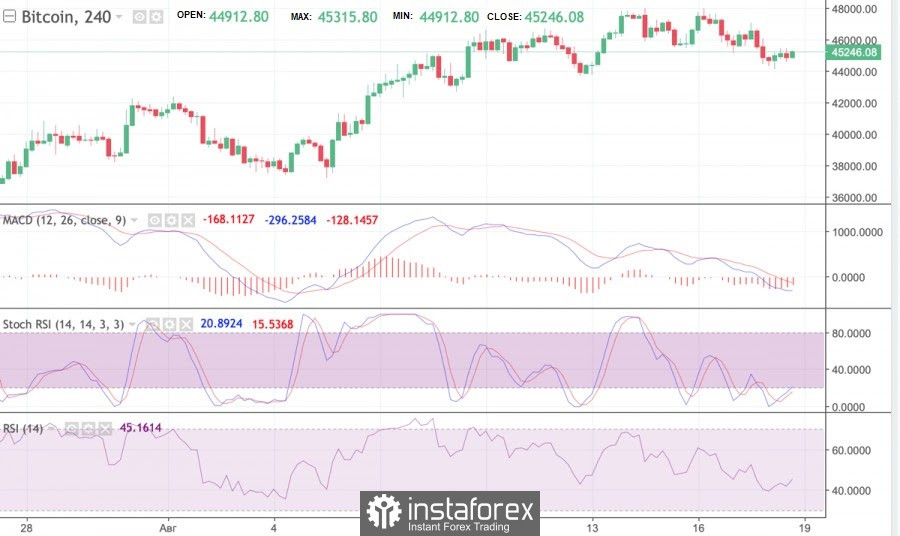 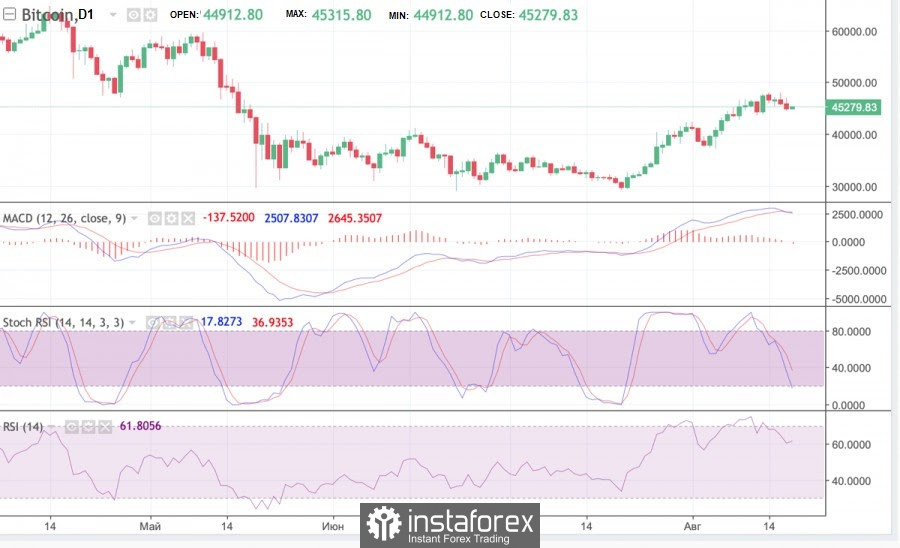 The main altcoin started the current trading day with a continuation of the downward movement for the local support zone at $3.2 k. As of 12:00 UTC +00, Ethereum is quoted around $3.1 thousand and has every chance to break through this level by the end of the day. Ethereum also ended the previous trading day below the zone that it held for two weeks. But unlike Bitcoin, ETH demonstrates a strong bullish impulse and the bulls eagerly buy volumes below $3,100. On the four-hour chart, the cryptocurrency shows bullish signals that can develop into a full-fledged rally above the $3,200. On the daily chart, the stochastic shows clear signals to weaken, while the RSI has returned to the 60th zone, and the MACD signals an upward movement. Given the formation of a clear upward dynamics of the price movement (+1.5%), the main altcoin has every chance to close above $3,200 and continue moving to $3.5 thousand. 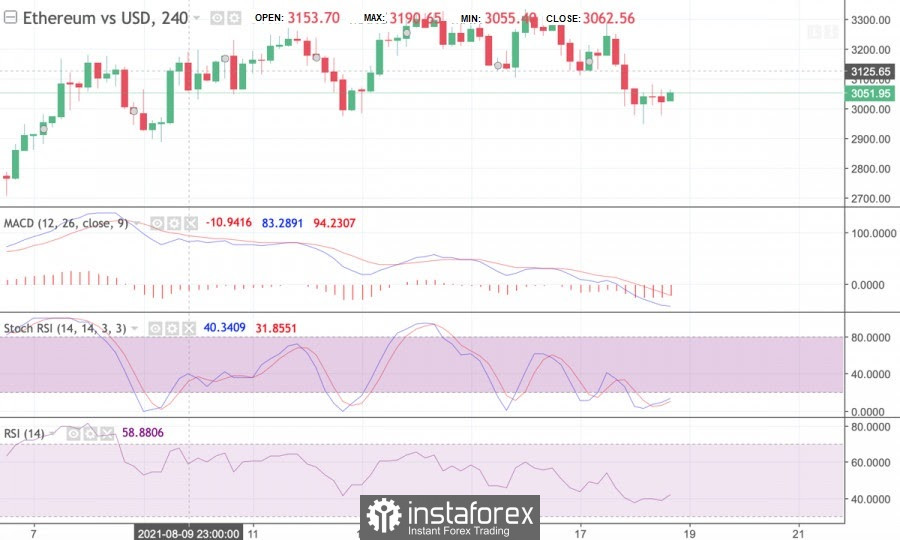 Cardano made a powerful breakthrough of three resistance lines, after which it broke through the $2 mark. However, the altcoin started Wednesday trading with a breakdown of the round mark. As of 14:00 UTC +00, ADA is quoted around the level of $2 and, judging by the dynamics of price movement (+1.5%), it will break through it this shortly. The current correction of the cryptocurrency is technical and is a component of the upward movement. In addition, an update in the altcoin network should take place soon, which will greatly strengthen the position of Cardano, which has become the main investment object for Wall Street investors. Despite the formation of a strong upward wave, ADA technical indicators indicate bearish signals on the four-hour chart. The MACD entered the red zone, and the RSI barely crossed the 40 mark. On the daily chart, the coin shows a clear bearish mood, which is supported by the fallen social activity of the altcoin. Considering this, the ADA may fall to the next support zone at $1.8 thousand, if buyers do not arrange a rebound to $2 on the current positions of the cryptocurrency. 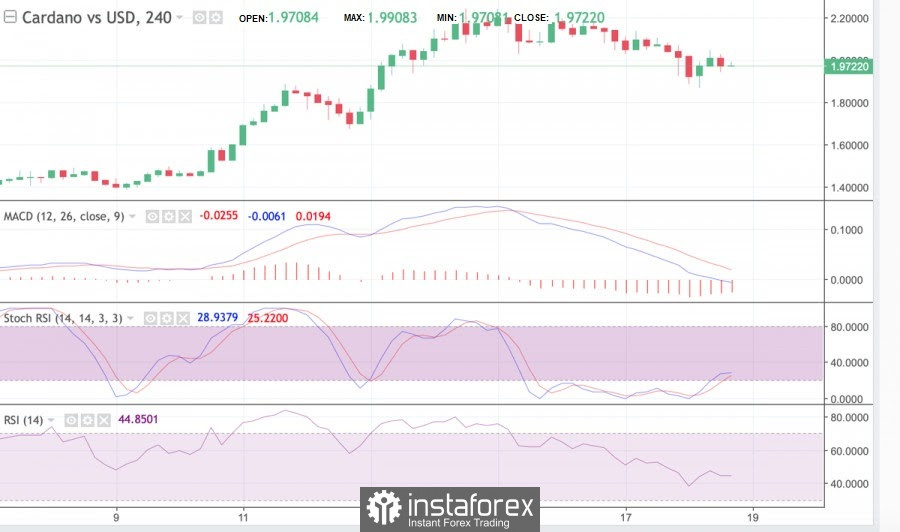 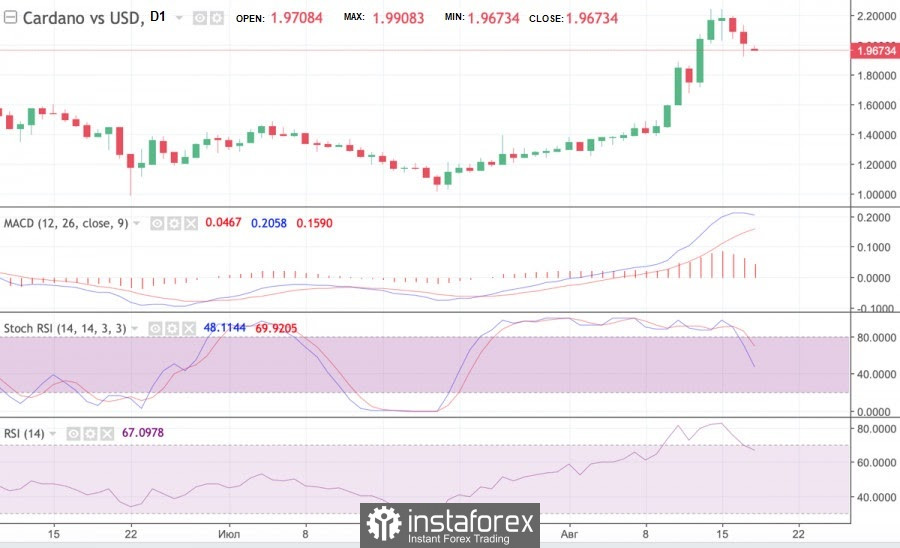 The Ripple token finished winning back the positive news and began to systematically pull back to the key support zone by $ 1 after reaching a local peak at around $ 1.3. Earlier, the coin is quoted at $ 1.096 and is gradually approaching the $ 1.0740 zone. If the asset manages to stay above the lower border of the weekly trading zone, then this may be a signal to buy and return to the level of $ 1.2. On the four-hour chart, the cryptocurrency is showing a bearish mood, as a result of which the development of a bearish wedge has begun. In case of its bearish breakout, the price will meet the next support zone at the $ 1 mark. Taking into account the daily dynamics of the price movement and the RSI and Stochastic indicators, a breakdown of $ 1.0740 and further movement to the key support zone at $ 1 is quite likely. At the same time, the token can take advantage of a local bullish signal and bounce back to $1.1 due to the general state of affairs in the market. However, the current indicators of the asset indicate a continuation of the downward movement to the $1 mark. 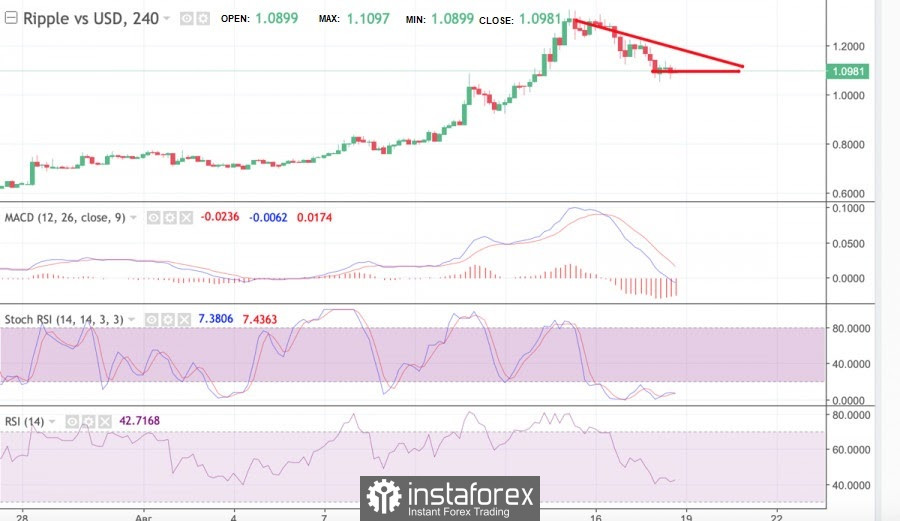 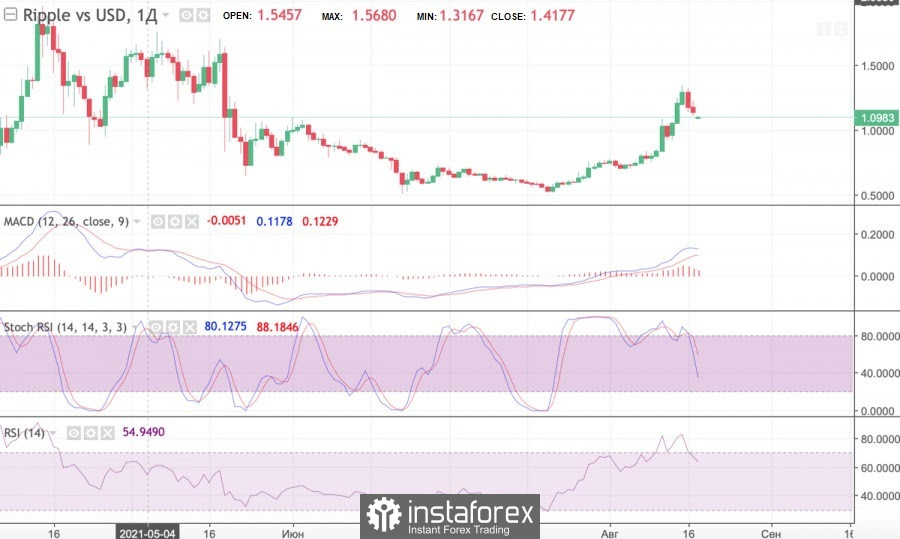