GBP/USD: plan for the European session on August 2. COT reports. Bulls took profit at the end of the month. Bulls need to

The downward movement of the British pound at the end of last month was quite expected. An unsuccessful attempt to break through the 1.3978 high led to the closure of a number of long positions by major players and to the pound's decline on Friday afternoon. Profit taking and the removal of a number of stop orders below 1.3933 also increased the pressure on the pair, which indicates the formation of a downward correction after a powerful bullish trend observed since the 20th of July. 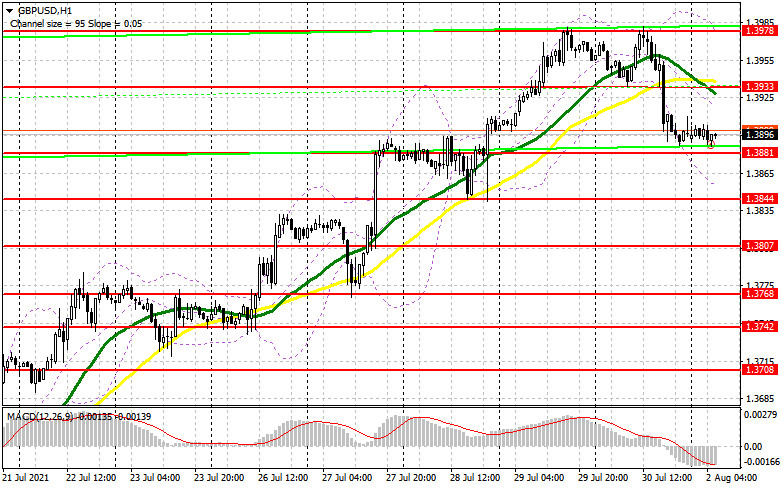 Today in the first half of the day, only the PMI for the manufacturing sector is released, which will remain at a fairly high level, which will help the bulls regain the market position, albeit only for a while. But before talking about a return to resistance at 1.3933, where the moving averages are playing on the side of the bears, the bulls need to think about protecting support at 1.3881, which is an intermediate level. Forming a false breakout there will be a signal to open long positions in hopes of the pair's recovery and the continuation of the upward trend. If the bulls are not active in the 1.3881 area, it is best to postpone long positions until the 1.3844 low has been updated, and I advise you to buy GBP/USD immediately on a rebound only from support at 1.3807 with the aim of an upward correction of 25-30 points within the day. If we see the pound rise after the report has been published in the first half of the day, then the bulls' focus will shift to the resistance at 1.3933. Its breakthrough with a reverse test from top to bottom creates a signal to open long positions in hopes of a return to last month's highs in the 1.3978 area. The next target is the resistance at 1.4019, the test of which will mean the continuation of the bull market for the pound.

The initial task of the bears is to protect the resistance at 1.3933. Considering that there are moving averages, and there is a downward correction in the market, it will not be so difficult to do this. Forming a false breakout there will return temporary pressure to the pound, which will create the first signal to open short positions in hopes that the pair would fall to support at 1.3881. A breakdown of this level will depend on the data on manufacturing activity in the UK, which may disappoint traders. The test of 1.3881 from the bottom up will hit the stop orders of the bulls, which will push the pound even lower to the next support at 1.3844 where it is worth considering taking profit. The next target is the area of 1.3807. If the bears are not active in the 1.3933 area, I advise you to postpone short positions until the next major resistance at 1.3978, or open short positions in GBP/USD immediately after a rebound from 1.4019, counting on a downward correction of 25-30 points within the day.

The Commitment of Traders (COT) report for July 20 recorded a slight reduction in long positions and a good rise in short ones. Despite the large fall in the pound, as we can see on the chart, the downward movement was quickly won back at the end of last week, but this report does not take this into account, therefore it seems that the pound was completely under the control of bears, but this is not the case. The panic after the lifting of all quarantine restrictions in the UK and the full opening of the economy occurred at a time when, after all this, a sharp increase in infections with a new strain of coronavirus began in England, and politicians argued with each other about how to respond to this. But then, by the middle of the week, the situation stabilized, and the pound managed to recover all its losses against the US dollar. Traders still expect Bank of England officials to start talking more about plans to cut back on the bond buying program soon. I have repeatedly drawn attention to the fact that traders pay special attention and take an interest in every major fall in GBP/USD downward, as sooner or later the central bank will talk about curtailing support measures for the economy, which will have a positive impact on the British pound and lead to its growth. But as long as there has not been a serious departure from the inflation target in the UK, the Bank of England is unlikely to rush to make changes to its policy. Despite this, the best scenario is to buy the pound for every good decline against the US dollar. The COT report indicated that long non-commercial positions declined from 44,686 to 44,223, while short non-commercial positions rose from 36,717 to 47,720. As a result, the non-commercial net position turned negative at -3,496. against 7,969. Last week's closing price fell from 1.3886 to 1.3668

Trading is carried out below 30 and 50 moving averages, which indicates the possibility of a continuation of the pair's downward correction.

Interesting? Write a comment below.
 GBP/USD: plan for the European session on August 2. COT reports. Bulls took profit at the end of the month. Bulls need to
Forward 
Backward 