GBP/USD: plan for the European session on August 10. COT reports. Bears maintain pressure on the pound, but there are no

Yesterday there was only one signal to open short positions in the British pound in the first half of the day, which was fully realized only during the US session. Let's take a look at the 5 minute chart and talk about what happened. The clearly short-term bear market led to the formation of a false breakout in the resistance area of 1.3878, and the test of this level from the bottom up confirmed an excellent entry point for short positions. As a result, the downward movement amounted to about 25 points, but we did not reach the target in the area of 1.3846. It was possible to achieve a test of this level and update the weekly lows only in the second half of the day, which kept the pressure on the pound, as well as the prospect of its further decline in tandem with the US dollar.

Before examining the technical picture of the pound, let's take a look at what happened in the futures market. The Commitment of Traders (COT) reports for August 3 showed a reduction in short positions, and a sharp rise in long ones. All this is explained by the results of the Bank of England meeting, where representatives again started talking that in the near future the attitude to monetary policy will change towards tightening. This brought back the demand for the British pound that slept all week, which made it possible to change the balance of power in the net position. The panic after the lifting of all quarantine restrictions in the UK has also receded, which allows the economy to continue to breathe deeply. There is little pressure on the pound right now, but it is mainly due to the strong performance in the US economy and labor market. However, I advise you to stick to the strategy of buying the pound every time it significantly drops, as the big players do. The COT report indicated that long non-commercial positions rose 41,194 to 43,119, while short non-commercial positions fell from 46,878 to 43,205, indicating continued buying from major players. As a result, the non-commercial net position remained negative and amounted to -86 against -5,684 a week earlier. Last week's closing price jumped from 1.3826 to 1.3891.

Important fundamental statistics will not be released today, only the placement of 10-year bonds, which will take place in the first half of the day, so the pressure on the British pound is expected to continue in the short term. Bulls need to think about how to protect the new support at 1.3824, to which the pair is gradually declining. Only the formation of a false breakout there will lead to a signal to open long positions as opposed to a downward trend in hopes that the pair would recover and reach resistance at 1.3877, where the moving averages play on the bears' side are. Only a breakthrough and reverse test of this level from top to bottom will generate another buy signal, which will push the pound even higher - to the high of 1.3925, where I recommend taking profits. The next target will still be resistance at 1.3978, which coincides with the previous month's local highs. If the pressure on the pair returns in the morning, do not rush to buy around 1.3824. The optimal scenario will be long positions from the next support at 1.3783, but only if a false breakout is formed. I advise you to watch buying GBP/USD immediately for a rebound only from a low like 1.3742, counting on an upward correction of 25-30 points within the day.

So far, the bears are coping with the tasks assigned to them and each time they seek to update the daily lows, which keeps the downward trend for the pair. Today's absence of important fundamental statistics may weaken the positions of the bulls. The bears' first task is to control the support level of 1.3824. A breakthrough of this area and its reverse test from the bottom up will generate a signal to open short positions with the expectation of a decline to the level of 1.3783. A breakthrough of this range, as well as a test of it from the bottom up, creates another signal to sell GBP/USD, which aims to break the stop orders of the bulls and a larger fall to the area of the low of 1.3742, where I recommend taking profits. If the pound rises in the first half of the day, only the formation of a false breakout in the resistance area of 1.3877, where the moving averages are temporarily playing on the bears' side, will be a signal to sell GBP/USD. I advise you to open short positions in the pound immediately on a rebound from a larger resistance in the area of 1.3925, or even higher - from a high like 1.3978, counting on the pair's rebound down by 20-25 points within the day. 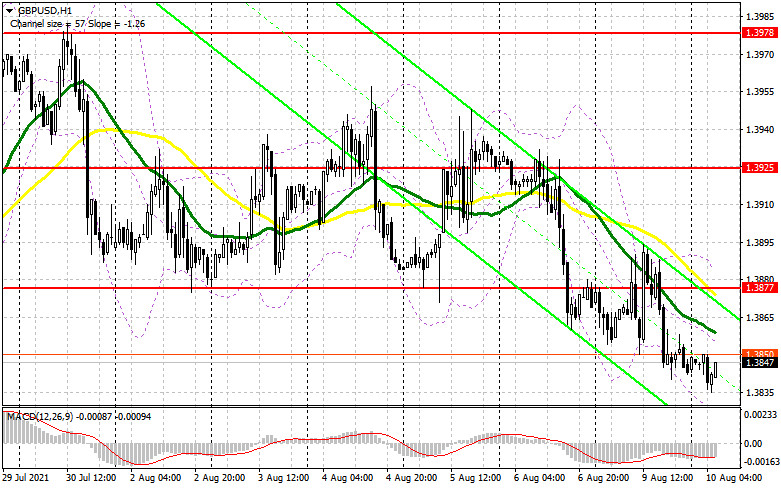 Trading is carried out below 30 and 50 moving averages, which indicates a decline in the pair in the short term.

A breakthrough of the upper border of the indicator in the area of 1.3877 will lead to a new wave of growth of the pound. Surpassing the lower boundary at 1.3824 will increase the pressure on the pair.

Interesting? Write a comment below.
 but there are no, GBP/USD: plan for the European session on August 10. COT reports. Bears maintain pressure on the pound
Forward 
Backward 