GBP/USD: plan for the European session on August 13. COT reports. Pound fell to new weekly lows, which turned the market

The British pound did not react much to the UK GDP data and continued to push in a narrow horizontal channel in the first half of the day. The US session was more interesting. Let's take a look at the 5-minute chart and talk about what happened. Falling to the level of 1.3847 and the formation of a false breakout there resulted in creating an excellent entry point into long positions in continuation of the upward trend observed the day before - everything was just perfect. But the bears' plans turned out to be different: a breakthrough and then a reverse test of the 1.3847 level from the bottom up created an excellent entry point in short positions, which caused the pound to fall to support 1.3812 and also makes it possible to take about 35 points from the market.

Today's economic calendar for the UK is empty, so the emphasis will be on the afternoon, where activity on the pair will increase after the release of data on the US economy. In the meantime, the bulls need to focus on protecting the first support level at 1.3796, which was formed at the end of yesterday. Forming a false breakout there will help keep the GBP/USD from a new wave of decline, which generates a signal to open long positions with the aim of an upward correction to the resistance of 1.3832, where the moving averages play on the side of the pound bears are. The breakthrough and the downward test of 1.3832 will create another signal to buy the pound, counting on a return to 1.3854. The next target is yesterday's high at 1.3877, where I recommend taking profits. If the pressure on the pound returns, and the bulls show nothing in the support area at 1.3796, the optimal scenario will be buying from the next low at 1.3768, but only after a false breakout is formed. Or you can buy immediately on a rebound in the 1.3742 area, counting on an upward correction of 15-20 points within the day. 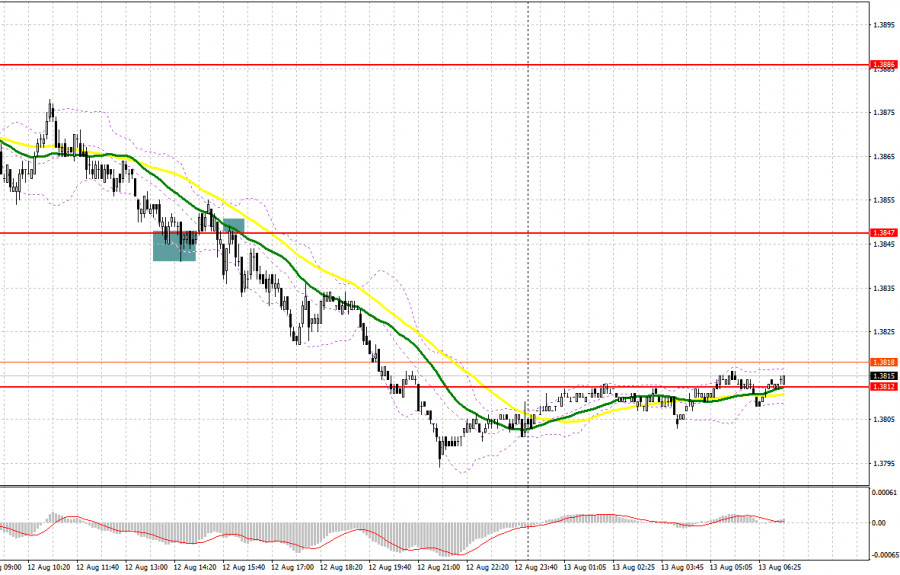 The initial task of the bears is to protect the resistance at 1.3832, above which the moving averages, playing on their side, pass. Taking into account that there is a downward trend in the market, the optimal scenario for opening short positions will be a false breakout at 1.3832, which will return pressure to the pound and generate a signal to open short positions in order to pull down the pair to a new low like 1.3796. A breakdown of this level with a reverse test from the bottom up will push GBP/USD even lower - to 1.3768, and then to 1.3742, where I recommend taking profits. The next target will be the July 23 low at 1.3721. If the bears are not active around 1.3832, I advise you to postpone selling until the next major resistance at 1.3854. I also recommend opening short positions from there only if a false breakout is formed. Selling GBP/USD immediately on a rebound is possible from the local high in the 1.3877 area, counting on a downward correction of 25-30 points within the day. 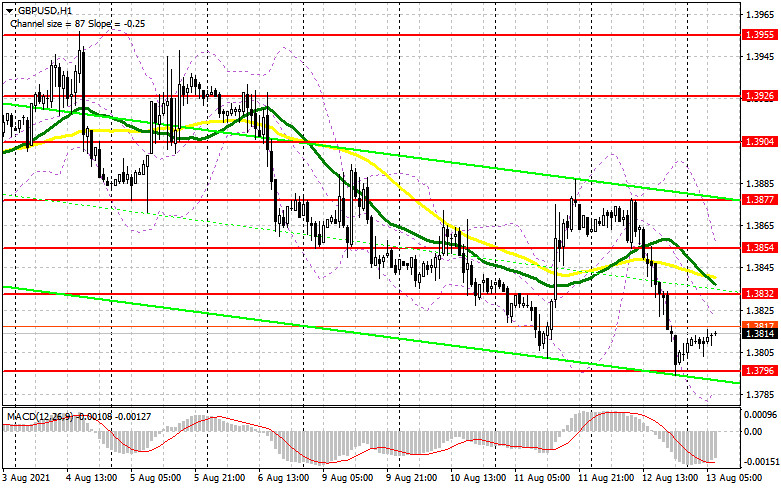 The Commitment of Traders (COT) reports for August 3 showed a reduction in short positions, and a sharp rise in long ones. All this is explained by the results of the Bank of England meeting, where representatives again started talking that in the near future the attitude to monetary policy will change towards tightening. This brought back the demand for the British pound that slept all week, which made it possible to change the balance of power in the net position. The panic after the lifting of all quarantine restrictions in the UK has also receded, which allows the economy to continue to breathe deeply. There is little pressure on the pound right now, but it is mainly due to the strong performance in the US economy and labor market. However, I advise you to stick to the strategy of buying the pound every time it significantly drops, as the big players do. The COT report indicated that long non-commercial positions rose 41,194 to 43,119, while short non-commercial positions fell from 46,878 to 43,205, indicating continued buying from major players. As a result, the non-commercial net position remained negative and amounted to -86 against -5,684 a week earlier. Last week's closing price jumped from 1.3826 to 1.3891.

Trading is carried out below 30 and 50 moving averages, which indicates a bearish nature of the market in the short term.