GBP/USD: plan for the European session on August 19. COT reports. Pound continues to hit monthly lows and aims to surpass

Trading the British pound yesterday was extremely unpleasant: either the price fell short of reaching a good support level by a couple of points, then it "smeared" the immediate resistance, not making it possible to get clear guidelines for entering the market. Let's take a look at the 5-minute chart and break down the entry points. In my morning forecast, I drew attention to support 1.3729 and recommended it to make decisions on entering the market. Weak data on inflation in the UK put pressure on the British pound, after which the pair fell to the support area of 1.3729, where I advised to buy the pound. However, before the formation of a false breakout, literally a couple of points were not enough, and therefore I missed the entry point to long positions and the entire next upward correction after it. In the second half of the day, there was an active struggle for the level of 1.3762, where a false breakout was formed, although it resulted in creating an entry point for short positions, and we did not manage to wait for a good decline from the pound. After the publication of the Federal Reserve minutes, the market began to behave rather strangely and impulsively, which eventually led to the demolition of stop orders of speculative sellers and to the pound's succeeding decline. Yesterday's Fed minutes said that central bank officials generally concluded that they had met their inflation target but still needed to meet their labor market targets. The opinions of the committee members on the topic of when and to what extent to cut the bond purchase program were very divided, but they all firmly believe that this should be done by the end of this year, or at most - at the beginning of next.

Today there are no fundamental statistics for the UK at all, so the market will remain in the hands of the bears. I do not recommend rushing with long positions against the trend even in the area of new lows. The optimal scenario will be long positions from the level of 1.3706, but only if a false breakout is formed there, which generates a signal to buy GBP/USD with the aim of an upward correction to resistance at 1.3747, where the moving averages are located on the side of the bears, which will limit the pair's upward potential. The breakthrough and the test of 1.3747 from top to bottom creates another signal to buy GBP/USD counting on a return to 1.3782, where the upper border of the new descending channel passes. The next target is still the 1.3810 high - I recommend taking profit there. If the pressure on the pound persists during the European session, and the bulls show nothing in the support area at 1.3706, the optimal scenario will be buying from a new low like 1.3672, but only after a false breakout is formed. It is possible to buy GBP/USD immediately on a rebound around 1.3636, counting on an upward correction of 15-20 points within the day. 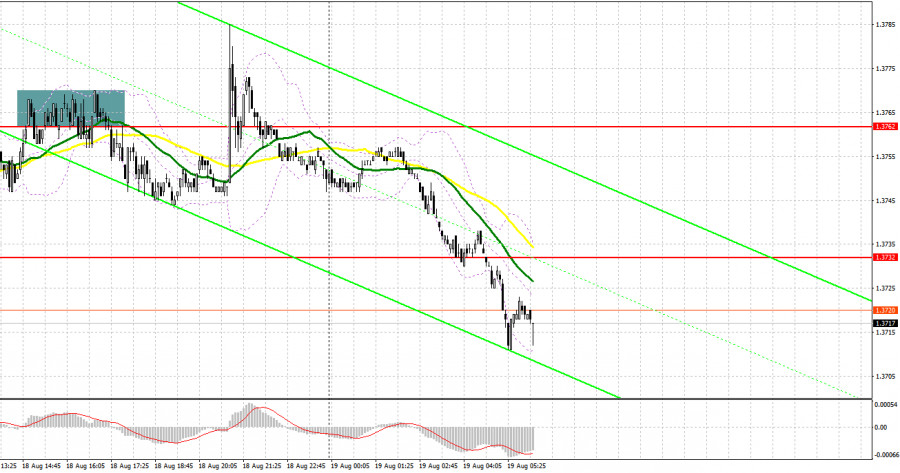 The initial task of the bears is to protect the resistance at 1.3747, above which the moving averages pass, indicating the formation of a new downward trend. The optimal scenario for opening short positions is to form a false breakout at this level, which will weaken the pound's position even more. In this case, the target will be support at 1.3706 - this is another passing low, so it is unlikely that an active struggle will be waged for it. A breakthrough and a test of this area from the bottom up will create an additional entry point into short positions and will push GBP/USD even lower - to 1.3672, and there it is close to the 1.3636 low, where I recommend taking profits. If the bears are not active around 1.3747, I advise you to postpone selling until the next major resistance at 1.3782, where the upper border of the new descending channel is already passing. I also recommend opening short positions from there only if a false breakout is formed. Selling GBP/USD immediately on a rebound is possible from the local high in the 1.3810 area, counting on a downward correction of 25-30 points within the day. 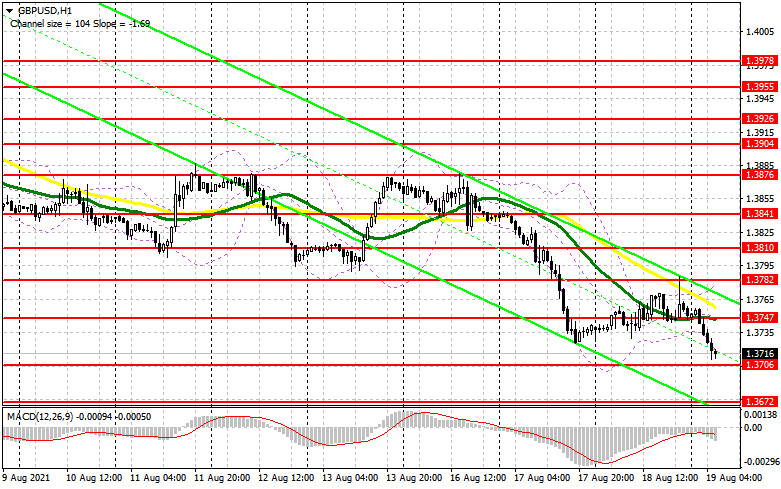 The Commitment of Traders (COT) reports for August 10 showed that short positions have been reduced, while long ones sharply rose. All this is explained by the results of the Bank of England meeting, where representatives once again mentioned that in the near future the attitude to monetary policy will change towards tightening. Also, additional pressure on the pound was exerted by the US inflation report, which disappointed investors and coincided with the forecasts of economists. This suggests that the Federal Reserve will clearly not rush to make changes in its monetary policy, especially against the backdrop of the emergence of another problem - supply chain disruptions in the South Asian region. All this can seriously affect pricing, as well as the economic recovery of a number of countries, including the UK. However, as before, I advise you to stick to the strategy of buying the pound with every significant decline, as the big players do. The COT report indicated that long non-commercial positions rose from 43,119 to 44,750, while short non-commercial positions fell from 43,205 to 37,680, indicating continued buying from major players. As a result, the non-commercial net position returned to the positive side and reached 7070, against -86 a week earlier. Last week's closing price dropped from 1.3891 to 1.3846.

Trading is carried out below 30 and 50 moving averages, which indicates a bearish nature of the market.

If the pair grows, the average border of the indicator in the area of 1.3747 will act as a resistance.