GBP/USD: plan for the European session on August 25. COT reports. Pound locked itself in a horizontal channel. Bulls are

Several sell signals were formed for the pound yesterday. Even in my morning forecast, I drew attention to the level of 1.3737 and to the divergence that loomed on the MACD indicator. Let's take a look at the 5 minute chart and see what happened. The stars converged - failure to settle above 1.3737 and the inability of the MACD indicator to renew yesterday's highs - all this resulted in forming a false breakout and an excellent entry point for short positions. As a result, the pair dropped to support 1.3691, which was literally 2-3 points short of the test. A similar story happened in the second half of the day, but with a new resistance level at 1.3743. Another unsuccessful attempt by the bulls to rise above the weekly highs resulted in creating a sell signal and the pound fell by 30 points.

Today we do not have important fundamental statistics for the UK, and also there are no speeches by representatives of the Bank of England. Therefore, we can assume that trading will mainly be carried out in the horizontal channel for the first half of the day, however, the bulls will not give up hope for a breakout and consolidation above resistance at 1.3728. Only a test of this level from top to bottom can create a good entry point into long positions with the aim of entering a new high of 1.3756, with the prospect of updating 1.3782, where I recommend taking profits. The next target will be the 1.3810 level, but it is still too early to talk about it. Considering the fact that trading is carried out in the area of moving averages, we can talk about a pause in the upward trend. Therefore, in case GBP/USD falls in the first half of the day, the optimal scenario will be long positions from the level of 1.3696, but only if a false breakout is formed there. This is the only scenario that generates a signal to buy GBP/USD in order to continue the upward correction. If the pressure on the pound persists, and the bulls are not active in the support area of 1.3696, the optimal scenario will be long positions from a new low like 1.3662, but only after forming a false breakout. It is possible to buy GBP/USD immediately on a rebound in the area of 1.3634, or even lower - from the level of 1.3603, counting on an upward correction of 15-20 points within the day. 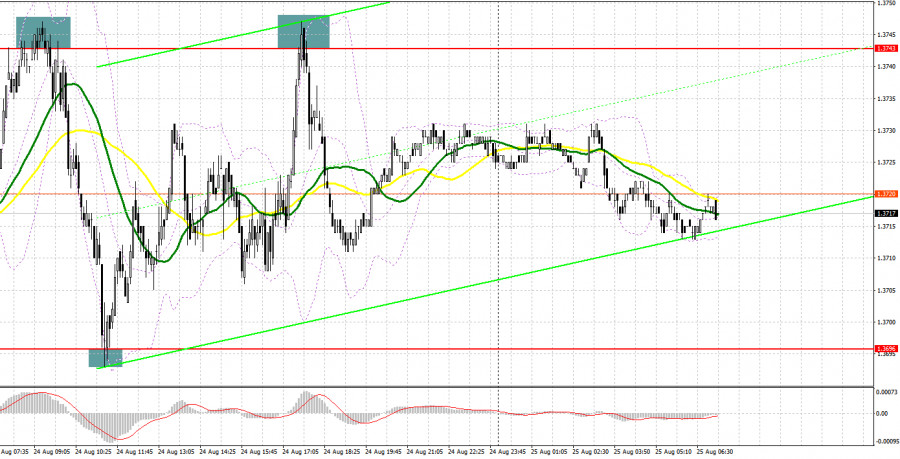 The bears' initial task is to protect the resistance at 1.3728, which was formed on the basis of yesterday's results. The optimal scenario for opening short positions will be the formation of a false breakout at this level, which will weaken the pound's position even more. In this case, the target will be support at 1.3696 - this is yesterday's low, so its breakdown can result in removing a number of the bulls' stop orders and return the pressure on the pair. A breakout and test of this area from the bottom up will form another entry point into short positions and will push GBP/USD even lower - to 1.3662, and there it is close to the low - 1.3634, where I recommend taking profits. If the bears are not active around 1.3728, I advise you to postpone selling until the next major resistance at 1.3756, which may become a new weekly high. I also recommend opening short positions from there only if a false breakout is formed. Selling GBP/USD immediately on a rebound is possible from the local high in the 1.3782 area, counting on a downward correction of 25-30 points within the day. 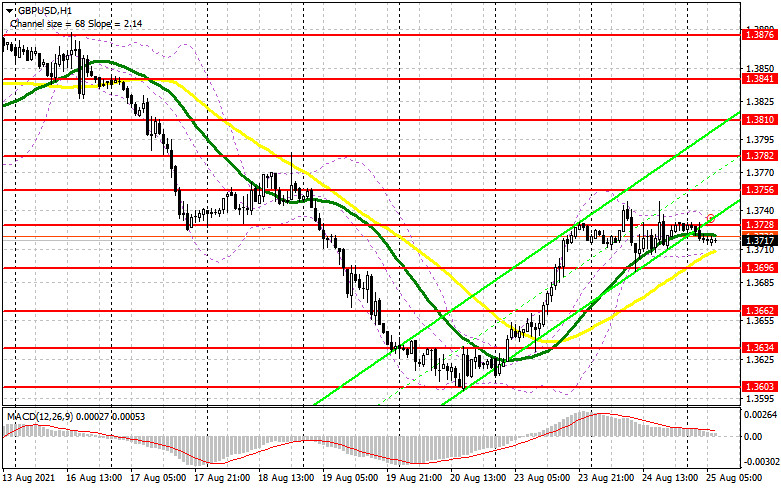 Interesting? Write a comment below.
 GBP/USD: plan for the European session on August 25. COT reports. Pound locked itself in a horizontal channel. Bulls are
Forward 
Backward 