GBP/USD: plan for the European session on August 27. COT reports. British pound fell back. Bears are looking for a breakdown

Several signals to enter the market were formed yesterday. Let's take a look at the 5 minute chart and break down the trades. In my morning forecast, I paid attention to the 1.3732 level and recommended making decisions on entry from it. It is clearly seen how the bulls are protecting the support at 1.3732 and forming a false breakout there with a signal to open long positions in continuation of the upward trend. But despite the good entry point, the bulls did not manage to continue the upward trend, and after rising by 15 points, the pressure on the pound returned at the beginning of the US session. A breakthrough of 1.3732 and a reverse test from the bottom up created an excellent sell signal, after which the GBP/USD fell 35 points down to support 1.3697.

Today we still do not have any important fundamental statistics on the UK - there are no speeches by representatives of the Bank of England. Therefore, we can assume that trading will be based on US fundamental reports and on the speech of Federal Reserve Chairman Jerome Powell in Jackson Hall. As for the technical picture of GBP/USD, the bulls need to be as active as possible, as they risk losing all the initiative received at the beginning of this week. The emphasis is on regaining control of the resistance at 1.3724, in the area of which the moving averages, playing on the side of the bears, pass. Only a test of this level from top to bottom can create a good entry point into long positions in hopes of reaching a high like 1.3765, with the prospect of updating 1.3801, where I recommend taking profits. The 1.3841 area is still a target, the renewal of which will cancel out all the bears' plans to return the downward trend. However, growth to this level will directly depend on Powell's statements. In case GBP/USD falls in the first half of the day, the optimal scenario will be long positions from the level of 1.3682, but only if a false breakout is formed there. If the pressure on the pound persists, and the bulls are not active in the support area of 1.3682, the optimal scenario will be long positions from a new low like 1.3645, but also only after forming a false breakout. It is possible to buy GBP/USD immediately on a rebound around 1.3603, counting on an upward correction of 15-20 points within the day. 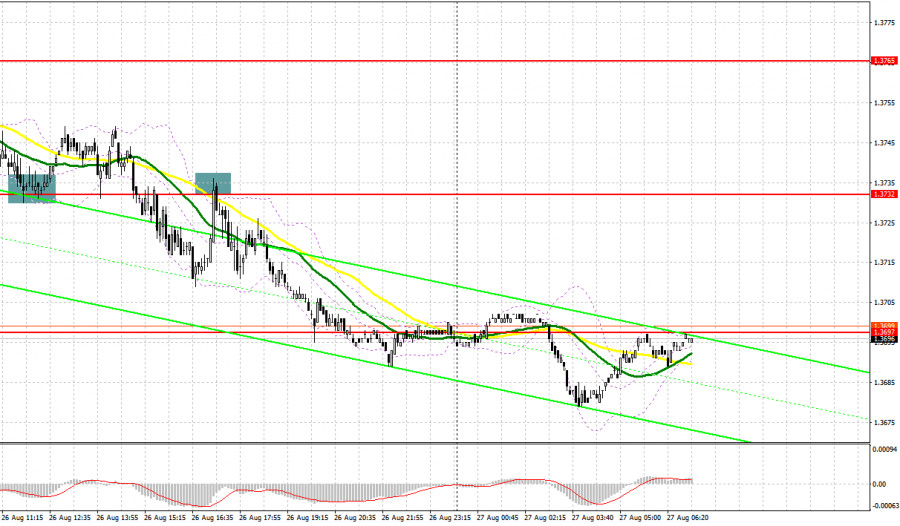 The bears' initial task is to protect the resistance at 1.3724, which was formed at the end of yesterday and where the moving averages are, playing on the side of the bears. The optimal scenario for opening short positions will be the formation of a false breakout at this level, which will weaken the pound's position and push the pair to the Asian support of 1.3682. A breakthrough and test of this area from the bottom up will form another entry point into short positions and will push GBP/USD even lower - to 1.3645, and there it is close to the month's low at 1.3603, where I recommend taking profits. If the bears are not active around 1.3724, I advise you to postpone selling until the next major resistance at 1.3765. I also recommend opening short positions from there only if a false breakout is formed. Selling GBP/USD immediately on a rebound is possible from a new weekly high in the 1.3801 area, counting on a downward correction of 25-30 points within the day. 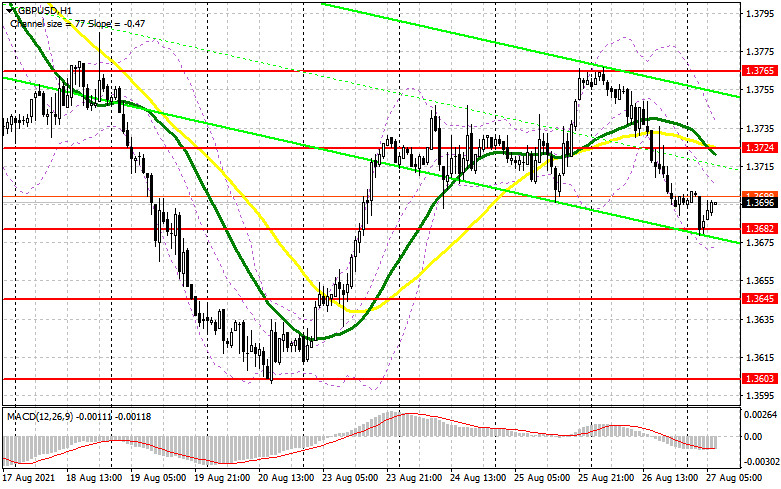 Trading is carried out below 30 and 50 moving averages, which indicates renewed pressure on the pound.

Interesting? Write a comment below.
 GBP/USD: plan for the European session on August 27. COT reports. British pound fell back. Bears are looking for a breakdown
Forward 
Backward 