GBP/USD: plan for the European session on August 3. COT reports. Pound did not force events before Bank of England meeting

Yesterday was a rather volatile day, but only one signal to enter the market was formed. Let's take a look at the 5 minute chart and talk about what happened. Unfortunately, just a couple of points was not enough to form a false breakout in the resistance area of 1.3933, the rise to which occurred immediately after the release of data on the PMI in the UK manufacturing sector. We never made it to the other levels I indicated in the first half of the day. During the US session, the bulls found strength and defended support at 1.3888, forming a false breakout there and, accordingly, a signal to open long positions. The upward movement was about 30 points and the bulls' initiative dried up. There were no other signals to enter the market.

Before examining the technical picture of the pound, let's take a look at what happened in the futures market. The Commitment of Traders (COT) reports for July 27 showed that long positions decreased, but sellers also did not insist and partially reduced their position volume. The pound's growth throughout the week allowed the GBPUSD pair to return to monthly highs, but failed to settle above. The panic after the lifting of all quarantine restrictions in the UK has receded and now the main focus this week will be on the Bank of England (BoE) meeting on monetary policy. The European Central Bank and the Federal Reserve did not change anything. Most likely, the BoE will do the same. Before abandoning stimulus measures, members of the BoE committee will probably wait for accurate data on how things are in the labor market. It is expected that a large-scale government program to support the labor market will be completed in September this year, which may force the central bank to take a longer wait-and-see attitude, since the central bank has not yet experienced any particular problems with inflationary pressure. If the representatives of the BoE start talking more and more about plans to reduce the bond purchase program, this will provide significant support to the pound. I advise you to stick to the strategy of buying the pair every time it drops significantly, as the major players do. The COT report indicated that long non-commercial positions fell from 44,223 to 41,194, while short non-commercial positions fell from 47,720 to 46,878, indicating a cautious approach to selling at current highs. As a result, the non-commercial net position remained negative and amounted to -5,684 against -3,496 a week earlier. Last week's closing price jumped from 1.3668 to 1.3826. 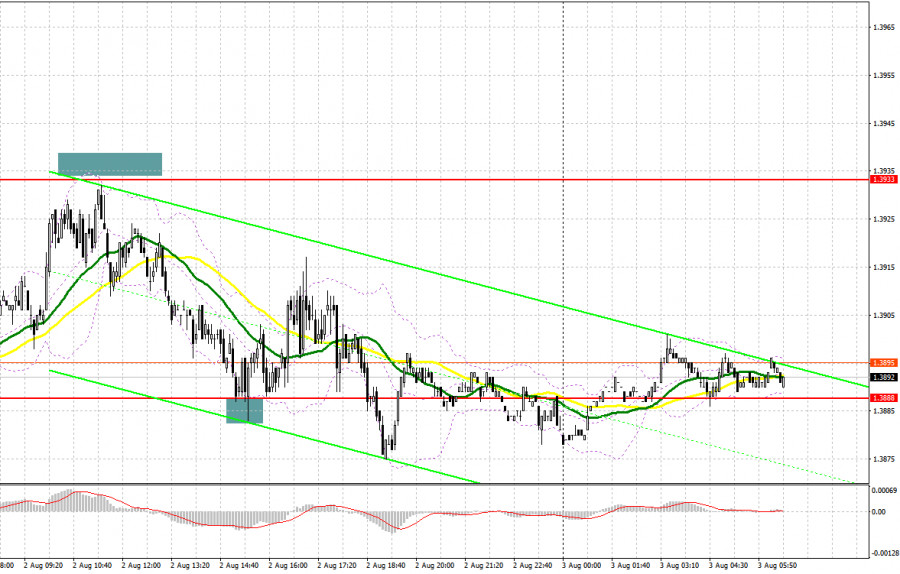 Today there are no important fundamental statistics in the morning, so the pressure on the British pound is expected to persist in the short term. The bulls need to think further about how to protect the support at 1.3877 that was formed at the end of yesterday. Only the formation of a false breakout there will lead to a signal to open long positions with the expectation of a further recovery of the pair to resistance at 1.3914, above which a road opens to a larger area of 1.3951, where I recommend taking profits. A breakthrough and consolidation at this range, followed by its test from top to bottom, creates another signal to open long positions in hopes of a recovery to the last month's high of -1.3988. If the pressure on the pair returns in the morning, do not rush to buy around 1.3877. The optimal scenario will be long positions from the next support at 1.3844, but only if a false breakout is formed. I advise you to watch buying GBP/USD immediately for a rebound only from a low like 1.3807, counting on an upward correction of 25-30 points within the day.

The bears are still coping with the tasks set for them and are not letting the pound go to last month's highs, which leaves hope for a further downward correction of the pair. The absence of important fundamental statistics today may weaken the bulls' positions. The top priority for the bears is to regain control over the support level of 1.3877. A breakthrough of this area and its reverse test from the bottom up will generate a signal to open short positions in hopes of a downward correction and a decline to the level of 1.3844. Only a breakthrough of this range and another reverse test from the bottom up can create another sell signal that aims to remove the bulls' stop orders and a larger fall in GBP/USD to the area of a low like 1.3807, where I recommend taking profits. In case the pound grows in the first half of the day, only a false breakout in the resistance area of 1.3914, where the moving averages are temporarily playing on the bears' side, will be a signal to sell GBP/USD. I advise you to open short positions in the pound immediately on a rebound from a larger resistance in the area of 1.3951, or even higher - from a high of 1.3988, counting on the pair's rebound down by 20-25 points within the day. 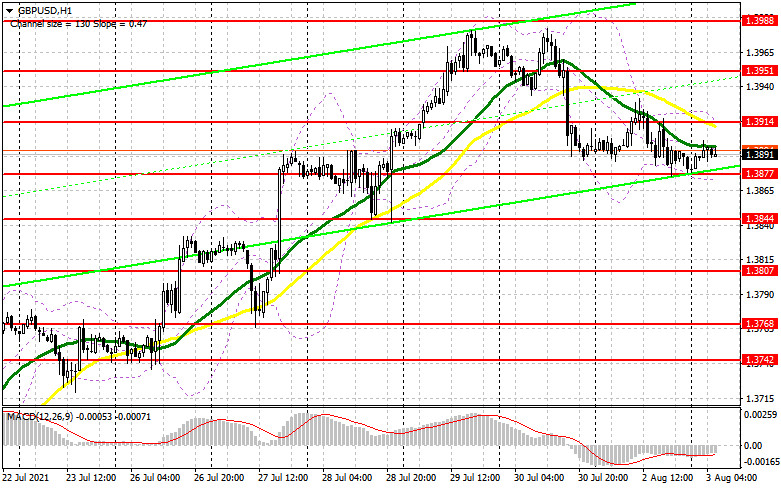 Trading is carried out below 30 and 50 moving averages, which indicates a decline in the pair in the short term.

A breakthrough of the upper border of the indicator in the area of 1.3910 will lead to a new wave of growth of the pound. Going beyond the lower boundary at 1.3875 will increase the pressure on the pair.

Interesting? Write a comment below.
 GBP/USD: plan for the European session on August 3. COT reports. Pound did not force events before Bank of England meeting
Forward 
Backward 