GBP/USD: plan for the European session on August 31. COT reports. Pound continues to move up against the euro. Aim for resistance

Several signals for buying the pound were formed yesterday afternoon. Let's take a look at the 5-minute chart and see what happened. Even during the European session, against the backdrop of low volatility, there were not many who wanted to continue buying the British pound at weekly highs. After it sharply fell at the beginning of the US session, the bulls actively defended support at 1.3741, forming a false breakout there and a good entry point for long positions, which led to continued growth in GBP/USD in today's Asian session.

Before examining the technical picture of the pound, let's take a look at what happened in the futures market. The Commitment of Traders (COT) reports for August 24 showed that long positions decreased and short ones sharply rose, which significantly affected the delta. However, all these changes do not take into account Federal Reserve Chairman Jerome Powell's speech from last Friday, who with his statements had dashed any hope that the US dollar would further strengthen this fall. Obviously, the positions of the bulls have changed a lot and I do not recommend giving serious attention to the current COT report. Considering that for the entirety of last week we have not seen any important fundamental statistics on the UK, it is obvious that the bulls will grab any opportunity to build up long positions, counting on good summer reports and a new round of strengthening of the British pound in the medium term. However, the fact that representatives of the Bank of England are in no hurry to talk about changes in monetary policy affects the activity of traders. I advise you to continue with the strategy of buying the British pound in case we observe any good decline. The lower the pound falls, the more active buyers of risky assets will begin to show themselves, betting on real changes in the monetary policy of the BoE in the future. The COT report showed that long non-commercial positions fell from 41,898 to 39,489, while short non-commercial positions jumped from 37,247 to 56,234, indicating an advantage towards the bears, but in fact this is not true right now. As a result, the non-commercial net position decreased and reached -16,746, against 4,651 weeks earlier. Last week's closing price dropped to 1.3723 against 1.3840. 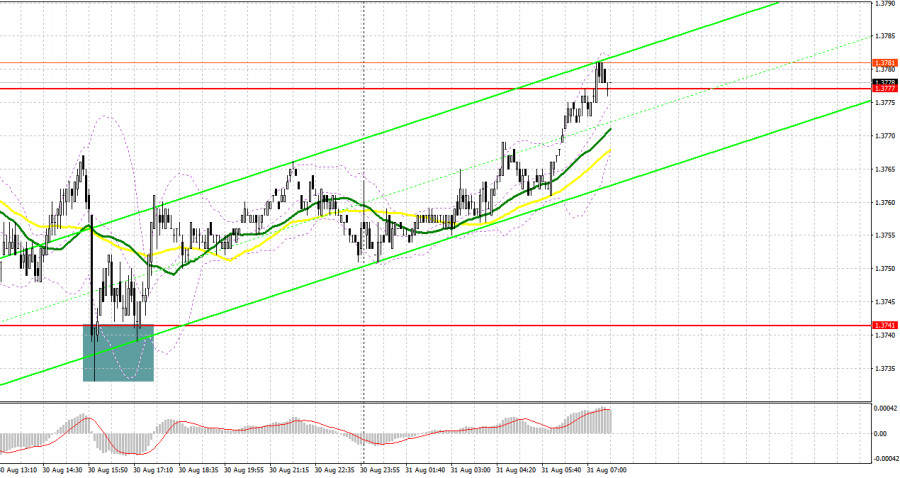 Today we only expect reports on lending, which, most likely, will not have an important influence on the pound's direction, which is preparing for the next jump to new local highs. Only a breakthrough and reverse test of the level of 1.3792 from top to bottom can create a new signal to buy GBP/USD, which will push the pair even higher - to the 1.3827 area. A breakthrough of this area will also open a direct path to a large resistance at 1.3868, where I recommend taking profits. The next target will be the high at 1.3904. If the pressure on the pair returns in the first half of the day, I advise you not to rush into long positions. An important task is to protect the support at 1.3752, where it is possible to build the lower border of the new rising channel. Moving averages, playing on the side of the bulls, also pass there. Forming a false breakout there can create a good entry point into long positions. Otherwise, the optimal scenario for longs will be the test of the next support at 1.3717, but even there it is best to wait for a false breakout. I advise you to watch buying GBP/USD immediately for a rebound only from a low like 1.3682, counting on an upward correction of 25-30 points within the day.

The bears are still struggling to recover from the strong bull rally that was seen last Friday. The primary task is to control the new support level at 1.3752, which was formed at the end of yesterday. A breakthrough of this area and its reverse test from the bottom up will generate a signal to open short positions in hopes that the pound would fall to 1.3717. A breakthrough of this range with a similar scenario can create another entry point to short positions with the goal of breaking the bulls' stop orders and a larger fall to the area of a low like 1.3682, where I recommend taking profits. In case the pound grows further in the first half of the day and we receive strong data on the growth of lending in the UK, which will contribute to the growth of retail sales, only a false breakout in the resistance area of 1.3792 will be a signal to sell GBP/USD. I advise you to open short positions in the pound immediately on a rebound from a larger resistance at 1.3827, or even higher - from a high of 1.3868, counting on the pair's rebound down by 20-25 points within the day. 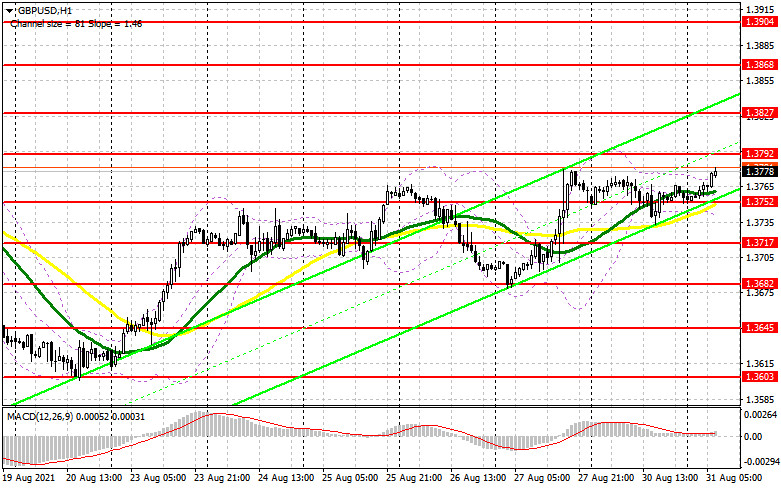 Trading is carried out above 30 and 50 moving averages, which indicates further growth of the pair.

In case the pair falls, support will be provided by the lower border of the indicator in the area of 1.3735.

Interesting? Write a comment below.
 GBP/USD: plan for the European session on August 31. COT reports. Pound continues to move up against the euro. Aim for resistance
Forward 
Backward 