GBP/USD: plan for the European session on August 4. COT reports. Pound bulls are looking for new benchmarks, as the Bank

Quite a lot of signals to enter the market were formed yesterday. Let's take a look at the 5 minute chart and talk about what happened and where you could make money. In the first half of the day, one could observe a false breakout in the resistance area of 1.3914, which resulted in creating a good entry point for short positions. However, each time the bulls managed to return the pair to this level, which indicated that control was retained on their side even in the absence of good fundamental reports. Closer to the second half of the day, an increase from the level of 1.3914 took place, which resulted in consolidating losses. Despite this, the US session made it possible to compensate for the losses and make money.

False breakout in the 1.3929 area resulted in creating a new sell signal, which was fully implemented by the fall to support 1.3890 from which a buy signal was subsequently formed, which led to the pound's recovery by another 30 points. An important UK services PMI report will be released this morning, which will remain at a fairly high level, which will help the bulls regain market sentiment ahead of the Bank of England walk-through meeting. The primary task of the bears, of course, is to protect the support at 1.3884, which is the lower border of the horizontal channel, and going beyond which does not promise anything good to the bulls. Forming a false breakout there will be a signal to open long positions in hopes that the pair would recover and continue the upward trend. If the the bulls are not active in the 1.3884 area, it is best to postpone long positions until the 1.3845 low is updated, and I advise to buy GBP/USD immediately on a rebound only from support at 1.3807 with the aim of an upward correction of 25-30 points within the day. Bulls also need to break out and settle above 1.3935, which is the middle of the horizontal channel, to gain more control over the market. The test of this range from top to bottom forms a signal to open long positions with the expectation of a return to the last month's high in the 1.3980 area. The further target is the resistance at 1.4019, where I recommend taking profits. 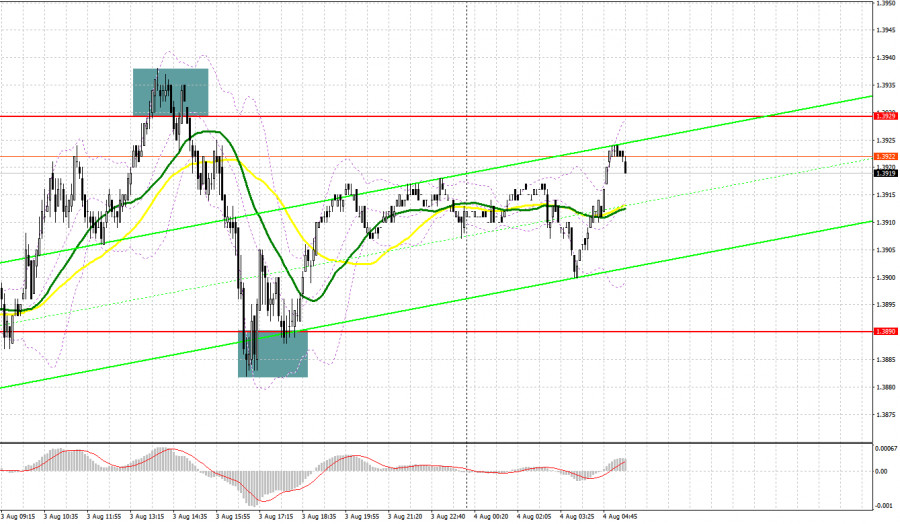 The initial task of the bears is to protect the resistance at 1.3935, which the bulls have successfully dealt with several times this week. Much will depend on the market reaction to the composite PMI report and to the UK services index, on which much of the economy is built. Forming a false breakout in the 1.1935 area will return pressure to the pound, which will create the first signal to open short positions in hopes that the pair would fall to support 1.3884, which the bulls stubbornly do not want to give up this week. The breakdown of this level will depend on the data on the activity in the US services sector, but this is closer to the second half of the day. The test from the bottom up at 1.3884 will hit the stop orders of the bulls, which will push the pound even lower - to the support at 1.3845, where it is worth considering taking profit.The 1.3807 level is the next target, but we can reach it only after tomorrow's Bank of England meeting on monetary policy. If the bears are not active in the 1.3935 area, I advise you to postpone selling until the next major resistance at 1.3980, or open short positions in GBP/USD immediately after a rebound from 1.4019, counting on a downward correction of 25-30 points within the day. 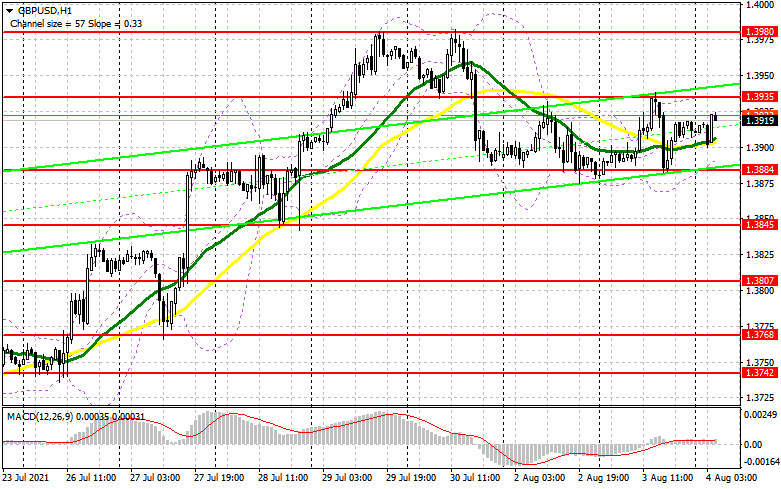 The Commitment of Traders (COT) reports for July 27 showed that long positions decreased, but sellers also did not insist and partially reduced their position volume. The pound's growth throughout the week allowed the GBPUSD pair to return to monthly highs, but failed to settle above. The panic after the lifting of all quarantine restrictions in the UK has receded and now the main focus this week will be on the Bank of England (BoE) meeting on monetary policy. The European Central Bank and the Federal Reserve did not change anything. Most likely, the BoE will do the same. Before abandoning stimulus measures, members of the BoE committee will probably wait for accurate data on how things are in the labor market. It is expected that a large-scale government program to support the labor market will be completed in September this year, which may force the central bank to take a longer wait-and-see attitude, since the central bank has not yet experienced any particular problems with inflationary pressure. If the representatives of the BoE start talking more and more about plans to reduce the bond purchase program, this will provide significant support to the pound. I advise you to stick to the strategy of buying the pair every time it drops significantly, as the major players do. The COT report indicated that long non-commercial positions fell from 44,223 to 41,194, while short non-commercial positions fell from 47,720 to 46,878, indicating a cautious approach to selling at current highs. As a result, the non-commercial net position remained negative and amounted to -5,684 against -3,496 a week earlier. Last week's closing price jumped from 1.3668 to 1.3826.

Trading is carried out just above the 30 and 50 moving averages, which indicates the sideways nature of the market in the short term.

Interesting? Write a comment below.
 as the Bank, GBP/USD: plan for the European session on August 4. COT reports. Pound bulls are looking for new benchmarks
Forward 
Backward 