GBP/USD: plan for the European session on August 9. COT reports. Pressure on the pound returned after the report on the US

The pressure on the British pound returned last Friday afternoon after the report on the US labor market, which surpassed all forecasts of economists. However, as we see on the chart, none of the major players is in a hurry to sell the pound so far. In my Friday morning forecast, I paid attention to several nearest levels, but I failed to achieve their test. Let's take a look at the 5 minute chart and see what happened. Too low volatility after the Bank of England's meeting on monetary policy did not allow forming signals to enter the market in the first half of the day. Only one single point of entry into short positions was formed immediately after the breakthrough and renewal of the 1.3907 level from the bottom up during the US session. Immediately after that, the pound fell to the support area of 1.3874, where volatility returned to normal again, and that was all. The growth prospects for the British pound should not be abandoned. I have repeatedly noted that as the pair declines, big players appear in the market each time they keep the medium-term upward trend. The lack of active short positions after Friday's data once again confirms this theory.

The growth prospects for the British pound remain pretty good. For now, the bulls need to try to protect the support at 1.3846, to which the pair is gradually sliding after Friday's reports. Considering that important fundamental reports on the UK are not expected today, the bulls are quite capable of such a task. Only if a false breakout is formed at the level of 1.3846, I recommend opening long positions. At the same time, the bulls' will aim for the resistance at 1.3878, slightly above which the moving averages, playing on the side of the bears, pass. The breakthrough and test of this area from top to bottom will create an additional point to buy the pound while expecting a return to the high of 1.3904, where I recommend taking profits. Further resistance will come out at 1.3944. If the bulls are not active in the 1.3846 area, I advise you not to rush to buy. The best solution would be long positions immediately on a rebound from a larger support at 1.3807, or even lower - from a low like 1.3768, counting on an upward correction of GBP/USD by 20-25 points upward within the day. 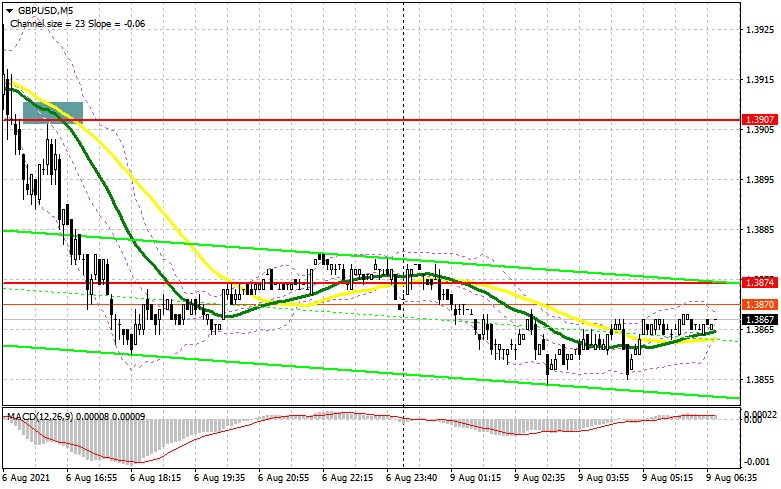 The initial task of the bears is to protect the resistance at 1.3878, on which quite a lot depends. The absence of important reports in the first half of the day may hinder the implementation of plans, therefore only forming a false breakout there will return pressure to the pound, which will create the first signal to open short positions with the goal of pulling down the pair to the next low of 1.3846. USD is even lower - to the lows of 1.3807 and 1.3768, the test of which will indicate forming a powerful bear market in the short term. I recommend taking profit around 1.3742. If there are no active bears in the 1.3878 area, I advise you to postpone selling until the next major resistance at 1.3904. I also recommend opening short positions from there only if a false breakout is formed. Selling GBP/USD immediately on a rebound is possible from the local high in the 1.3944 area, counting on a downward correction of 25-30 points within the day. 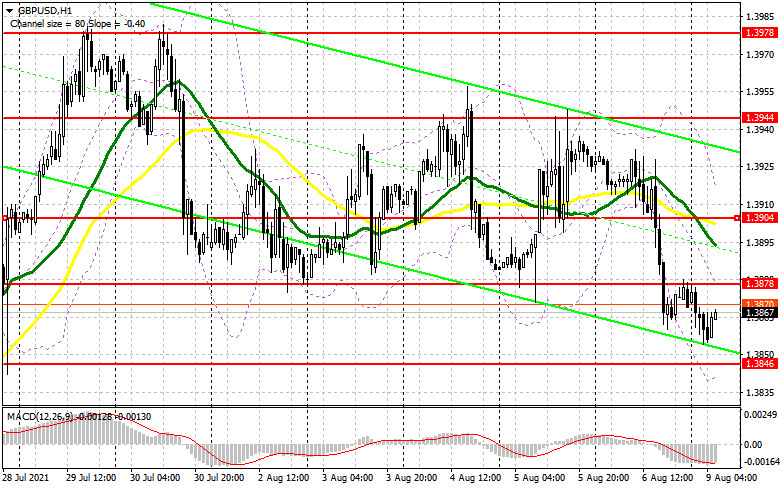 The Commitment of Traders (COT) reports for July 27 showed that long positions decreased, but sellers also did not insist and partially reduced their position volume. The pound's growth throughout the week allowed the GBPUSD pair to return to monthly highs, but failed to settle above. The panic after the lifting of all quarantine restrictions in the UK has receded and now the main focus this week will be on the Bank of England (BoE) meeting on monetary policy. The European Central Bank and the Federal Reserve did not change anything. Most likely, the BoE will do the same. Before abandoning stimulus measures, members of the BoE committee will probably wait for accurate data on how things are in the labor market. It is expected that a large-scale government program to support the labor market will be completed in September this year, which may force the central bank to take a longer wait-and-see attitude, since the central bank has not yet experienced any particular problems with inflationary pressure. If the representatives of the BoE start talking more and more about plans to reduce the bond purchase program, this will provide significant support to the pound. I advise you to stick to the strategy of buying the pair every time it drops significantly, as the major players do. The COT report indicated that long non-commercial positions fell from 44,223 to 41,194, while short non-commercial positions fell from 47,720 to 46,878, indicating a cautious approach to selling at current highs. As a result, the non-commercial net position remained negative and amounted to -5,684 against -3,496 a week earlier. Last week's closing price jumped from 1.3668 to 1.3826.

Trading is carried out below 30 and 50 moving averages, which indicates a bearish nature of the market in the short term.

Interesting? Write a comment below.
 GBP/USD: plan for the European session on August 9. COT reports. Pressure on the pound returned after the report on the US
Forward 
Backward 