If yesterday the market was literally marking time, today, from the very opening of the Asian session, the single European currency began to slightly rise. And this growth is exclusively speculative. The fact is that back on Friday, the euro's growth was not justified by anything, so a rollback is inevitable. Today, everything will depend on the data on inflation in the euro area, which may accelerate from 2.2% to 2.7%. Such a strong rise in inflation, against the backdrop of growing fears about the global rise in prices, will no doubt scare investors. After all, high inflation may well undermine the recovery of the European economy, which has just begun. Moreover, the Federal Reserve, being in a similar situation, is already preparing the market for certain steps designed to improve the state of affairs in the economy. While the European Central Bank continues to pretend that nothing terrible is happening, this worries market participants. After all, it may happen that the ECB will announce any measures quite suddenly and unexpectedly. The market may not be ready for this scenario. Thus, the rise in inflation in Europe will inevitably lead to a weakening of the euro. And the observed growth is a classic buy-by-rumor, sell-by-fact pattern. As a result, the subsequent weakening of the euro will simply turn out to be much more extensive. 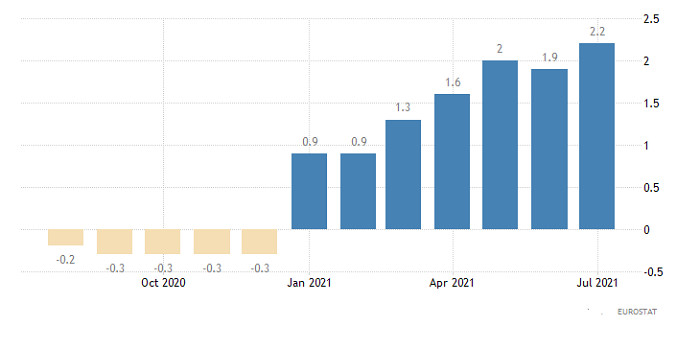 The correction from the base of 2021 is still relevant in the market. The upward movement led traders to break the short-term Fibo level of 61.8, as well as the medium-term Fibo level of 23.6. Whether this will be the beginning of an elongated correction, or whether we are dealing with local speculation, it will be clear very soon.

While there is only a high level of speculation during the Asian session, this may be a local manifestation in the market.

The technical indicator RSI is moving near the level of 70. This is a signal that the European currency is overbought. It is quite possible that a sell signal will be received.

On the trading chart of the daily period, there is a downtrend from the beginning of June. The market corrections from August 20 are still in the trend structure without breaking it.

The downward trend from the beginning of June, along with data on the overbought euro and speculative excitement, may ultimately lead to a reversal of the corrective move. This forecast will be confirmed if the price is kept below 1.1800.

An alternative scenario considers an inertial move, where speculators are not stopped by an overbought signal. This leads to a movement towards the medium-term Fibonacci level 38.2.

Comprehensive indicator analysis gives a buy signal based on short-term and intraday periods in view of the corrective course. 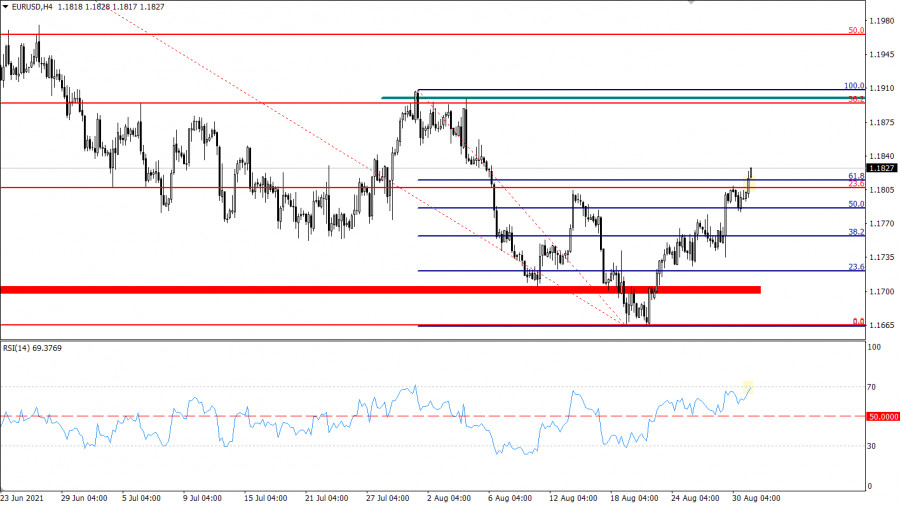