The past week ended with a completely sudden and unexpected growth of the pound. In fact, we are talking about speculation, which is not substantiated by anything. Formally, the reason for the pound's growth was Federal Reserve Chairman Jerome Powell's speech at the economic conference in Jackson Hole. But the content of his speech was predicted literally word for word. Powell, as an experienced politician who perfectly understands the responsibility entrusted to him, used exclusively verified and meaningless formulations. After all, he perfectly understands that any of his careless words can provoke a real storm in the financial markets. Indeed, the confident economic recovery was mentioned, regarding the temporary nature of inflation growth, as well as the Fed's intention to gradually roll back the quantitative easing program and raise the refinancing rate. But the fact is that everyone already knew it. Powell basically said nothing new. In addition, he did not set any dates, and did not even give hints as to when all this will begin to happen. And it is worth repeating again that Powell did not say anything new, which means there is no reason for fuss. However, the market behaved as if it was sure of a completely different development of events, expecting to hear specific dates and terms, and Powell's words came as a complete surprise to everyone. So what happened became the most primitive speculation. Consequently, today we can see a return to the values at which the market was before Powell's speech.

The pound did not manage to enter the recovery phase in relation to the corrective move. Instead, the quote returned to the area of the 50.0 Fibonacci level, where another stagnation arose.

The RSI indicator locally entered the overbought zone, above the 70 level. Which coincides with reaching the 50.0 Fibonacci level.

The trading chart of the daily timeframe shows a downward movement from the level of 1.4000. Market corrections are an integral part of a downward trend.

In this situation, we consider a reduction in the volume of long positions in the area of the Fibonacci level 50.0 - 1.3780. This can lead to a rebound in prices and, as a result, a change in trading interests.

Traders will consider an alternative scenario of the market development if the price stays above 1.3790. 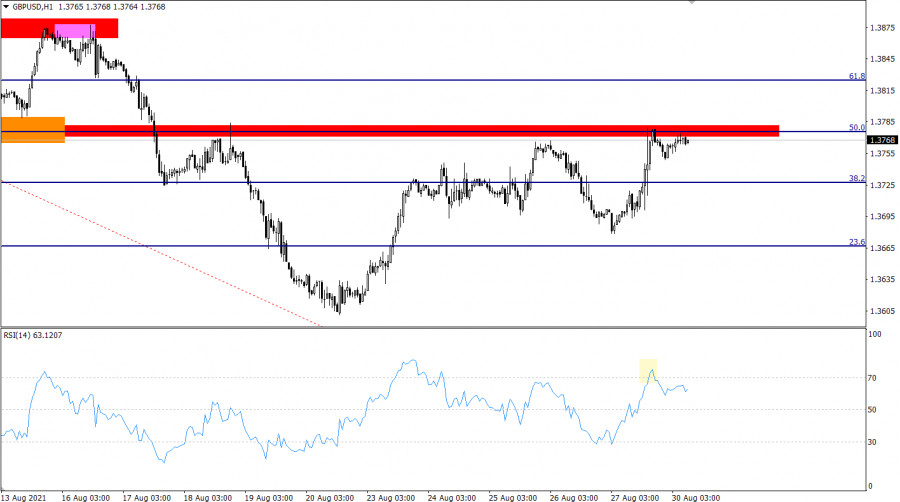