Kiwi prepares to take off. Overview of USD, NZD, AUD

Manufacturing ISM growth slowed slightly in July, showing 59.5p versus 60.6p a month earlier, however, manufacturing activity is still expanding. The report emphasizes that "all segments of the manufacturing economy are impacted by near record-long raw-material lead times, continued shortages of critical basic materials, rising commodity prices and difficulties in transporting products." As inventory is quickly depleted, backlogs are on the rise.

In general, an increase in demand for defensive assets should be noted, this was indirectly reflected in a sharp drop in oil following a decrease in prices for iron ore, raw materials are getting cheaper due to fears of the rapid spread of the delta strain of the COVID-19 virus around the world. China, yesterday, released worse-than-expected manufacturing PMI data for July, and fears are growing that this is the beginning of a new slowdown cycle as China experiences a new and very strong outbreak of the pandemic.

Today we expect mostly sideways trading in anticipation of the publication of the employment report on Friday. The dollar may resume growth amid growing demand for defensive assets.

Last week, we assumed that the kiwi is one step away from a bullish reversal. Today, there are slightly more signs that the decline has ended, which allowed the target price to return to the long-term average with an eye on further growth. The CFTC report for the kiwi turned out to be slightly negative, the net long position was reduced by 112 million to 99 million, the advantage is almost zero, but the dynamics in the bond market is clearly in favor of the New Zealand currency. 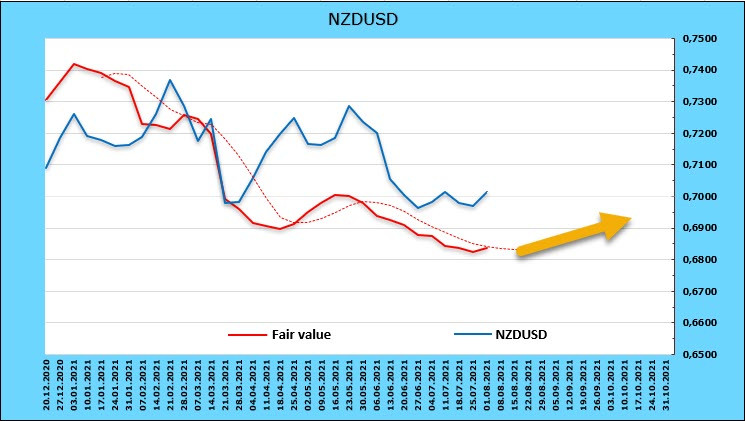 There's less than a day left before the publication of the quarterly employment report, which is of key importance for the forecasts for the next steps of the RBNZ. The unemployment rate is expected to drop from 4.7% to 4.4%, significant wages growth is also expected, and if the actual data turn out to be no worse than forecasts, then, according to analysts at ANZ Bank, the RBNZ will have no last doubts about the need to start a rate hike cycle.

The market generally agrees with these conclusions - over the past 2 weeks, the yield on UST has decreased, while the yield on 10-year bond yields in New Zealand, on the contrary, has grown, the dynamics reflect the bullish sentiment for the kiwi. Accordingly, the chances that the RBNZ will raise the rate in August remain high, this is a powerful bullish factor for the kiwi.

NZD is trading in a range on Tuesday morning, we assume that there will be an attempt to go up in order to test the upper border of the 0.7150/70 channel. Strong and unexpected news on USD may hinder the growth.

This morning, the RBA, as expected, left its key rate and target rate on bonds at 0.1%. The plan to gradually reduce bond purchases from $5 billion to $4 billion a week was also left unchanged, which was already a surprise, as there was growing confidence in the markets that the RBA, amid rising cases of COVID-19 and the introduction of new isolation measures, would look for a way to postpone these plans. Accordingly, the results of the RBA meeting turned out to be slightly more bullish than predicted, and the aussie got an opportunity for a slight upward correction.

The net short position of AUD increased by 281 million during the reporting week, to -2.897 billion, a trend versus aussie, the target price is still below the long-term average, but the rate of decline has clearly slowed down. 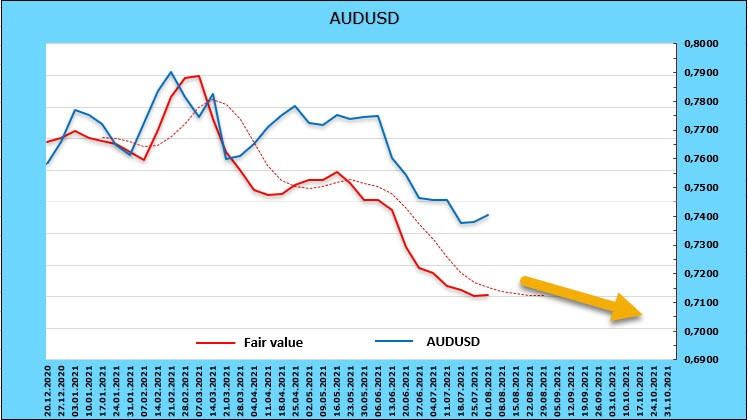 The most likely scenario is sideways trading in anticipation of US employment data. The Australian dollar was unable to strengthen against the background of the USD correction in the last week, possibly due to a sharp drop in iron ore prices, as well as China's decision to limit growth in some sectors of the economy.

A possible rise in AUD should be considered corrective for now, the resistance zone is 0.7460/80, where sales may resume. The Aussie managed to move slightly upward from the lower border of the channel, but the priority scenario is still a return to the lows to get out of the channel downwards, the long-term target is 0.6990/7060.