Overview of the EUR/USD pair. August 11. The "hawkish" statements of the Fed board members continue to support the dollar. 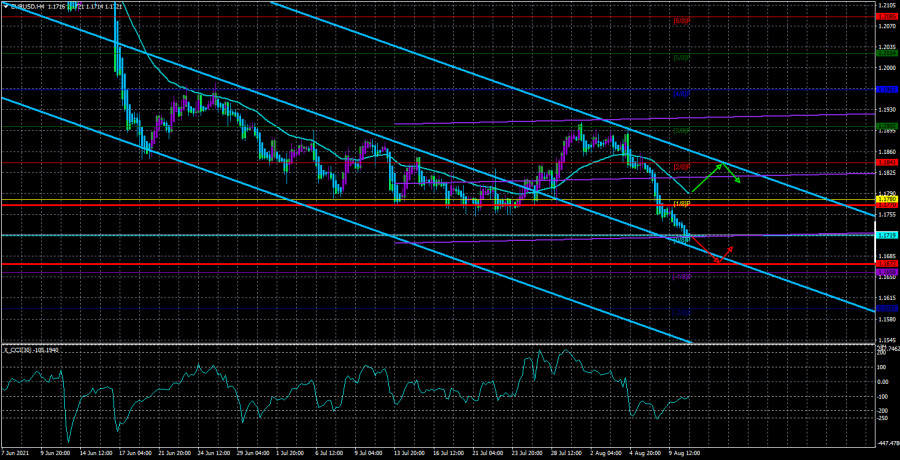 The EUR/USD currency pair has continued its downward movement in recent days. In total, about 170 points have been lost over the past week and a half, and the price has fallen at a relatively slow pace to its previous local minimum of March 31 (near the level of 1,1704). We have repeatedly talked about this level recently, although the technical picture looked as if the downward movement had already ended two weeks ago. However, in reality, the bears have found the strength to push the euro/dollar pair down a little more. Thus, at the moment, the price is still around the 17th level. Therefore, the moment of truth is now coming for the euro/dollar pair. If our assumption about two turns of correction against the global upward trend is correct, then in the near future, there should be an upward reversal with the resumption of the upward trend, within which the quotes should return at least to the level of 1.2240. Otherwise, the US currency will continue to rise in price, and we will have to look for the reasons for such a movement of the pair. It is no secret that the US currency has been under pressure in recent months and even years. However, it is impossible to say that this is the pressure of the market. After all, the Fed significantly increased its quantitative stimulus program a year and a half ago. The Fed has given itself the right to print almost any amount of money and pour it into the economy. Therefore, it is not surprising that the US dollar has sunk quite a lot in the last couple of years. Based on this factor, we are waiting for new turns of the dollar's fall as the QE program continues to be in effect. And it will continue to do this at least until the end of 2021, despite the abundance of "hawkish" rumors and hints from Fed representatives, which have overwhelmed the markets in recent months.

From our point of view, one factor can change the global trend to a downward one. It is a factor in the market's belief that the Fed will begin to wind down the quantitative easing program and raise rates next year. In this case, the demand for the US currency may increase significantly, which will lead to its growth. However, with this logic, questions arise: why has the US dollar become cheaper in the last year and a half? If the factor of the infusion of trillions of dollars has nothing to do with it, then why has the dollar been falling for so long? After all, the US economy only contracted very seriously at first, and in the last few quarters, it feels much better than the European or British one. And if the "Fed factor" still has something to do with it, why is the US currency growing now? In general, as always, we recommend that all traders have their own fundamental opinion. It is evident that each trader or analyst has their own opinion and may differ greatly from other opinions. But at the same time, when opening any trading transactions, traders should follow the technical picture. After all, any fundamental hypothesis must be confirmed by specific technical signals. Therefore, we continue to expect a new fall in the US dollar, but since the trend continues to be downward, then we should trade down.

The dollar has also been supported by Fed representatives Raphael Bostic and Thomas Barkin in the past few days. The first one said that he expects a reduction in the QE program already in the fourth quarter of 2021. However, he admits that this may happen earlier if the labor market recovers at a high pace recall that the last two months, the increase in NonFarm Payrolls was 900 thousand each). Thomas Barkin, in turn, said that inflation in the medium term has already reached the target level of 2%, so discussions on raising the key rate will begin in the near future. It does not mean that the rate will be raised in the near future: nevertheless, the majority of Fed members believe that rates will begin to rise no earlier than 2023. Also, the chairman of the Federal Reserve Bank of Boston, Eric Rosengren, voiced very "hawkish" rhetoric. He said that inflation could remain at the current level for a long period, and the conditions for reducing the QE program could be fulfilled as early as September this year. In general, quite unexpectedly, the beginning of this week was left for the US currency, which received great support from the members of the Fed. We note that Jerome Powell has not been inclined to "hawkish" statements recently. And the markets pay more attention to Powell's statements. However, with all due respect to Rosengren, Barkin, and Bostic, we cannot conclude that their statements have greatly influenced the foreign exchange market. The US dollar continues to strengthen extremely slowly. The volatility of the euro/dollar pair continues to be very weak.

For example, on Monday, it was only 34 points. If traders open the daily timeframe now, they will almost certainly see quite strong movements. However, this picture is deceptive. If you zoom out the chart so that the entire upward trend fits on the screen, it becomes very clear that the current decline in the pair's quotes at the moment does not exceed 38.2% by Fibonacci of the size of the entire trend. And this is although the pair continues to adjust for the seventh month in a row. During this time, it was able to fall from its highs by 600 points. The dollar rose by 6 cents. From our point of view, this is a relatively modest result. Currently, the price has come close to the level of 1.1704 (the last local minimum) and the level of 1.1690 (38.2% by Fibonacci). Therefore, it will be extremely difficult for bears to overcome this area. But if they still manage to do this, the US dollar will be able to continue strengthening. 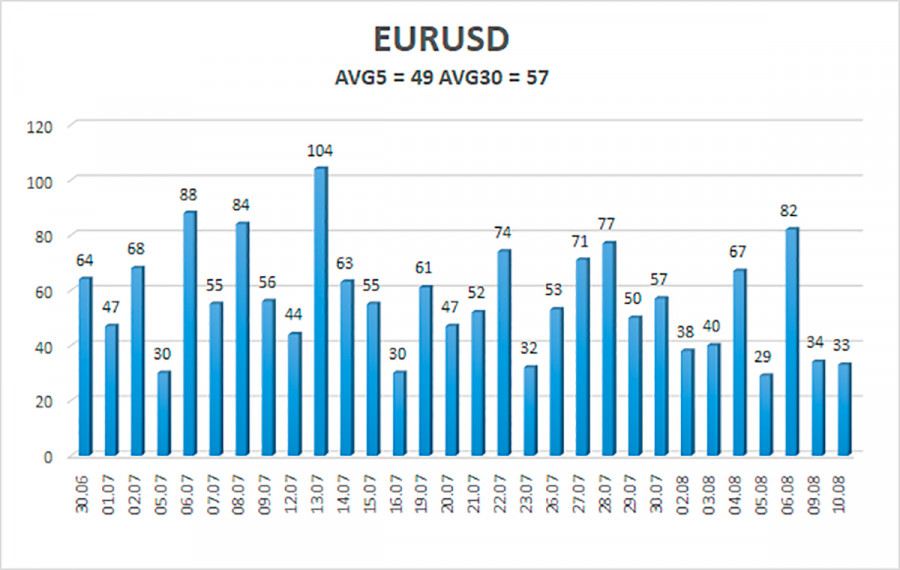 The volatility of the euro/dollar currency pair as of August 11 is 49 points and is characterized as "average." Thus, we expect the pair to move today between the levels of 1.1672 and 1.1770. A reversal of the Heiken Ashi indicator to the top will signal a round of upward correction.

Interesting? Write a comment below.
 Overview of the EUR/USD pair. August 11. The "hawkish" statements of the Fed board members continue to support the dollar.
Forward 
Backward 